Need a break from all the talk about intractable division? Tune in to Eric Liu.

A longtime advisor to Encore.org, the author of a new and compelling collection of civic sermons, and the innovator behind Citizen University and Civic Saturday — Eric is driven by a desire to bring people together across difference and divides to discover a “shared sense of purpose and sustain a common set of values.” Encore.org leaders Marc Freedman and Eunice Lin Nichols recently asked Eric about his thinking, his work and his view of the passage of time. Their conversation has been condensed and edited for clarity below. 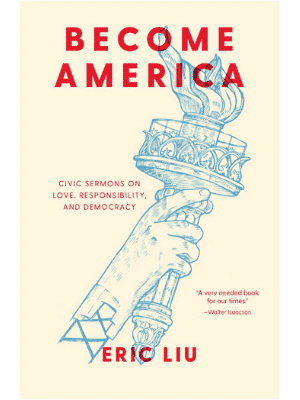 MARC: When you and I met decades ago, we were both working on mentoring issues. How did you get from mentoring to the work you’re doing today to build community and sustain democracy?

ERIC: I’ve always been interested in how we pass on what we know, how we sustain a sense of shared values and belonging and membership in a community. That spirit connects the work of mentorship and the work of citizenship. Before you get to policy and politics and elections and some of the more tangible aspects of civic life, you have to attend to bonds of trust and affection, a shared sense of purpose, and the ability and willingness to make meaning together.

Civic Saturdays emerged out of what we felt was a widespread yearning for opportunities to make that kind of meaning together in civic life.

MARC: Some of our earliest conversations hinged around the idea of generational divide. It seems almost quaint now as we face a wave of “OK boomer” “OK millennial” rhetoric. What do you make of the division in society today — and how do Civic Saturdays counter it?

ERIC: So many people have felt so isolated, disconnected from one another, separated by lines not only of ideology, but generation and other dimensions of identity. And it just felt like our society was missing a spirit of invitation to come and be with others to try to make sense of the ethical and moral inheritance that’s implicit in everything we do when we live in this community, in this country.

And so it was out of that spirit that Civic Saturdays were born and born specifically as a civic analog to a faith gathering. We really conceive of these gatherings as something akin to church or synagogue or mosque, even though it’s decidedly not a synagogue or church or mosque.

The gathering follows the arc of a faith gathering. It does so because it’s fundamentally about what we think of as an American civic religion and about the interplay of creed and ideals and values on the one hand, and practices and deeds and commitments on the other. How we show up for each other wherever we live here in the United States.

And so we created this ritual not only to answer that yearning that we were sensing all around us, but also because we’ve always been interested in finding creative and compelling, heart-centered ways to create a shared sense of purpose and to sustain a common set of values.

EUNICE: Are you seeing cross generational connection and common purpose in the Civic Saturday gatherings? Are they serving as an antidote to this broader notion that the generations really don’t have that much to learn from each other–that they’re, in fact, at each other’s throats?

ERIC: Absolutely. When we started Civic Saturdays in late 2016, from the very beginning, the very first gathering we held in Seattle was incredibly cross-generational. From infants brought there by their parents to elders in their eighties, we all crammed into a basement reading room of Elliott Bay Books in Seattle.

And as this phenomenon started to spread around the country, and as we started training other people to lead Civic Saturday gatherings of their own, one of the most common features has been this kind of cross-generational space and dialog and mutual learning.

I think there are relatively few spaces left in public and civic life where we are invited to engage each other across generational lines. And Civic Saturdays have been wonderful for that because the invitation is open to all. You get some boomers and millennials coming together in ways where you can make light of the stereotypes that attend each generation.

I can make light of the fact as a Gen Xer that “once again, you know, I’m being overlooked in this generation narrative.” And what allows us to make light of that is that we’re brought together to ask some deeper, cross-cutting questions at Civic Saturday, questions like:

These kinds of questions cut across generational lines; how people answer them reveals both generational differences and commonalities. And I think that’s been one of the most heartening things for us about Civic Saturday. Whether in small towns like Brownsville, Minnesota, population about 500, or in big-city settings like Detroit or Indianapolis or New York or L.A., you always get people coming together across these divides of life-stage in a way that makes them realize they were hungry for that. And that’s been very gratifying.

“I think there are relatively few spaces left in public and civic life where we are invited to engage each other across generational lines.”

EUNICE: Eric, when you gather such a diverse group of people, do you have to do anything to break down preconceived notions and stereotypes of one another before you can dig into the work? Or are the people who come already open to the views of others?

ERIC: A bit of both. We rarely have opened a Civic Saturday by explicitly speaking about generational tensions. That said, every Civic Saturday starts by inviting everyone to turn to a stranger and speak about a common question.

It’s in those moments that you get these interactions that very immediately cross lines of generation and other dimensions of identity. Having a common question illuminates generational differences without making the differences the point of the discussion. So that just promotes a kind of learning and open heartedness.

We both trust that the invitation and the container make possible that kind of intergenerational engagement and learning. And we help to sustain and accelerate it by having some punctuated points where we’re actually naming some of the tensions and differences that exist in a diverse room.

MARC: Can you talk about what’s next for the Civic Saturday movement—and how these efforts might intersect with the encore and Gen2Gen movements?

ERIC: When we started Civic Saturdays, word got around and people got really excited. People from other communities started inviting me and my team to come lead Civic Saturdays in their town. And we obliged to a certain extent and we continue to oblige. But that, of course, was not a super scalable approach—having us just run all around the United States.

So we created a Civic Seminary to train people from communities around the country to lead Civic Saturday gatherings where they live. We bring them out to Seattle for four days and train them not only in the nuts and bolts of how to run the gatherings and hold this kind of space, but also to get steeped in that deeper conception of American civic religion. That there is a creed and a set of ideas that unite us. That democracy itself is an act of intangible, mutual faith in one another. That democracy works only if enough of us believe democracy works.

The Seminary has now expanded into a full-blown fellowship that we are inviting people to apply to from all over the country. The fellowship begins with that four days in Seattle. And then over the ensuing nine months, our team supports people as they leave these gatherings in their own communities and it connects them with a network of fellow learners and fellow seminarians who become a community of practice for each other.

MARC: Do you see a connection between your work and our Gen2Gen initiative?

The ritual dimension of a Civic Saturday is very intentional. These aren’t just meetings. They’re not just get-togethers. They’re not just, you know, Saturday morning meetups. The reason why we have used the metaphor and frameworks of religion and faith is not only because democracy is itself an act of faith—not in a deity, but in one another—but it’s also because we believe that over the millennia, organized religion has figured something out about how to create repeatable experiences of ritual and ritual identity formation and meaning-making. And so Civic Saturday is very intentional in attending to that spirit level of citizenship.

EUNICE: How can people attend a Civic Saturday?

ERIC: You can go find a Civic Saturday near you by going to our website. You can apply for the fellowship in Civic Seminary and come get trained to lead these gatherings and build your own civic congregation of sorts wherever you live.

I can think of few experiences that would be more meaningful for people over 50 to apply what they know and who they are, their sense of moral and civic formation, and circulate that knowledge with others. What we’re trying to do is to create more invitations and more channels for that to happen, so that wisdom can get circulated intergenerationally.

MARC: Do you feel like moving into the second half of life has affected the work that you’re doing and the way you see this work?

ERIC: The passage of time has made me appreciate so much more that the thing that matters most is what kind of stewards we are and how we pass on to the next generation a society, a community, a body politic that is in better shape than when we first encountered it. With each passing year, I have a heightened consciousness that that’s all that matters. How are you trying to pass something on with fidelity and beauty and a spirit of love?

You know, people, individuals and communities do not renew themselves simply by pursuing market valuations of achievement. Self-renewal does not come from selfishness. It does not come from self-promotion. Self-renewal comes only, in a sense, from self-surrender to a story larger than yours, a purpose greater than yours. A sense of responsibility and obligation that’s bigger than yours. And I had an inkling. I had more than an inkling of that even in my twenties, as I’m sure you and Eunice did.

My father died rather young. A consciousness of the fragility of life and the urgency of trying to make meaning and make an impact — that was there for me from the beginning. But I would say, as I’ve gotten older, I’ve gotten more and more convinced that the things that we’re talking about here are not at the margins; they are at the core. They’re not the bonus; they’re the point. And I think that that spirit is what connects your work and mine.