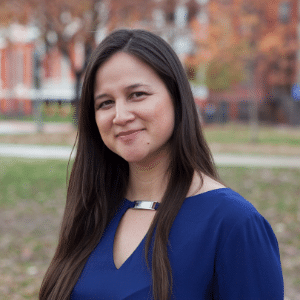 Co-Founder and Executive Director, Ashoka U

Marina’s work in social innovation dates back nearly 20 years to her student days when she first saw a social entrepreneur speak at Stanford University. Marina has led a systems-change effort in higher education for over a decade through co-founding and growing Ashoka U to be a global network of higher education innovators embedding social impact into the core DNA of campus culture, curriculum, and strategy. Ashoka U’s network engages 600+ institutions and 6000+ educators, and has influenced millions of students to practice changemaking.

Marina’s leadership style is about creating spaces where teams, partners, and collaborators can be infused with a sense of creativity, possibility, purpose, and psychological safety to fulfill their mission with clarity and power. Marina’s writing on innovation and higher education innovation has been featured in Forbes.com, SSIR.org, and the Diversity & Democracy Journal. Marina was named in the Forbes 30 under 30 for Social Entrepreneurship, received the post-graduate Tom Ford Fellowship in Philanthropy from Stanford, and is an Honorary Fellow of the University of Northampton. Marina holds a BA in International Relations from Stanford University.