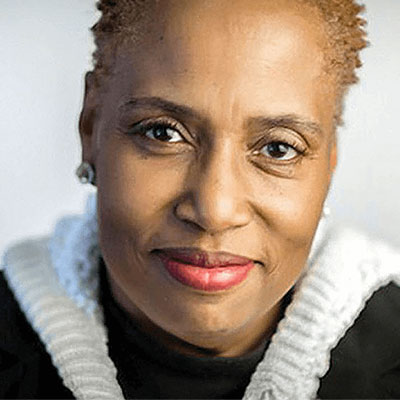 “In my third act, I am motivated by social justice in aging that includes women, LGBTQ/SGL elders, and Black people, creating welcoming environments for these populations while ensuring that elders are represented in all issues impacting them.”

Nationally recognized thought leader Dr. Imani Woody has been an advocate of women, people of color and LGBTQ+/SGL people for more than 25 years. She has spoken out locally and nationally about the circumstances of elder LGBTQ+/SGL individuals and the specific jeopardies that LGBTQ+/SGL elders of color face as they age.

Imani brought these perspectives and decades of community praxis to the 2015 White House Summit on LGBT elder housing development and partnered with SAGE as a panelist in the National LGBT Elder Housing Symposium in 2019.

Imani retired from AARP to become a pioneer in the building of alternative housing and creating welcoming environments. She is the founder and CEO of Mary’s House for Older Adults (MHFOA) with the vision and commitment to serve LGBTQ+/SGL elders experiencing housing insecurity and isolation.

Imani has secured an expert board of advisors and a commitment of $1.2 million from the District of Columbia to begin construction on a 15-room communal residence in Washington, D.C., which will be the first MHFOA dwelling in the country.

Imani has been a three-term appointee to the DC Office of LGBTQ Affairs and was appointed by Mayor Bowser to serve on the Global Age-Friendly Task Force. She was the first Program Officer for the 50+ Ministry of Metropolitan Community Churches and is the President of the Greater Brookland Intergenerational Village.

Imani has a Ph.D. in Public Service Leadership and a Master of Human Services degree from Lincoln University. She has received many awards including Next Avenue’s 2019 Influencers in Aging, Forbes Business of Pride, and the SAGE Creating Change Advocacy Award. She created a Living Life Like It’s Golden program that empowers people to live their lives more fully through visioning.