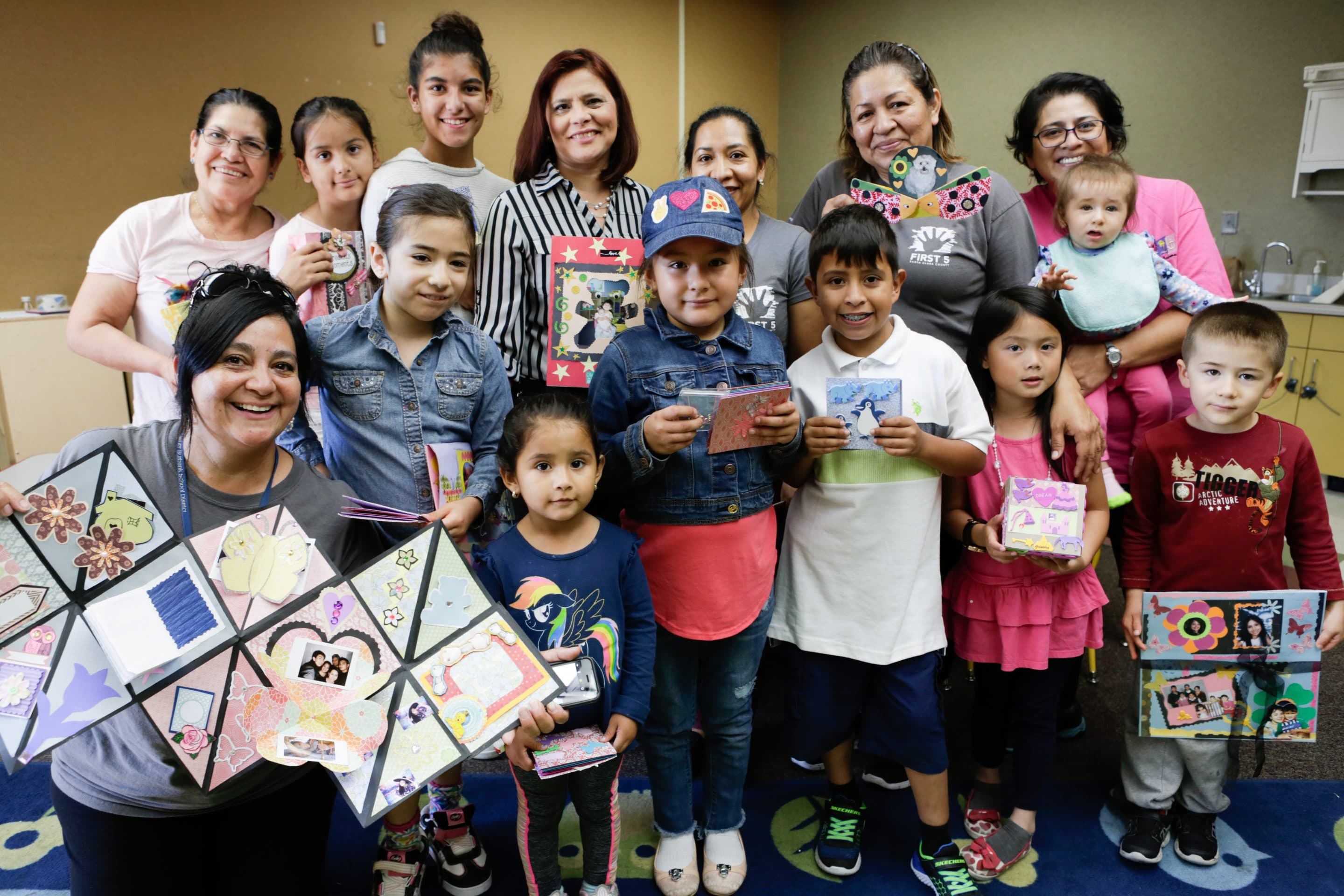 Before 3-year-old Fernanda was old enough to go to a local Head Start program, she and Amelia Morales Vargas, 64, used to spend a lot of time together. They sang about the wheels on the bus. They made crafts using popsicle sticks and glue. They explored local playgrounds.

Fernanda calls Vargas “abuelita,” grandmother, but it wasn’t blood or marriage that brought the two together. Instead, it was an innovative partnership between FIRST 5 Santa Clara County in California and Encore.org’s Gen2Gen initiative to engage more older adults in helping children and youth thrive.

What began as a pilot project in six Family Resource Centers two years ago has tapped the skills and talents of more than 280 older volunteers, some grandparents of children at the centers, and others, like Vargas, from the surrounding community. The pilot triggered a cascade of benefits for the community and for three generations — the children, their parents and teachers, and the older adults themselves.

“It’s changed my life,” says Vargas, who now volunteers regularly at Catholic Charities Family Resource Center at Educare, one of the centers funded by FIRST 5 Santa Clara. “I used to sit at home with no one to talk to, and I was always looking for something—anything—to do. Now, I feel like I have a purpose. It’s like I’m me again.”

“Our work historically has been with children zero to five, and over time we’d defined that as serving children and their parents,” says Keith Morales, deputy chief of Family Strengthening Services for FIRST 5. “We always knew that older adults helped care for young children in our county, but I’m not sure that we thought that it was a significant share.”

But Family Resource Centers funded by FIRST 5 were already in contact with many older caretakers — some grandparents, some not. They were the ones bringing toddlers in for activities like story time, waiting nearby while the kids played. Other Family Resource Centers shared space in buildings hosting programs for seniors, but aside from passing each other in the halls, the two generations didn’t interact.

In both cases, older adults were a resource hidden in plain sight.

So FIRST 5 and Encore.org partnered to put them to use. Beginning in July 2017, their pilot aimed to recruit 10 stipended volunteers over 50 years old at each of six different Family Resource Centers throughout Santa Clara County.

Once engaged, older volunteers took on everything from sharing cultural traditions with the children and staffing gardening and cooking activities to writing grants and providing administrative support, freeing up staff to focus their attention elsewhere. Volunteers were paid a modest stipend (via gift cards) to support their time and effort.

At the Catholic Charities Family Resource Center at Educare, the volunteers got an early boost from a group of older women (including Vargas) who had banded together to do community work some 15 years before but lacked a place or reason to get together regularly.

“They call themselves the quinceañeras,” laughs Rosalio Estrada, the center’s program supervisor. The title—traditionally used for girls celebrating their 15th birthday in Latino culture—suits them, she says.

“They are so active and they have so much energy that they’re like young teenagers wanting to do a bunch of stuff. A lot of times, instead of getting them excited about projects, I actually need to be the scoldy mom, pulling them back down to earth.”

Encore.org provided FIRST 5 and the Family Resource Center staff with tools, technical assistance, professional development and one of its trademark Encore Fellows™.

FIRST 5’s Encore Fellow, former technology exec Bob Crum, is one of many experienced, 50+ professionals matched with social-purpose organizations for year-long, high-impact projects. More than 2,000 Encore Fellows™ have been placed since 2009. Crum helped get the project launched, with the hope that it would become self-sustaining after his tenure.

Crum’s steady footwork coordinating meetings and deadlines, and doing outreach to potential partners like senior centers and senior-serving organizations, helped busy center staffers who were worried about the new duties the pilot might entail.

Beyond that, though—and perhaps more importantly—Crum served as a sort of cross-generational ambassador, suggesting everything from a more age-inclusive web presence to different approaches to hiring and programming.

“The average Family Resource Center program manager is under 35 years old,” says Morales. “So having a Fellow giving on-the-ground, live information about what he’d like to contribute to if he was a volunteer himself helped staff realize that this wasn’t really about doing more work. It was about being more mindful and incorporating a new group into the work that already existed.”

The addition of an Encore Fellow proved critical in helping FIRST 5 bring more older adults to the mix, expand their centers’ capacity and improve quality. The pilot also succeeded on many other fronts.

While Fernanda has moved on to join a preschool classroom, “I’ll keep coming to the Family Resource Center as long as I’m able to,” says Amelia Morales Vargas. “I really love the kids. I’m there for them, and they are there for me.”

“Success for me,” says FIRST 5’s CEO Jolene Smith, “will come when it’s inherently known in our communities that older adults belong with young children. That’s when we’ll start seeing the shift around some of these biases that we have around older adults. I do think that we’re getting there.”

To join Encore.org’s national listserv of practitioners, leaders and entrepreneurs interested in ideas for engaging adults 50+ in early care and education, send an email to [email protected].