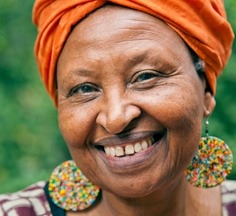 When Wanjiru Kamau, a university administrator and adjunct professor, met the asylum seekers – victims of the Rwandan genocide and relatives of her colleagues at Penn State – she saw that some were illiterate and bewildered by modern city life.

Seeing them took her back to her own childhood, growing up in rural Kenya without running water or electricity, carrying heavy loads on her back. How would they survive in a complex society like the United States?

“I need to help,” she thought, knowing both what the Rwandans had suffered and what lay in store for them here. An immigrant with expertise in mental health and intercultural communication, Kamau knew she was well-equipped to help Africans adjust to American life.

“This is why I was educated, to give back,” she thought. Her four children were grown. She was free of that responsibility. Rather than “Why me?” she thought, “If not me, who else?”

She quit her job, withdrew $10,000 from her retirement account and moved from Pennsylvania to Washington, D.C., in 2000 to start a nonprofit to help African refugees and immigrants.

Since 2000, the organization has provided professional help and referral services to more than 6,000 immigrants from 45 countries. It has offered mentoring and tutoring to more than 600 students in nine schools; guided more than 200 families through African parent empowerment training; assisted 13 girls in trafficking cases; mediated 17 domestic violence cases; and served more than 1,400 mental health clients in 27 different languages. The group, which has held eight annual conferences, has given African cultural training to more than 2,500 school counselors, caregivers and others who work with African immigrants.

In the 1990s Africans started pouring into the United States, becoming the fastest growing immigrant population. Their numbers in the Washington area grew from approximately 80,000 to 200,000 in 10 years. On arrival Africans, like other immigrants, are overwhelmed by an endless “to do” list – from finding housing, jobs and child care to learning English and survival skills.

Unlike many foreigners, they also bear an array of burdens stemming largely from colonial repression and exploitation and the continent’s wars. Those hardships include trauma from loss and family separation; severe poverty; cultural and linguistic barriers; and, often, illiteracy.

One family’s pain and promise

Take Sukali (a pseudonym), a Congolese refugee who arrived in Washington in 2004 with four of her children, a niece and three orphans whose parents had been killed during the war. The family spoke no English, and the children were teased and bullied by other kids in their low-income apartment complex. Lutheran Social Services provided for their physical resettlement needs, says Kamau, “but not psychosocial, cultural and linguistic needs.”

Not knowing where to turn, Sukali ordered the children to always to keep their windows shut with the curtains drawn; she told the younger children never to go outside alone to play. The harassment did not stop.

One day, the bullies invaded the apartment and fought with the children. Sukali called 911, but when the police came the intruders showed their bruises and accused her. Sukali, who could only say, “No English, no English,” was taken away in handcuffs.

Though traumatized, the older children were able to call a teacher for help. The teacher contacted Kamau’s group, which provided interpretation and posted bail for Sukali. Later, the group provided counseling, helped find the family a rental house and connected them with other African immigrants, American families and a church.

The family eventually began to thrive and, with the foundation’s help, the father and the other two children joined them in 2009. AIRF also helped Sukali complete intermediate English classes. She and her husband are now working. Despite serious problems between them due to their long separation, all the children have succeeded academically or are gainfully employed.

Kamau, 69, orchestrates a host of programs, often leading the hands-on work. “Mama Kamau,” the kids call her, and African parents, respectful of age, listen to her. A dozen consultants (most part time) and some 35 volunteers (including pro bono lawyers and psychologists) help her, and the foundation partners with state and local governments, schools and universities. The programs include:

The foundation’s signature effort is the Catching Up Program (CUP) for students to address issues such as low self-esteem. (African students are picked on and bullied for such things as their “smell” and their accents and are told to “go back to Africa.”) The program also focuses on education interrupted by war and difficulties with parents and grandparents still following African ways of parenting.

CUP groups meet twice a week after school in “Africa Clubs” at nine elementary, middle and high schools. School staff and outside volunteers attend and provide support and counseling to promote good relationships at school and home. Leadership training, civic education and Africa-focused discussions are part of the mix. On Saturdays all the students get together with college students for academic help, discussions, games, sports, field trips and meals.

CUP seeks to give students a positive African self-image that can coexist with the American identity they crave. Kamau likes to begin conversations with, “Who are you, and where are you from?” She always carries a map of Africa. “We become Africans at the port of entry,” she explains. “Before that we are Nigerian or Kenyan or…” She wants students to embrace their identities and respect their differences.

Members support each other in many ways – help with homework and advice on how to navigate the school system, extracurricular activities and work opportunities. They cook native dishes together and join in representing their countries in dance, song or play.

College junior Ruby B. Johnson, who emigrated from Sierra Leone and Nigeria at age 12, says her high school Africa Club provided a “space for me to bond with other Africans” that led to strong friendships. The club also gave her the chance to write and direct a play that was performed at AIRF’s annual conference.

Troy Massa, a college senior born in the United States to a Sierra Leonean mother, says Africa Club and an internship with AIRF taught him to walk tall and say, “Yes, I am an African,” rather than take refuge in, “I was born in America.” He also learned that Africans could succeed, contrary to the negative message about Africa he says he found in his school curriculum.

CUP has had a remarkable record at Cordozo High School in Washington, D.C. In the past two years, all 17 students in the club graduated, and last year all 13 went to college. The class valedictorian was Ethiopian. Before the club, says sponsor and ESL teacher Waheedah Shakoor, some Africans were harassed by other students and dropped out.

CUP illustrates Kamau’s holistic attempt to treat whatever ails the child. A problem evident at school may originate at home. Kamau calls CUP “the door” to the family, because students also share whatever problems their parents may be having.

After 11 years, Kamau is still going strong, though she draws no salary, has no private health insurance and became a vegetarian to save on food costs. “There are days I wake up and feel 15,” she says, smiling.