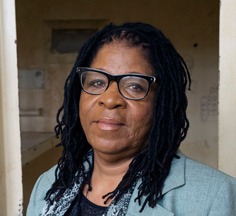 Burton gives female parolees tools for rebuilding their lives after prison and advocates nationally for such support.

At 46 years old, Susan Burton didn’t have a lot going for her. It was 1997. She was fresh out of jail, and not for the first time. On her way out the prison guard said, “I’ll see you back in a little while.”

It wasn’t unlikely. Years before, Burton’s 5-year-old son had been killed when he ran into the street and was struck by a car being driven by an off-duty police officer. Wild with grief, she took drugs, became addicted, got arrested for a nonviolent crime, went to prison, got out and then did it all over and over again for nearly 20 years. Her relationship with her daughter, who was 15 when her brother died, collapsed.

But this time a friend helped Burton find a job as a live-in caregiver for an elderly woman. Wanting to further improve her life by staying off drugs, Burton went to a treatment facility. The help she got in treatment made her realize that there was “another way.”

Soon she had saved $12,000 and bought a bungalow on a flat, sun-baked street in South Los Angeles, a notoriously rough neighborhood. Finally, she was ready to start anew.

Staying sober was one thing. Finding support was another.

“I just knew that doors were shutting everywhere,” Burton says.

When she tried to sign up for a program to become a licensed home care aide, for instance, she found out that a felony conviction meant she could never earn a license in the field. Virtually all the resources an addict trying to keep clean and out of jail might need – food stamps, housing assistance, easy employment access – were out of Burton’s reach because of her record.

Steadfast about not going back, Burton came up with a new plan. “I know what I can do,” she recalls thinking. “I can help other women like myself, and nobody can stop me.”

From her years in the prison system she knew that buses bound from southern California prisons routinely deposited parolees in downtown Los Angeles’ Skid Row, an area infamous for rampant drugs, crime and homelessness. Three or four buses pulled up every day, dropping off inmates with about $200 (money parolees receive upon release) and often nowhere to go.

So in 1998 Burton started going to the bus depot and inviting women she recognized to stay at her place. She converted an alcove off the kitchen into her bedroom, and the women slept four to a room in bunk beds.

About a year later, Burton was paying for everything with her rapidly diminishing savings. She had lost her job when the woman she had been caring for was admitted to a full-time care facility. Burton heard that a local church was giving away bus tokens, so she tried to get some for the women living with her. It was getting harder to pay for their bus fare herself.

But the church group told her she needed to incorporate as a nonprofit organization to qualify for the tokens. Until that day she had never considered running a nonprofit. Though she had been helping others for two years already, A New Way of Life was officially born in 2000.

A friend then helped her successfully apply for a grant. Twelve years later, Burton’s shelter has grown to five transitional residences in downtown Los Angeles that have served a total of 600 people. The organization operates on a $1 million budget, with 10 employees managing services for women rebuilding their lives after prison, including lodging, food, legal aid and job training.

Sixty-five percent of California parolees will return to jail within three years, according to the state corrections department, and about half of those will do it within the first six months. By comparison, Burton estimates that of the 500 former inmates she has tracked at 18 months after leaving the shelter, around 80 percent were employed or taking classes and had not returned to jail.

In 2011, A New Way of Life’s five homes served 40 women and 13 children at about a third of the cost of incarceration, which in California averages about $47,000 annually per inmate, according to the state department of corrections.

Now that word is out, Burton doesn’t go to Skid Row anymore. Inmates write to her, and she shuttles them from the prison gate to one of her clean, bright homes. Most of the women stay between nine months and two years. For women with children, A New Way of Life assists with the legal process of parent-child reunification, gathers paperwork for schooling, secures reliable child care and more.

On a late July afternoon, the scene in one of the homes looks idyllic. Stacey Johnson, 45, who has lived there a year, folds laundry in her bedroom as sunlight streams in. Down the hall, a woman and a little girl in braids draw pictures, while out in the living room another woman types on a computer.

While Johnson sifts a pile of clothes, she explains she’s been sober four years, and even has a job caring for an elderly neighbor. “I really respect Ms. Burton’s passion for helping women,” she says. “The resources are here if you’re ready to change.”

Recently, A New Way of Life has moved beyond basic social services. The organization now distributes $2 million in donated goods each year – everything from diapers to can openers.

Beyond the shelter, A New Way of Life runs a free legal clinic. In 2006, the organization partnered with the UCLA School of Law to look at options for reversing some of the institutional disadvantages former inmates face – “the scarlet letter of being an ex-con,” in the words of Saul Sarabia, former director of the law school’s Critical Race Studies Program, who helped develop the legal clinic.

What grew from there is, according to Sarabia, California’s largest agency helping people to expunge criminal records – an important step toward employment. Since 2008, A New Way of Life has successfully purged hundreds of criminal records and fought denied applications for licenses in various fields, such as home health care. Already three clinics like it have opened in southern California, with a fourth on the way.

These days, Burton is working with Sarabia and others to document everything the shelter does and distill it into a package she can present. “How would I go to St. Louis and talk to government and communities?” she says. “I’m creating a marketing model.”

To that end, Burton has been grooming a successor, a former resident, to run A New Way of Life.

Now Burton is advocating for former inmates on the national level with the groups All of Us or None and the Formerly Incarcerated & Convicted People’s Movement, both of which she helped found. With about 1.6 million people currently incarcerated, and 95 percent of state prisoners slated for release, the need is great.

“I think we all want to make an impact,” Burton says. Even though her opportunity to do so happened later in her life, it “didn’t mean it was too late. It meant if it was going to happen, I had better get busy and make it happen.”

She’s made it happen in the eyes of her once estranged daughter, now 45 with two children of her own. “She thinks I’ve succeeded beyond our wildest dreams,” she says. “It makes me feel really good.”

2015 Update: Susan Burton received the James Irvine Foundation Leadership Award in 2014. In 2015, the Los Angeles Times named her one of the nation’s 18 New Civil Rights Leaders. A New Way of Life (ANWOL) re-entry homes have provided safety and support to more than 850 women and children, with over 160 women reunited with their children, and have helped more than 3,000 formerly homeless individuals acquire needed items to establish their own homes. Since ANWOL’s inception in 2007, its legal department has provided pro bono services for over 2,000 formerly incarcerated and convicted individuals.