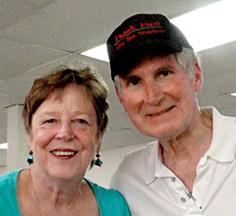 Bob and Barbara engage adult Navajos with paraplegia as Voices for Injury Prevention to prevent brain and spinal cord injuries among Navajo youth.

In 2005, Robert Crowell and Barbara Crowell Roy’s lives changed forever. Their daughter, a 30-year old successful corporate attorney, Eve Crowell, accidentally died from a drug and alcohol overdose. Robert was months away from retiring from his long neurosurgery career; Barbara was teaching English as a second language in Switzerland.

After Eve’s sudden death, they channeled their grief into action.

Their first and largest program, ThinkFirst Navajo, seeks to prevent fatal and disabling injuries. “I learned that the death rate from vehicle crashes on the reservation is more than triple the national average, and an even higher number of people–many of whom are children and young adults–sustain brain and spinal cord injuries,” Robert recalls. ThinkFirst Navajo is the only chapter of ThinkFirst National Injury Prevention Foundation serving Native
American youth.

Together, the pair developed partnerships with school districts and
engaged adult Navajos with paraplegia to become VIPs (Voices for Injury Prevention), inviting them to share their personal injury stories with students across the Navajo Nation. To date, the ThinkFirst Navajo program has taught more than 22,000 children in grades 1-12 about injury prevention.

“For as long as we are able, Eve’s Fund and ThinkFirst Navajo will continue to be our life’s work,” says Robert and Barbara. “Named in our daughter’s memory, Eve’s Fund is our encore career and Eve’s legacy.”