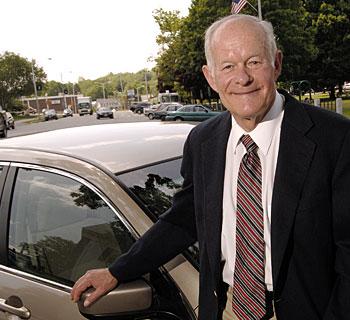 Over a varied career in business, Robert Chambers had occasion to work as a car salesman, where he saw both the routine ways dealerships prey on low-income buyers and the bind that rural low-income buyers are in – they don’t qualify for a loan to buy a reliable car and, without one, they often can’t get a job that would allow them to build up their credit. So in 2001, Chambers created More Than Wheels (formerly Bonnie CLAC – Car Loans and Counseling) to provide car loans at low-interest rates to low-income buyers, offer financial management courses, and help people get a leg up on a middle-class life. To make it work, Chambers works out agreements with car dealers and banks, and More Than Wheels guarantees the loans. So far, more than 725 people have purchased cars with help from Chambers, saving an average of $7,000 over five years.

Whenever Tifaney Angeli would argue with her ex-boyfriend, he had the ultimate trump card: the car. They had split up, and the car was technically his grandfather’s. But with a job, school, and two young children in tow, Angeli knew she couldn’t afford to lose it.

“It seemed like every time we argued I was threatened with having the car taken away from me,” said Angeli, 30, of Portsmouth, New Hampshire.

Then Angeli got in touch with Robert Chambers. She had no car-buying experience, messy credit from backlogged medical bills, and no money to put down. Ten days later, thanks to Chambers and his innovative non-profit, Angeli had her own Honda Civic, with a low-interest-rate loan.

Chambers, a former car salesman who grew disgusted with the industry, started More Than Wheels five years ago to help people who would otherwise have no chance of getting a good car at a decent rate find their way into new Hondas, Toyotas, pick-up trucks and other vehicles.

The non-profit with the odd name acts as part-broker, part-guardian angel for low-income car buyers. It sets them up with loans at low interest rates and takes care of the dealership haggling that can saddle them with inadequate cars at inflated prices. A financial management course comes with the package, too.

Chambers, 61, sees More Than Wheels not just as the means to a new car, but as the catalyst for a better life. The program offers a way to develop better credit, a tool to learn about budgeting, and, in rural New Hampshire, the most basic necessity for getting and keeping a well-paying job.

“Most of the time people don’t realize they can own a new car,” Chambers says. “It changes their lives and their self-image.” Beyond that, Chambers adds, “It’s very difficult for low-income individuals to get their credit straightened out without help. Without our guarantee, many of them would never dig out.”

To date, More Than Wheels (formerly Bonnie CLAC – named for Car Loans and Counseling), has put 727 people in new cars and saved the average client $7,000 in inflated car costs, fuel and repairs. The proof is on the Lebanon headquarters’ so-called “Wall of Fame” — picture after picture of More Than Wheels clients and their new cars.

More Than Wheels’ formula is deceptively simple. Chambers has negotiated deals with a half-dozen car dealerships, promising them a steady supply of purchases in exchange for sales that are slightly above the invoice price. For the dealers, it’s a no-brainer; for Chambers’ clients, it’s a car for far less than they could have ever arranged.

The organization also has agreements with Chittenden Bank and the Northeast Credit Union, which give clients the same low-interest rates as customers with stellar credit reports — and More Than Wheels guarantees the loan.

A financial literacy course and individual budget counseling complete the information and education component of the program. Clients develop close personal relationships with More Than Wheels’ Client Consultants – resources they can call on in the future. They soak up information about credit, interest rates, fuel economy, and negotiating the best insurance rates. As a result, clients become committed to a successful purchase. In five years, only 16 More Than Wheels car buyers have defaulted.

While More Than Wheels is a non-profit, it’s meant to make money for both the car dealerships and the banks — that’s one big reason it works, Chambers says. Just not too much money. “I want this to be profitable for them, I just don’t want it to be excessively profitable,” Chambers adds.

Unlike car dealerships or banks, More Than Wheels doesn’t screen clients based on credit. The only thing prospective car buyers have to do is show they have a job and can budget for the monthly payments. (Chambers said More Than Wheels won’t buy a car for someone who’s unemployed, but it can help someone by providing a “bridge” or temporary car so they can land a job and get on track.)

“We get very close and personal with people’s budgets,” Chambers explains. “We won’t guarantee a loan if there’s not evidence that they can make the payments.”

More Than Wheels is seeking to wean itself from grants through a fee that is added to buyers’ financing packages; it works out to about $12 per month, a small charge for such substantial savings. Chambers says the organization will become self-sufficient once 40 people a month are buying cars. Right now they’re just over half that, arranging about 24 purchases per month in New Hampshire, Vermont, and Maine.

Usually those who come to Chambers can make car payments if they set priorities and learn how to budget. “Many low-income individuals don’t budget very well and don’t spend very well. Some of it’s ignorance and some of it’s habit,” Chambers says. “In many cases there’s a significant amount of money being spent within the budget that can be reconfigured.”

A lanky man with the charm of a Southerner and the strict self-help ethos of a New Englander, Chambers might seem like an unlikely car-granting savior.

His resume is as wide-ranging as they come, with careers in the Navy, the computer industry, and fundraising, and he can count great successes (developed the first computer phone line across the U.S.-Canadian border) and grandiose failures (went belly-up in the stock market crash of 1987) as parts of his past.

An electrical engineer who grew up poor in Georgia, Chambers has a unique ability to cut across class lines. He can just as easily talk to a bank executive in the corner office as he can a debt-laden customer who can’t get a low-interest car loan.

Still, it was Chambers’ late-in-life career as a car salesman that gave More Than Wheels its start. “I learned stuff that made me sick about the car business when I was there. The whole industry preys on the poor,” he says. Women, he found, were especially vulnerable. They lacked the negotiating skills of most men — and didn’t have the car expertise either.

Chambers started More Than Wheels (formerly Bonnie CLAC) in 2001, naming it Fannie CLAC, because it was loosely modeled after Fannie Mae. But Fannie Mae didn’t like the homage and Chambers soon had to change the name.

He wanted to stay with a woman’s name (73 percent of the clients are women) and ran through the list of possibilities. Bonnie was free.

Chambers says his jack-of-all-trades life has enabled him to conceive and carry out More Than Wheels. After all, he’s had to bring together banks, businesses, and nonprofits and then convince people who have never budgeted that they can keep their finances under control. He says he’s needed the experiences of a lifetime and a deep understanding of banking to make it happen.

Today the group has 12 full-time staffers, a no-frills office in Lebanon, New Hampshire, and satellites in Portsmouth, Manchester, and Keene.

Chambers’ big goal is to take More Than Wheels nationwide, but he says his greatest challenge is trying to “grow the organization, without growing it too quickly.”

Michelle Brannen, 35, of Bedford, says More Than Wheels can’t grow fast enough. Brannen had a typical More Than Wheels story — troublesome credit, inexperience, and an immediate need for a car. Four years ago she was nine months pregnant and her car lease was up. She was about to “just get a junk car and do whatever I could to keep it going,” but her mother-in-law read an article about More Than Wheels and pointed her there instead.

More Than Wheels talked to her creditors and worked out a payment plan — and extended her car lease through the pregnancy. Soon thereafter Brannen found herself behind the wheel of a new Honda Civic.

“They made a world of difference for me,” she says.

NOTE: Chambers created Bonnie CLAC in 2001. In 2011, the organization’s name changed to More Than Wheels.