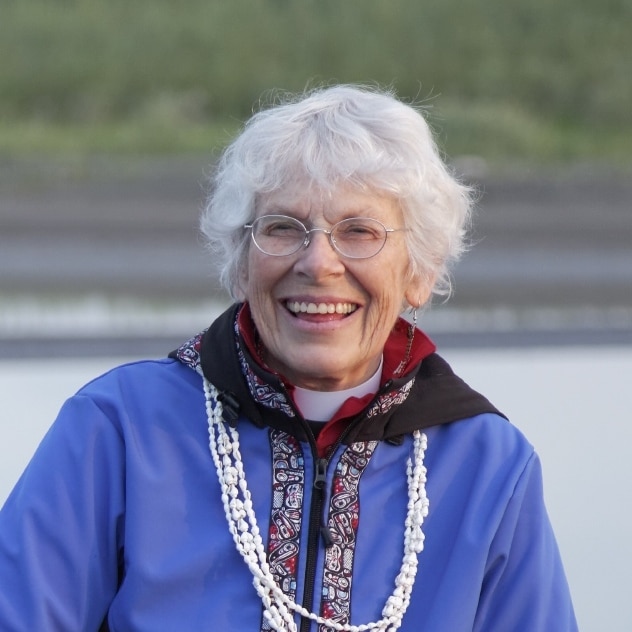 Far beyond the pulpit, this teacher-turned-Episcopal-priest helps young and old fiddle in harmony, building connections in rural communities.

On a perfect blue-sky day in May, in the fishing town of Cordova, Alaska, a small group of schoolchildren gathered outside Baja Taco, a popular food stand housed in an old red bus.
They didn’t join the locals eating halibut tacos at picnic tables. Instead, they set up music stands, readying fiddles and guitars, mandolins and ukuleles. Soon, they began to play “Shortnin’ Bread” and “Keep on the Sunny Side.” Leading them with a fiddle under her chin was Rev. Belle Mickelson, Cordova’s Episcopal priest and the founder of Dancing with the Spirit, which aims to connect children and elders through music.

The songs were simple and the melodies a little shaky, but decades of teaching bluegrass to hundreds of youngsters across Alaska have taught Mickelson, 67, not to underestimate the power of giving children the tools they need to play in harmony with adults.

“This is the wonderful part about this kind of music: Old and young can play together,” Mickelson said. “They start and stop together, enjoy each other’s company, and learn from each other.”

Mickelson started “Dancing with the Spirit” in 2006, but its seeds were planted decades earlier. In the 1990s, then-science teacher Mickelson visited the small Athabascan village of Galena on the Yukon River. Earlier still, Mickelson played violin as a child, and she learned old-time and bluegrass fiddle in her 20s, on a whim that changed her life.

Old-time music came down the Yukon with Hudson Bay fur traders more than 150 years ago. A century-and-a-half later, many Alaska Native elders on the river still play a unique Athabascan fiddling style. Square dancing, or “jigging,” is part of life in many villages. One night during a visit a quarter-century ago, Mickelson joined a few elders for a jam session and conversation over tea. That’s when she learned that the village of 500 was in shock and mourning over a rash of suicides among its young people.

On the bush plane that carried her home, her friends’ sadness weighed on Mickelson’s mind. There is no question Alaska’s rural communities see a disproportionate amount of heartbreak. Life there is culturally rich and deeply entwined with history and the natural world, but many people live in material poverty. Some still lack indoor plumbing. Substance abuse plagues these remote communities at a higher rate than in the general population. Alaska Native men between 15 and 34 take their own lives four times more often than any other group in America; on average, 225 young adult men end their lives for every 100,000 residents, with alcohol or drug abuse playing a frequent role.

“I thought, ‘What could I do?'” Mickelson said. “I didn’t know what I, as one person, could do.”
When she returned to Cordova, she kept thinking about music. Soon, she organized her first bluegrass music camp there, through the local 4-H.

Bringing the generations together was central to her vision. Mickelson enlisted older musicians to help and developed a system of colored dots to help children learn basic chords. Their musical fluency grew quickly along with their engagement.

In the early years of the Cordova music camps, she was teaching at an alternative high school. She noticed how playing music and writing songs–plus connections with caring adults–helped grieving students heal after another student’s suicide. Music had the power to heal. What would happen, she thought, if she could bring that engagement and powerful healing to Alaska’s villages?

Five years passed. Mickelson’s son, Mike, grew up from a camper to a counselor and formed a band called Bearfoot Bluegrass with his friends, which won the Telluride Bluegrass band contest in 2001, joining ranks with artists that include the Dixie Chicks. The group, later called Bearfoot, recorded five albums and has taught at more than 100 bluegrass camps.

As Mickelson watched her son mature from student to successful artist and teacher, she continued to dream of taking the camp model that inspired him out into rural Alaska. During this same time, she felt called to become a priest in the Episcopal Church.

While she studied for three years at seminary in Berkeley, California, she strategized on how to combine being a priest with bringing music to Alaskan villages.

“I picked my classes with that in mind and wrote papers and researched indigenous history and viewpoints,” Mickelson said. Still at seminary, she invited village-elder musicians to join a camp in Fairbanks. When it was over, she asked if they thought such a camp could work in a village setting. They said yes, it would. And so she began Dancing with the Spirit.

The spirit was willing but resources were thin. Even after Mickelson was ordained, she found herself short on money, awaiting word on grant funding for her pilot village music program. Worried, Mickelson decided to apply for seasonal work, counting fish in a remote wilderness site with Alaska’s Department of Fish and Game. But she knew, deep down, that the music program was the work for which she had trained and prepared.She had to do it. Three days later, the funding arrived.

“Any time I get discouraged, I think, God told me, ‘This is important. This is what you’re doing,'” she said. “I love this work because it’s not like preaching to people – it’s walking the walk and talking the talk.”

Camps usually last a week. Mickelson often travels with Trimble Gilbert, a Gwich’in elder, musician and Episcopal priest from Arctic Village. Having an elder along is essential, she said. “The elders are the ones that have survived,” she said. “The kids need to be reminded about how strong their people are.” And, she said, elders always know one more tune.

She also often brings her son Mike, who fishes out of Cordova in the summers. He remembers watching his mother in the villages. It isn’t easy to gain trust as an outsider, he said.

“Just being so positive and loving, she just doesn’t notice people who aren’t supportive. Eventually they find themselves going along, because they see what she’s doing,” he said.

At the end of the week, the students give a concert, inviting parents and elders into the school – or to the taco-stand. Sometimes elders join them and play.

“It gives these young people a way to interact with elders and learn their songs,” Mike said.

In the river town of Fort Yukon, school principal Debra Van Dyke said that students always look forward to visits from Mickelson. Her arrival in their small community is a big event.

Keeping kids in her 600-person village healthy is about keeping them involved, Van Dyke said. Mickelson’s program fits right in. Bringing Gilbert, whom the children know and respect, helps engage them. This summer, Mickelson left three fiddles behind in Fort Yukon, so three especially promising children can practice.

“She has such a gentle spirit about her,” Van Dyke said. “It just brings a peace and a calming into the school.”

Mickelson says she’s old enough to know that small things can change the course of a life. She started playing fiddle herself on a friend’s off-hand suggestion 50 years ago.

“I just think how many lives were changed and how many thousands of kids have gone to camps because of one guy saying to me, ‘you should play the fiddle.'” She dreams of bringing her program to every Alaska village.

“People are out there praying for you to come and help them, and when you answer that call, you will be blessed beyond anything you can ever imagine.”