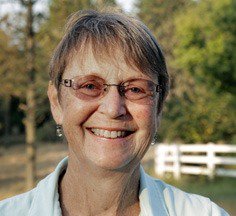 Hughes helps save people in the developing world from catastrophic injury by replacing the traditional open cooking fire with an efficient stove.

Nancy Sanford Hughes was at a loss after her husband’s death from cancer in 2001. During their 30-year marriage, she’d been mostly a stay-at-home mom, but one with a yen for travel and adventure.

When well-meaning friends suggested she sell her rambling home in Eugene, Ore., and take it easy, Hughes bucked their advice by volunteering for a medical mission to Guatemala.

Her late husband had been a family physician, but Hughes took the job she knew best: cooking. She’d spent years feeding a full house of family, foreign exchange students and friends of her three kids. “I was always good for a meal,” says the cheerful and vivacious Hughes, 68. “I always cooked for a mob.”

While she toiled in the makeshift kitchen in the highlands preparing meals for 120 members of the medical team, thousands of people came each day to see the doctors and surgeons. Perhaps 80 percent of the patients’ conditions stemmed from open fires in unventilated homes or from carrying heavy loads of wood to feed those fires.

Not until her third 10-day medical mission in 2004, did Hughes have the light-bulb moment that eventually led her to create StoveTeam International.

That’s when she met Irma, an 18-year-old indigenous woman who was a patient at the clinic. Irma’s hands had been burned shut at age 2 when she fell into the family cooking fire. Sixteen years later, a plastic surgeon at the clinic had literally opened her hands.

As Irma thanked the staff for giving her this “miracle,” Hughes decided she wanted to prevent, rather than treat, this kind of accident. She knew Irma was just one of the many who queued up daily for help at the clinic. What if she could shorten that line?

“It’s horrifying what you see. And then you leave, and there are 1,000 people still in line, waiting for hernia operations from carrying heavy loads of wood on their head,” says Hughes. “You just realize, you’ve got to do something different.”

That’s why in 2005, Hughes led a group of 15 people on long hikes to remote Guatemalan mountain villages, where they installed 125 heavy cement chimney stoves.

“Nancy was absolutely ideal for a fearless leader,” recalls Gail Norris, who worked triage for the medical mission and is now the volunteer coordinator for StoveTeam International. “She has the ability to look far, to be open to suggestions and open to the people around her and to make them do the best they can do.”

But after the arduous and dangerous work of installing the stoves, Hughes learned they’d barely made a dent in Guatemala’s need for an estimated 6 million stoves. Hughes became discouraged. For a year, she cast around for a new project – one where her contributions would truly make a difference.

Through complete serendipity, the designer of the stove Hughes and her team had installed lived in Oregon. Larry Winiarski, technical director of Aprovecho, a sustainable stove testing facility in Cottage Grove, knew her through her advocacy.

“He came and knocked at my door and said, ‘You can’t quit!’” Hughes recalls. “He said, ‘What you’re doing is really important.’” Hughes told Winiarski she needed a stove that was portable and had an internal chimney – so he developed one.

It was portable, smokeless, cool to the touch, and needed just three or four pieces of kindling to cook a meal. No longer would families need to breathe in heavy wood smoke and fine particulates, or worry about a child falling into an open fire.

What’s more, Winiarski was able to identify a businessman who lived in El Salvador, who thought he could produce the stoves with local labor and materials. The retail price for each stove would be about $50 – less than a third of the cost of the other stove.

Winiarski knew Hughes was the one to take the stove from design to reality. “She’d already proven that she could organize,” he recalls. “I thought, she’s probably the one who can run with this.”

Newly inspired, with a clear vision of what was now possible, Hughes was suddenly back in the stove business. “I said, ‘Okay, we’re going to go to El Salvador!’”
She, Norris and several friends from her local Rotary Club traveled to meet the businessman.

With some refinements from Hughes’ team, the design of the new Ecocina stove was finalized. It is a round shell made of a special cement, with a tile combustion chamber surrounded by pumice. A small shelf for fuel creates complete combustion in the main chamber, devoid of smoke. A metal pot support allows for cooking in a pot, but if there is no pot on the stove, a “plancha,” or griddle, can be placed there to cook tortillas and meat.

The new stove needs less than half of the wood a traditional open fire uses, and it produces 70 percent fewer emissions of carbon and particulate matter.

An unexpected windfall arrived in the mail soon after – a $10,000 check from musician Carlos Santana’s Milagro Foundation. Hughes used the money to finance stove production. In 2006, its first year of operation, the factory produced and sold more than 5,000 Ecocinas.

In 2008, Hughes launched StoveTeam International as an independent nonprofit. Using funds from individual donors, which are then tripled with matching grants from Rotary Clubs, the team has established additional factories in Guatemala, Nicaragua, Honduras and Mexico. More than 15,000 stoves have been produced and sold in Central America, reaching more than 90,000 people. Those factories have created 15 local jobs.

Fred Hamman of Managua, Nicaragua, who oversees the Leon factory, says every job counts in his country, where the unemployment rate stands at 30 percent. “Any employment is a good thing,” Hamman says. “Employing five people is a good thing for the community.”

Hamman and his wife, Beatriz Fiallos, have seen the beneficial effects of the little stove firsthand.

“One lady has begun to take the stove with her to make soup to sell as a business,” says Fiallos. “It’s helping her financially. She’s not spending too much buying firewood, and we can see the health effects on that family since the smoke is not in the house anymore.”

The need for the technology is global. Nearly 3 billion people worldwide cook over dirty, inefficient traditional cookstoves and open fires. The World Health Organization estimates that more than 2 million premature deaths annually are caused by exposure to smoke from those cooking methods, afflicting women and children the most. Household cooking fires constitute one of the top five overall health risks in poor, developing countries and cause twice as many deaths as malaria.

To that end, StoveTeam is helping to develop Ecocina factories in Mexico, Kenya, Fiji and Ghana.

Hughes continues to tirelessly promote the beneficial work of her team and to personally encourage board members, as well as the eager volunteers – there’s always a waiting list – who go to Central America with her each November to demonstrate the use of the Ecocina stoves to potential and new owners. Back home, her calendar is full of speaking engagements on behalf of the project.

“If anyone told me I’d be peddling stoves at this age – I wouldn’t have thought so,” says Hughes with a laugh. “But life just sort of happens.”