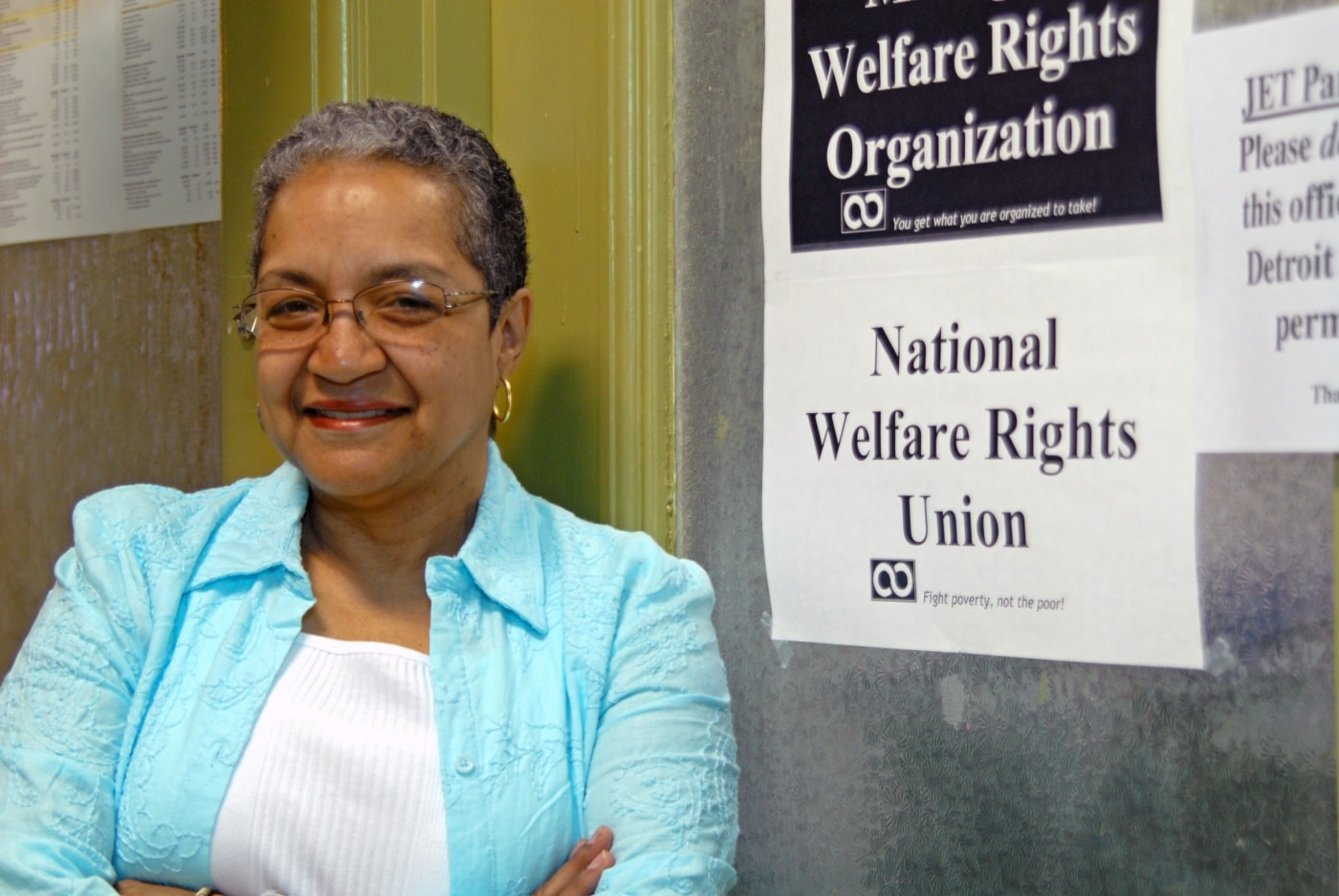 Organizing a grassroots, legal and legislative fight for the right to water in Detroit.

Five years ago, Marian Kramer – a long-time advocate for social justice and co-chair of the National Welfare Rights Union – discovered that the Detroit Water and Sewerage Department had shut off running water to more than 40,000 Detroit-area residents who had gotten behind on their bills, without giving these low-income citizens any help or even the opportunity to appeal. Kramer, who had been contemplating retirement at the time, decided to mobilize instead. She organized picket lines, pressed her case with the media, and petitioned those in power to make change.

Then she added key legal tactics to her arsenal. At Kramer’s urging, attorneys drafted a proposal to prohibit the widespread practice of shutting off running water to nonpaying Detroit residents without appeals, arguing that all customers have the right to due process. In addition, Kramer argued that the lack of running water creates the conditions for a potential public health crisis. Kramer’s advocacy led the Detroit City Council to adopt a Water Affordability Plan, now in its final stages of implementation. The multi-million dollar plan will help those who fall below federal poverty guidelines by subsidizing their water and sewer bills and assisting them in paying back what is owed.

Through the windows of the downtown Detroit office shared by the National Welfare Rights Union, the Michigan Welfare Rights Organization, and the Detroit Neighborhood and Family Initiative are the twin spectacles of Comerica Park – the stadium’s sleek stone tigers guarding the baseball fortress – and the colorful neon of the opulent Fox Theatre.

Like the other grassroots organizations with headquarters in the historic Central United Methodist Church, Marian Kramer and colleagues daily witness the stark demarcation of rich and poor in a city where the latter are mostly invisible. Kramer and her colleagues stand guard against official indifference – taking care of those in need, while irritating the powers-that-be with demands for justice and compassion.

As co-director of the National Welfare Rights Union, Kramer, 63, sees herself as an ordinary person with perhaps more courage to confront authority when fairness is at stake. That courage and her persistence are finally moving authorities from awareness to action on behalf of thousands of low-income Detroit residents.

In the late 1990s, Kramer discovered that the Detroit Water and Sewerage Department was shutting off running water to thousands of Detroit-area residents who had gotten behind on their bills, without giving those low-income citizens any help or even the opportunity to appeal.

When Kramer first heard about the water shutoffs, she had been advocating on behalf of residents without heat and electricity. Kramer and colleagues had taken on the big utilities, demanding that they give customers a chance to appeal their bills before cutting off their gas and electricity. They prevailed, convincing Detroit Edison to keep the heat on at least during Michigan’s bitter winter months.

The water department was another entity altogether – a taxpayer-subsidized utility that was supposed to be working in the people’s best interests. But Kramer had been hearing sporadic reports in her poor Detroit suburb of Highland Park that residents were living without running water because they couldn’t pay water bills. When a neighbor asked Kramer if she could run a garden hose from Kramer’s residence to her own, confiding that her water had been shut off months earlier, Kramer began asking around. Her counterparts in other social service organizations had heard many similar stories.

So Kramer and the folks at the Rights Union got busy doing what they do best: They confronted elected and appointed officials in Highland Park and Detroit, demanding documentation about the water shutoffs and a more equitable way for residents to challenge their rising bills. (The water department eventually produced a report showing that it had cut off water to 40,000 homes in 2001-2002. In Highland Park, which supplies its own water to residents, roughly half of all households, or 7,000, had been cut off at one point.)

Kramer co-founded the Highland Park Human Rights Coalition. She pressed the Highland Park City Council to address the exorbitant estimated water and sewage bills, and to stop the placing of delinquent water bills on property taxes. Town hall meetings called by the Union in the late 1990s at first attracted only a few dozen residents. Soon, a few hundred residents attended. Kramer says residents were initially hesitant to shout too much about their grievances, out of shame – and fear that the court would remove their children from the home because of the health hazard caused by a lack of running water.

The cause gained momentum. Kramer and her comrade-in-arms, MWRO Director Maureen Taylor decided on a legal approach to the problem. With help from Michigan Legal Services, they enlisted a national utilities expert to help advance a legal argument to support the right to running water.

The Water Affordability Plan was born. The plan would subsidize water and sewer bills for low-and fixed-income residents in Detroit using late fees and contributions from customers who opt to kick in an extra few bucks each billing period. Perhaps more important, the plan also would guarantee no shutoffs, a widespread practice of the Detroit Water and Sewerage Department.

Two years ago the Detroit City Council approved it. The Water and Sewerage Department’s Board of Directors agreed to implement it in July of 2006. But bureaucratic foot-dragging has delayed implementation so far.

“We’re hoping and praying and still pushing,” says Kramer, who notes that the department cut off the water in 4,000 Detroit homes in May 2007. “We have July 1 as a goal, and we’re not giving up.”

Lorray Brown, managing attorney with the Michigan Poverty Law Program, says Kramer has organized the support needed for the Accountability Plan’s passage and implementation. “Each time we’ve been faced with a stumbling block, [Kramer and the Rights Union] have been able to mobilize roomfuls of people,” Brown says.

One of those protest voices, Tapeka Dixon, says Kramer helped her not only when the gas company shut off her heat in 2004, by putting her on a budget plan and finding money to cover the bill, but also when the water department shut off her water for nonpayment of a $1,000 bill. Dixon had told the department that the fees applied to the previous homeowner; she didn’t get anywhere. But when Kramer contacted the water department, they listened; department officials met with Dixon and reduced her bill by $600.

As an African-American growing up in the South, Kramer marched for civil rights and organized voter registration drives, landing in a Louisiana jail once for eight excruciatingly muggy and insect-plagued nights.

After Kramer’s mother divorced her father, Marian’s grandparents stepped in to help raise her while her mother worked two jobs and volunteered for civil rights organizations that were forming in the South. She also opened their home to people who needed a meal.

“She made us promise we would always try to help one another,” Kramer recalls. “My family was always sharing.”

Her strategies for being heard today range from street-level picketing and sloganeering to letter-writing campaigns and phone calls to formulating sophisticated proposals to redress wrongs. Kramer is known for her ability to quickly organize people to show up at the Mayor’s office or a City Council meeting to challenge a vote.

Kramer calls the Union’s success with the water affordability plan a watershed event in her career as a grassroots activist. She says it’s also opened her eyes to different water-related challenges. Kramer recently accompanied the Detroit chapter of the Sierra Club to a Great Lakes conference in Washington, D.C., where she spoke about the Union’s successes and strategies, and where she learned about the pollution of Great Lakes waterways and widespread industrial dumping in the Detroit River.

As for where she’ll go with a newfound knowledge, she’s not sure yet. But the broader water issues are on her radar.

“The question of just having water turned on goes beyond that to quality of water. We’re looking at environmental justice. Yes, we represent poor people, but this goes beyond poor people. I could be a senior – plant flowers every day – but there’s too much to be done.”