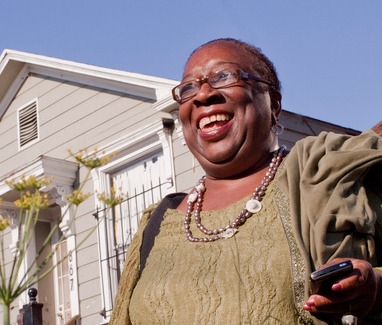 Gordon connected asthma plaguing her community to pollution from the nearby port and improved the area’s environmental health.

Children living near the freeways in urban Oakland, Calif., are hospitalized for asthma at 12 times the rate of youths in the city’s more affluent – and greener – suburb of Lafayette.

Years ago, Margaret Gordon didn’t know about how grave the situation was in her Oakland neighborhood. All she knew was that she was sick. So were three of her grandchildren and one of her sons.

Over time, she began to make the connection between the industrial nature of her surroundings – living next to the massive Port of Oakland – and the asthma that afflicted her and her family.

In 1992 she moved to West Oakland, where toxic fumes from ever-present diesel trucks and from a factory just blocks from her family home motivated her to get involved. In a big way. Since then, Gordon has gone from housekeeper to activist to mayor-appointed commissioner of the country’s fourth busiest container port.

Once an unseen, unheard resident of a poor, black neighborhood in the San Francisco Bay Area, Gordon has become a visible insider, someone who wields influence in the quest to improve the area’s environmental health and, ultimately, the health of its residents.

“I was cleaning Michael Herz’s house,” she recalls. Herz is the founder of Baykeeper, a nonprofit watchdog group that monitors water quality in the Bay Area. “I was straightening up his books and magazines, and I started to flip through them. They were all about the birds, the water – and how much what was going on with the port affected the health of the area.”

Gordon began to make the connection between her own health and the port. She’d always had asthma but had noticed her attacks became much worse after she’d settled in West Oakland. She read about the condition’s causes and, after speaking with people who’d been hospitalized for severe asthma, soon realized that the problem was widespread.

Around the same time, a local freeway was being redirected from its original site closer to Gordon’s home. Workers relocating a utility line during construction were overcome by carcinogenic vinyl chloride in the soil – a byproduct of industry in the area. That was enough for Gordon. “I needed to get involved and improve those conditions,” she says.

Knowing little about environmental issues, Gordon joined her neighbors and worked to stop the rebuilding through a series of community meetings with the California Department of Toxic Substances and Control and the California Department of Transportation, which was overseeing the freeway project. Though that portion of the freeway was still rebuilt, pressure from the residents played a part in making the area a U.S. Environmental Protection Agency Superfund site. (In Superfund communities, residents are included in developing clean-up plans and receive job training to engage in the clean up.)

That taste of community organizing changed Gordon’s life. Her community involvement led her to the West Oakland Environmental Indicators Project, then a part of the Pacific Institute, a Bay Area think tank. She continued to educate herself on environmental issues and found that she had a knack for analyzing data. “I look at the bigger picture of how these things have happened and the root causes and how to do the analysis,” says Gordon. “How do you take these very emotional things and get into the weeds and analyze the data?”

Eventually the project became its own nonprofit, and Gordon became its co-director. During her involvement, the project has conducted half a dozen studies, exploring air quality; truck and shipping traffic at the Port of Oakland; and the rail and truck terminals that service trucks and trains. The group’s first research report showed that diesel emissions in West Oakland were five times higher than in the rest of the city and that children who lived in the neighborhood were seven times more likely to be hospitalized for asthma than children elsewhere in Oakland.

So Gordon spearheaded an effort to reroute diesel trucks so they would circumvent the neighborhood’s residential areas. The residents won. “People realized, ‘I can do this,’” Gordon says. “They just needed to learn how.”

With Gordon’s guidance, and with support from residents, the West Oakland Environmental Indicators Project also:

The port, which sits next to West Oakland, has been a focus of Gordon’s work for years. Port activities bring considerable pollution to the area. According to a 2008 state report, the emissions associated with the port, a rail yard and other sources of diesel exhaust plague West Oakland, exposing the community to elevated potential cancer risks.

Gordon believes that due in part to her organization’s research and education campaigns and her influence as a commissioner, the port is becoming greener. She says it’s slowly, steadily changing its operations, such as electrifying all the docks by 2014 and requiring trucks to either be new or retrofitted with filters to reduce pollution. There’s even an educational center for truckers to teach them how to be more mindful of idling, which contributes to toxic emissions.

Gordon “has always been a fearless, vocal and tireless advocate for the people, especially those who are most disenfranchised,” says Diann Castleberry, director of social responsibility and acting director of administration at the Port of Oakland.