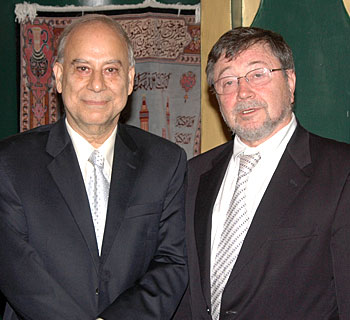 Fighting intolerance, conflict and terrorism through dialogue and exchange.

UCLA computer science professor Judea Pearl (right) has left math equations behind to defy the terrorists who murdered his son, Wall Street Journal reporter Daniel Pearl, in 2002. “If they try to spread division among people, then we ought to spread friendship,” he says. Akbar Ahmed (left), a professor of Islamic Studies, is Pearl’s partner and envoy to Muslims in the U.S. and abroad. The two now travel the country to speak at “Daniel Pearl Dialogues for Muslim-Jewish Understanding Featuring Akbar Ahmed and Judea Pearl,” linking their life stories to a larger call for reconciliation and providing a rare forum for moderate Muslims in the U.S. to gather.

Dialogue is central to all the work of the Daniel Pearl Foundation, which sponsors fellowships for journalists and an Internet news service for high school journalists, advocates press freedom, and organizes world music days to bring people together. One small example of progress: Ahmed will speak at the U.S. Holocaust Museum in Washington, the first Muslim to be invited.

UCLA computer science professor Judea Pearl would be working on math equations if it weren’t for the opportunity to defy the terrorists who murdered his son, Wall Street Journal reporter Daniel Pearl.

Pearl and his wife, Ruth, set up the Daniel Pearl Foundation a week after their son’s death was confirmed in 2002. An engineer, Pearl has created a chart showing the groups he determined could be moved to dialogue and reconciliation by the symbol of “Danny.” He has strategies for reaching Muslims, Jews, Americans, journalists, and musicians and says he is “compelled” to exhaust the opportunities to do so.

“This is my conception of revenge,” he says. “If they try to spread division among people, then we ought to spread friendship.”

Akbar Ahmed, a professor of Islamic studies at American University and a social scientist, says he is just as driven by results. A former Pakistani government official and ambassador to Great Britain, Ahmed has become Pearl’s partner and envoy to Muslims in the U.S. and abroad. “I am seeing cause and effect,” Ahmed says. “We got them by the scruff of their necks and pushed them toward dialogue.”

When Pearl, 69 years old, and Ahmed, 63, began appearing together around the country, sitting on couches discussing Islam and modernity and Israel and Palestine, Ahmed joked that the world must really be in bad shape if it was up to two grandfathers to bring the polarized sides together. Now they make a virtue of their age and experience, setting themselves outside politics, focusing on long-term solutions and the world their grandchildren will inherit.

From Silence to Dialogue

Ahmed grew up in Karachi where Danny’s murder took place. On the night the killing was confirmed, Ahmed called for a moment of prayer at a book reading. Some in the audience asked why he cared so much about a non-Muslim. “This is really a great crisis for us in human society,” Ahmed said he told them. “I weep for Danny Pearl, and I weep for Pakistan.”

A few months after the tragedy, Pearl called Ahmed, and they spoke of what could be accomplished together.

Since then, the on-stage “Daniel Pearl Dialogues for Muslim-Jewish Understanding featuring Akbar Ahmed and Judea Pearl ” have attracted large audiences at universities where Muslim-Jewish relations have been tense such as Duke University, UC Irvine, and in cities such as Toronto and Chicago. About one-third of the audiences have been Muslim, about one-half Jewish.

The events, about a dozen so far, have provided a rare forum for moderate Muslims in the U.S. to gather. Pakistani and Israeli diplomats have used the events to meet informally. Such openings, according to Ahmed, played an indirect role in Pakistani President Pervez Musharraf’s decision to address an assembly of American Jewish organizations in New York last year, the first such appearance by a leader of a Muslim country.

The dialogues have caused ripples of change around the U.S. and abroad. Ahmed is scheduled to speak at the U.S. Holocaust Museum in Washington, D.C., the first Muslim to be invited. The College of William and Mary has established a dialogue program based on the foundation’s model. Reports of the dialogues have given newspapers in Riyadh, Bangladesh, Beirut and Pakistan a chance to highlight dialogue over conflict. A magazine supplement commemorating Danny Pearl recently was published in Pakistan.

Pearl says such tangible progress sets the dialogues apart from the polite but often ineffective cultural exchanges – what he calls “pita and baklava” events – that generally avoid divisive topics. Mention of the Israeli-Palestinian conflict, for example, can ruin the whole evening. “The baklava will be left uneaten,” he jokes.

In contrast, the Pearl-Ahmed dialogues don’t shy from the clash of myths held dear by both sides. At a dialogue in Irvine, California, last year, the discussion ranged from reports of the desecration of the Koran by American troops, to Israel’s raid on Palestinian militants, to the Abrahamic roots of Islam, Judaism, and Christianity.

“At the end of his life, Abraham was able to bring his sons together and effect the reconciliation,” Ahmed says. “That’s a happy sign that the Jews and the Muslims can come together.”

The dialogues also give Pearl and Ahmed a chance to link their life stories to a larger call for reconciliation. Ahmed was four when India was partitioned. East and west Pakistan, now Bangladesh, were carved out. Hindu extremists bombed the train Ahmed’s family had planned to take. Save for a change in plans, “we would have been wiped out,” he says.

Pearl was born in Tel Aviv in 1936 and remembers the 1948 war that established Israel’s statehood. “I played with Palestinian kids. We rode donkeys together. One day they disappeared and we asked, ‘Why?'” he says. “We grew up with the best of intentions. Things went wrong, went sour – we can repair them. That’s our message.”

The Power of Words

Dialogue is central to all the Foundation’s work, including fellowships for international journalists to work in U.S. newsrooms as well as media training and an Internet news service for high school journalists in the U.S. and abroad. Danny’s status as a reporter has made him an icon for other journalists advocating for such causes as press freedom, openness, and storytelling. Among those who are helping the Daniel Pearl Foundation are Ted Koppel, Tom Friedman, Christiane Amanpour, and Paul Steiger.

Pearl and his wife edited a book based on Danny Pearl’s last words, I Am Jewish, with essays from about 150 people, including U.S. Supreme Court Judge Ruth Bader Ginsburg and Sen. Joseph Lieberman. The book is being used to spark discussion in dozens of synagogues and community centers.

And then there is the music. Danny’s talent as a fiddler and mandolin player inspired the Pearls to organize the annual “Danny Pearl World Music Days,” with participation from Yitzhak Perlman, R.E.M., Yo-Yo Ma, a leading Iranian pop singer, and Pakistan’s top rock group, Janoon. Elton John dedicates a week of concerts each year to the Music Days and sings “Daniel” at his concerts.

The concerts “create a sense of empowerment: that we are not alone, that we’re part of a global scheme,” Pearl says. “That defies terrorists and fanatics and protects civilized society.”

The two men have learned from each other even as they teach others. Pearl has become a dogged student of Islam, pursuing with a scientist’s zeal the religion’s motors and mechanisms. He has come to understand how Osama Bin Laden appeals to Muslims, by personifying their frustration in the form of the United States, giving them “a culprit, which they need to explain their failing society.” Sometimes he makes Ahmed nervous, as when he promotes the use of “fatwa” (a formal legal opinion or religious decree issued by an Islamic leader) as a tool to stop extremism and “propagate modernity.”

Of the two, it is Ahmed who faces the greater risk of attack. Three years ago, a headline in the Daily Times, Pakistan’s main newspaper named Ahmed “the sole Muslim voice in dialogue with the Jews,” an incitement to violence against him. In Jordan, he was asked, “Why are you so concerned about the death of one Jewish boy when Americans are killing so many Muslims every day?” But this year, in a tour of nine Muslim countries, he said the reaction was more often “What you are doing is great,” rather than, “Why are you talking to the Jews?”

The pair is booked for more than a year in advance, and can’t honor all the invitations they receive. They are seeking to train other speakers and broaden the dialogues beyond themselves, though Pearl acknowledges his personal connection to Danny may be crucial to their success so far. He wants dialogues in every country, every city.

In conversation, Pearl laughs so readily and heartily that it’s easy to forget that his son was beheaded by terrorists. But he says he isn’t pursuing reconciliation to make himself feel better – nothing can.

“I’m not doing this for therapy,” he says. “We have a unique opportunity and we have to do everything that opportunity allows. Once you tell me that I’m having no impact, I’ll go back to my equations. I’m doing this only for the sake of the end goals.”