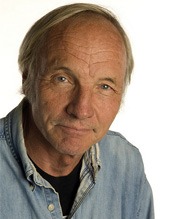 Jock built the world’s first peanut sheller and moved on to an encore developing sustainable technology for developing countries.

On a trip to West Africa to help a friend fix a solar-powered drinking water system, Joost (Jock) Brandis came across an even bigger need: a simple, cost-effective peanut sheller to help poor women prepare tough ground nuts for sale. It seemed simple, and Brandis promised to find one back in the U.S. What he didn’t know was that this “holy grail of sustainable agriculture” didn’t exist.

A film lighting director by trade and a handy guy himself, Brandis decided to invent one. His Universal Nut Sheller, built for $28, is now revolutionizing vital cash crops in developing countries by cutting down on labor hours and keeping more money with farmers, who no longer have to take crops miles away to be shelled by an outside source. Village incomes are up 20 percent, according to some studies.

Brandis’s organization, The Full Belly Project, has placed machines in 17 countries, created similar machines for other nuts and trains aspiring social entrepreneurs to locally manufacture and distribute the machines.

It’s not difficult to shell a few peanuts by hand, even the small, hard-shelled “ground nut” variety that is the primary protein source for more than half a billion people in 100 countries. But shelling enough for many family meals is a real chore, and shelling tons of peanuts for income is painful, even crippling work that requires enormous amounts of time.

In 2001, on a visit with a friend in the Peace Corps, Brandis met women in Mali who were about to give up on peanuts even though they realized the nuts were good for income and the plants helped replenish nitrogen in soil exhausted from traditional cotton crops. Brandis, a lighting director for films and mechanical whiz, suggested they use a machine. There isn’t one, they replied. Convinced they were wrong, Brandis promised a solution by next harvest.

But the women were right. For hundreds of years, Brandis learned, farmers of peanuts, pistachios, coffee beans and other small hard edibles have longed for a reliable shelling machine that can take in piles of raw material at one end and spit out shelled, whole, uncrushed product at the other. It has been “the Holy Grail of sustainable agriculture,” he says. But every attempt to invent one had failed.

No stranger to mechanical challenges, Brandis determined to do it himself. During 30 years in the film industry, he had often used whatever was handy to tackle instant needs, like making a bed for a horror-movie carnivore out of air mattresses, food coloring and Mr. Bubble bath foam. “The movie business really hones your problem-solving skills,” he says.

Brandis returned home to tinker with the problem in his Wilmington, North Carolina, garage. A friend suggested cement as a key material, because it’s available everywhere. Bulgarian design contributed some elements. In a key insight, Brandis turned one primary cone-shaped part upside down. A few months later he flew back to Mali with a simple machine. He called it the Universal Nut Sheller. It was an instant success.

“Jock invented an entirely new type of groundnut sheller – new shape, new material, new method of manufacture,” explains Allen Armstrong, professor of engineering at the Massachusetts Institute of Technology. It cost $28 and used materials available easily in Mali and many other countries.

But it wasn’t so easy to find a niche for the sheller in the complex and politicized universe of international development work.

Conventional wisdom holds that farm products should be shipped to central locations for more efficient milling and grinding or shelling and pressing into oils and animal feed. “It has to be this way, I was told, because food processing needs reliable electricity to run the big machines and big machines need high product-volume,” Brandis says. “Unfortunately, that is where the real ‘value added’ happens. The farmer stays poor.”

In 2003, Brandis and some former Peace Corps volunteers formed the nonprofit Full Belly Project to challenge that conventional wisdom. They adapted the sheller for use with coffee beans, macadamia nuts, shea nuts and jatropha, a seed that can be processed into diesel fuel, fertilizer and natural insecticide. They made pedal- and electric-powered versions for higher yields.

Partnering primarily with non-governmental organizations, Full Belly has today placed machines in 17 countries and gets 10 times as many requests for machines as it can provide. It’s no wonder: Nourish International’s chapter at the University of North Carolina in Chapel Hill found that in 20 villages in southeast Uganda where peanuts were the only cash crop, village income rose 20 percent after the sheller was introduced.

And there were other benefits as well. A Peace Corps volunteer, Tim Pope, found that women in a village in West Africa were spending six hours a day fetching poor-quality water from a distant site, and that cholera was rampant as a result. The women spent so much time carrying water and caring for the sick they did little to generate income. The solution was to drill a well nearby, but the village needed to raise about $5,000. Pope got a Peace Corps sheller and helped the villagers set up a co-op system to bring in peanuts from surrounding areas. They shelled 30 tons of peanuts in two months. They drilled the well, cholera disappeared, and village women are now in the shelling business. “They are the entrepreneurs, we are the facilitators, and we never had to buy a single plane ticket to set up the project,” Brandis says.

Brandis now envisions a development model that has entrepreneurs and organizations in each country manufacturing his machines from local materials and distributing them to area villages. Some groups have proposed partnerships – in food processing, especially as it relates to women’s economic opportunities; in biofuels operated at the village co-op level; and in restoring environmental damage, such as recycling waste and rescuing depleted soils.

“The idea of what he created is radical,” says Jeff Rose, Full Belly’s executive director, who began as a volunteer cutting metal and pouring concrete. “I think we can change the way that international development work is done.”

Full Belly has recruited a high-powered board to direct its fundraising and outreach efforts and to help document the benefits of its work. These efforts are bearing fruit, but the process is too slow to suit Brandis, who is now 63. “I’m in a hurry,” he says. “If I was doing this when I was 35, I would have had all the time in the world to get it done. I want to do water and wind and solar, and I’m not going to be able to do them all. I want to cram in as much as possible.”

And inspire others to do the same. Ming Leong, an MIT engineering student and summer Full Belly intern, says he now plans to follow Brandis into creating sustainable development technology for developing countries: “Just being around Jock has made me feel like, yeah, I have a chance to make a difference too.”