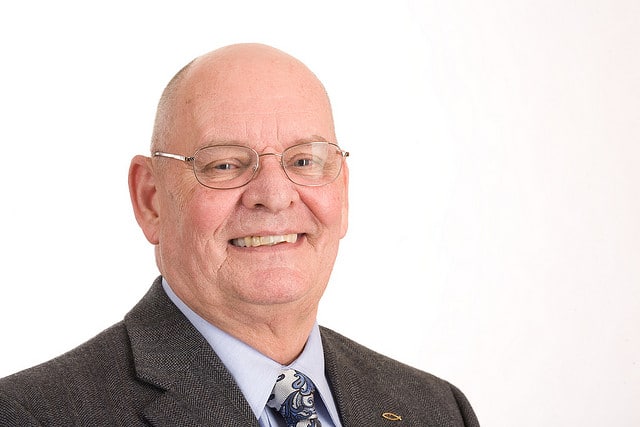 Providing a new model of housing and recovery for homeless alcoholics and addicts.

Jay Davidson was a high-functioning alcoholic with a 20-year career in the military until the day when his commanding officer told him to conquer his addiction – or else. Finding stability, community and spirituality in a 12-Step program, Davidson eventually retired from the Army with high decorations, returned to school to earn a masters degree in social work, and turned his life around. At the Healing Place, a homeless shelter where Davidson talked and lived with clients, he saw firsthand how most people couldn’t break the cycle of homelessness without first breaking their addictions. He created a unique residential treatment program offering men and women a place to live and recover. Participants live together for nine months and go to AA meetings together, and alumni stay and work as peer mentors. Seventeen years since its inception, the program has had 2,400 graduates, is replicated in other states, and has garnered worldwide attention for a recovery rate that is five times the national average.

At just the time that Jay Davidson was hired in 1991 to direct a small homeless shelter in Louisville, Kentucky, two key staffers left. It was 1991 and Davidson had to run the place himself. He spent a lot of time talking with the people who came to the shelter for service and getting to know them. Many said they had come in off the street for a while, gotten an apartment, food stamps, even a job – but had wound up right back where they started.

“They told me they’d get lonely, depressed or feeling guilty and they’d start drinking and drugging again to numb the pain,” he says.

That was when Davidson, a recovering alcoholic himself, realized that the real root of the problem was addiction. Studies confirm it: 80 percent of homeless people suffer from addiction to alcohol, drugs or both. Trying case management and therapy before the clients had stopped using was “putting the cart before the horse,” Davidson says.

So in 1992, at age 50 and retired from the military, Davidson created The Healing Place, a unique model for residential treatment programs. It is a combination “wet and dry shelter” – a homeless shelter and a recovery program. It offers men and women a place to live as they work their way through a nine-month recovery based on the 12 steps and traditions of Alcoholics Anonymous and the Recovery Dynamics curriculum.

Peer mentors deliver classes and one-on-one coaching. Community meetings three times a week address issues of personal accountability, struggles with recovery, and specific behaviors, with consequences determined by the community. Attendance is mandatory at Alcoholics Anonymous / Narcotics Anonymous meetings. Leadership development is reinforced by the regular election of participants to supervisory positions such as kitchen, maintenance, and housekeeping.

It is a social model, not a medical model, Davidson says, and its strength comes from the participants. They live together, go to AA meetings together and form a family with the mission of helping each other heal. Alumni stay on and work as peer mentors, becoming powerful role models and inspirations.

After 16 years, the program has 2,300 graduates, and its success has garnered worldwide attention. Its 65 percent recovery rate is five times the national average. It costs $25 a day per person, compared with $250 for most other treatment programs.

In 2005, the state government chose The Healing Place as the model for “Recovery Kentucky” and is replicating it in 10 new centers. Raleigh, N.C., and Richmond, Va., have their own versions. The U.S. Department of Health and Human Services has recognized it as a model that works. Dr. Burns Brady, a nationally-known expert in addiction medicine, calls The Healing Place “the best recovery program in the world.”

Rodney Kidd, 39, was one of hundreds of people who thronged The Healing Place on a recent Saturday to celebrate the shelter’s annual alumni reunion with barbecue, games and a talent show. When he arrived three years ago, he said, he had nowhere else to go. His mother had kicked him out, and he had used his final paycheck to buy six nights in a hotel room with the plan of drinking himself to death. He nearly succeeded.

Now he’s on his own, living a sober life. “The support here, it saved me,” he says nodding at the people around him, recovering addicts all.

John Pierce, a mentor who became sober in 2005, was one of them. He pointed to a man with a plate of barbecue, cutting up with friends. “When he first came in here, he had his head down. He told me ‘I hate this place.’ I said, ‘Listen to what this place had done for me.'”

Pierce told him that after his wife died of cancer, he sank into a darkness of drinking and drugging that nearly killed him. At The Healing Place, he learned to grieve sober. “He looked at me and said, ‘Well, if you can do it, I guess I can, too,'” Pierce says. “See, that’s the secret. You can’t keep it to yourself. Once you get this place, you just want to give it.”

Jim Lancaster is a former alcoholic who wouldn’t eat or sleep because it sobered him up. “When I got here, I didn’t care about me, much less another human being,” he says. “Now I can care about another person.”

Davidson, now 66, talks about his recovery, too, beginning with a childhood memory of his drunk father cutting up his mother’s dresses, then pushing her out a one-story window. His father left the family, and Davidson didn’t see him again for 27 years, until he was dying of advanced alcoholism. “I had a genetic predisposition. I was doomed from the start,” Davidson says.

Davidson grew up in Denver and was 14 when he started drinking, but he still made good grades and became a leader in his high school’s ROTC program. It foreshadowed what he would become: a highly functioning alcoholic – a successful, rank-climbing Army officer by day, a drunk by night.

In his mid-30s, Davidson was assigned one summer to supervise an ROTC camp. He started work at 6 a.m., leading cadets through a five-mile run with a belly full of beer from the night before. He stumbled, slurred and smelled. People noticed. His superior officer, Ike Smith, warned him: “Get clean, or you’ll be discharged without honors.”

“He saved my life,” Davidson says. “He cared enough to do the tough thing.” Davidson’s addiction had already led to a divorce from his first wife, and this was his final wake-up call. He entered Alcoholics Anonymous at Fort Knox, Kentucky, with soldiers ranked below him. “I had to humble myself,” he says. “I became just one of the guys all trying to get sober.”

Davidson dried out and was promoted to lieutenant colonel. He retired highly decorated in 1986. Soon, however, he was restless. “I wanted to find myself because I wasn’t fulfilled,” he says. “In retirement, I was looking to do something to make a difference, and I didn’t know what.”

In 1988 Davidson took a job in Saudi Arabia as an adviser to the Royal Saudi Air Defense Force. Practicing Christianity was against the law there, so Davidson joined other families in worshiping secretly. He also visited the Holy Lands.

“I was convinced I needed to get back involved with people,” he says. He enrolled in University of Louisville’s graduate school for social work with the intention of becoming a psychotherapist, practicing from a Christian perspective. “But God had other plans for me.”

With Davidson’s help, Kidd, Pierce and Lancaster all lead sober lives now, with jobs and places to live. They’ve made amends with friends and family they hurt and disappointed. All say the program gave them the support they needed to get straight and the tools they needed to build a life. They all give Davidson the credit.

“I do know it begins with Jay. But he’s the type of person it doesn’t end with,” says Lancaster. “He’s done so much for so many; it’ll just continue on.”