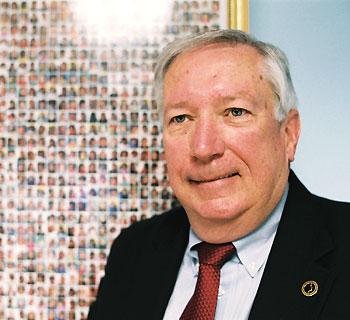 A serious heart condition forced Frank Brady, a jet-setting international businessman, to retire. Recalling an earlier health crisis – he survived spinal meningitis as an infant thanks to experimental treatment with a new miracle drug called penicillin – Brady created Medical Missions for Children in 1999. The organization helps seriously ill children who lack access to quality medical care, and educates the medical professionals who care for them. Medical Missions for Children uses interactive video technology to allow pediatric specialists to remotely diagnose patients and recommend treatment, and internet and broadcast technology to collect and distribute cutting-edge information to thousands of medical professionals across the country.

“I started to think about how I was a sick child,” he recalls, and then tells the story as his mother countless times had told it to him. It was 1943 in Kearny, New Jersey. Brady was only a year old when he was diagnosed spinal meningitis. Doctors told his parents that there was little hope the baby would survive, also said that researchers were working on a new drug that might provide Brady his only chance. Months earlier, it had been given to a critically ill adult patient in Connecticut and she had survived.

Doctors urged Brady’s parents to try the drug. Considering the baby’s critical condition, they said sadly, there was “nothing to lose.” The Bradys agreed to the experimental treatment, and their son took a new drug called penicillin.

Ever since, Brady recalls, his mother told him that his survival was a gift, one that made him special, one that required big things from him as a result.

As his heart mended, Brady began to put the pieces together. “I started to think that maybe I could somehow help parents and their children, help families who had their backs against the wall because they were going to lose a child.”

Zeroing in on a Strategy

“I had personally witnessed the shortcomings of the health care system in underserved and impoverished communities – in the United States and across the world,” Brady continues, “and I came to realize that there is a need to transfer medical knowledge from those who have it to those who need it.”

Brady chose to leverage two critical resources – communications technology and the expertise of pediatric specialists practicing medicine at the nation’s top medical institutions – to try to improve the quality of children’s health care. In 1999, with an initial investment of $84,950 for a crucial piece of equipment and key partnerships with Intelsat, Polycom, and the St. Joseph’s Children’s Hospital in Paterson, New Jersey, Medical Missions for Children (MMC) was born.

In the eight years since then, Medical Missions for Children has built a reputation for educating medical professionals and saving the lives of children with cancer, chronic conditions, and catastrophic illnesses – both in the United States and around the world. Through partnerships and aggressive fundraising, the project has built state-of-the art facilities located at St. Joseph’s, a $12 million annual budget, and a staff of 18.

Paterson is one of nation’s poorest communities. Nearly 90 percent of the households with children under 18 are headed by single mothers, and more than half of all the city’s resident families survive on an annual income of less than $14,800. Many of the children of these families don’t get appropriate medical care. Brady decided to start his work at home, hoping to prove the value of Medical Missions for Children’s “telemedicine” technology.

Put simply, telemedicine allows pediatric specialists to remotely examine, diagnose, and suggest treatments for critically ill children. Over the past 12 months alone, doctors at St. Joseph’s have conducted more than 475 telemedicine consultations for patients in the greater Paterson area. In addition, pediatric oncologists at St. Jude’s Children’s Research Hospital in Memphis use telemedicine to consult with doctors who are treating children with cancer in and around Paterson.

To date, the greatest use of telemedicine has been international – Medical Missions for Children has helped close to 25,000 children in 36 countries. State laws governing where doctors are licensed to practice have prevented its spread in the United States.

As important as telemedicine is, it’s just one aspect of the work that Brady and his team have been doing. In addition, Medical Missions for Children has:
Created the Global Video Library of Medicine to provide access to the most current medical knowledge being disseminated by Medical Missions for Children’s network of hospitals, the National Institutes for Health, the Centers for Disease Control and Prevention, and 108 content partners. The library provides physicians and allied health workers free unlimited access to video-based medical educational material. Brady says it is rapidly becoming the largest such collection in the world.

Launched the Medical Broadcasting Channel to broadcast live and pre-recorded video medical education to the U.S. and global medical community. With an FCC-licensed satellite broadcast facility, Brady and his team can now transmit new content and programs from the library via broadcast satellite and Internet2. At St. Joseph’s, Medical Missions for Children has installed an “Intranet” that permits the transmission of Medical Broadcasting Channel content to the desktop of every health care and hospital administration professional throughout the 12-site network.

Developed a video-based education series to help educate health professionals on ways to reduce infant mortality among African Americans in the United States. This project is a cooperative venture with the Maternal/Child Health Consortium in New Jersey.

Established Giggles Children’s Theater to cheer up sick children stuck in hospital wards for long periods of time. The innovation: theater performances are live and broadcast on in-house hospital channels for children stuck in their beds. These programs are broadcast and can be used by in-house hospital channels everywhere. In addition, Medical Missions for Children is working with GE Healthcare to create educational health videos for schools in the greater Milwaukee area with predominantly Hispanic students.

Today Medical Missions for Children hopes to get federal funding to put a telecommunications satellite receiver on every one of the 6,600 hospitals in the United States. Once in place, the programs and protocols developed at their production facilities in Paterson would be available nationwide.

“Because of the current rate of medical breakthroughs, the amount of medical information available to the public will essentially double over the next five years,” Brady says. Medical Missions for Children is peddling fast – with ever-changing communications technology – to keep up.

Now 64, Brady says it’s an “unbelievable high” to alter or save the life of a sick child. “I don’t know why anyone would want to do anything else.” In fact, his new life is so satisfying, Brady adds, that “my wife and I sometimes feel a little bit guilty because we’re afraid we’re getting more out of this than the people we’re helping.” It’s not surprising that Brady, given his own brushes with mortality, is a bit consumed by legacy. “I realize that when I die my obituary will have perhaps two paragraphs on what I did most of my life, the rest will be about what Medical Missions for Children accomplished and how we made a difference”, he says. “I think about that, and I’m very proud of it.”