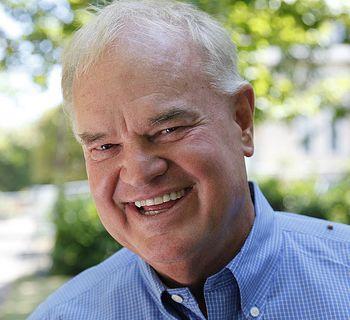 Founder and Chairman
Friends of the Children
Purpose Prize Winner 2009

Campbell created and runs Friends of the Children to provide at-risk kids a caring adult in their lives from age 5 or 6 until they approach adulthood themselves.

One night when Duncan Campbell was 3, he went looking for his parents. Police found the couple at a bar. Through boyhood and adolescence, Campbell felt he was raising himself. Somehow, he fought against his disadvantages and eventually established a successful investment firm. Now, he’s investing in children. His national organization looks for kids “who have accumulated the most heartache and trouble,” promising them a caring adult in their lives from age 5 or 6 until they approach adulthood themselves. The mentors are paid professionals, not volunteers, helping to ensure quality, consistency, and commitment.

Duncan Campbell vividly remembers getting picked up by the police at age 3 in the middle of the night while he searched for his parents. The cops found his mom and dad in a bar.

“The worst was when I was eight and my dad finally showed up drunk and too late to swear me into Cub Scouts,” recalls Campbell, now 64. “My parents never helped me with homework, never came to any games. I can’t remember one thing we ever did together. I was always alone.”

Long ago, Campbell promised himself that if he ever became wealthy, he would use his money to throw a lifeline to impoverished, abused, neglected, and otherwise hopeless kids. In 1993, he turned over the day-to-day management of the company he founded and created Friends of the Children, an organization that matches committed mentors with kids.

Start early. Kids get paired with mentors, or “Friends,” at age 5 or 6.
Stay for the long term. The mentor-child relationships last from kindergarten or first grade through high school.

Friends are trained professionals who spend at least four hours a week with each of about eight children. They receive salaries, benefits, and numerous opportunities for continuing education. Moving adult-child mentorship out of the volunteer realm – a key innovation – has helped ensure quality, consistency, and commitment.

Campbell didn’t have the good fortune of a steady mentor. A self-described scrappy kid who counted his coins, he tapped a deeper ambition to build a life for himself despite the chaos of his childhood home.

He got through college on scholarships and part-time jobs, earning degrees in finance and law. While Campbell was in college, his mother died of complications related to alcoholism. Several years later, his father, who had been incarcerated twice (for mail fraud and passing bad checks), also died of alcohol-related illness.

Defying his upbringing, Campbell became a certified public accountant at Arthur Andersen and later founded an investment firm, The Campbell Group, which he sold in 1990.

Before creating Friends of the Children, Campbell commissioned a two-year research project to verify his conviction that earlier intervention and steady involvement from adult mentors would build resilience in at-risk children. Seeing positive signs in the resulting data, Campbell formed his organization in 1993 in his old neighborhood, a section of Portland, Oregon, scarred by poverty and crime.

“We select the children who have accumulated the most heartache and trouble in their young years,” Campbell says, “kids who will have little opportunity for success unless we intervene.”

The children in Campbell’s program are faring well. About 96 percent of them attend school, 92 percent have avoided the juvenile justice system, and 98 percent have avoided teen parenthood. A comparable group without mentors demonstrates high rates of dropout, run-ins with the law, and teen pregnancy.

Such accomplishments have attracted the National Institutes of Health. The federal agency is spending $2.91 million for a five-year study, now in its second year, to evaluate Campbell’s program.

“It’s the optimum evaluation technique,” says Campbell, who commissions annual independent evaluations of the organization’s work. “Private funding can only take it to a certain level. It has to have broader community and government support.

“Our vision is that this will be how our community, our society, will care about children,” Campbell says. “It will provide at-risk children with a Friend at the earliest age possible.”

Friends of the Children invests about $9,000 per child yearly, which Campbell says is negligible compared to what’s poured into efforts to rehabilitate criminals and drug abusers. Other agencies and institutions may have bigger budgets, but their impact is smaller, says Campbell, “because they’re working at the wrong end.”

At a very early age in the child’s life, Friends model positive values and behaviors, hold reasonable expectations, and introduce children to new opportunities. Campbell says Friends tend to look at their work more as a calling than a job.

Angel Banta, 40, a Friend since she graduated from Portland State University 12 years ago, just saw her first group of six girls graduate from the program and go on to college and careers. She finds it hard to describe her work.

“It’s a job, but it’s a relationship,” she says. “Some of them call me their big sister. Some of them look at me as their aunt. I have to remember that this is a job, but you get so emotionally attached to the situations they’re going through.”

One of Banta’s girls, 18-year-old Trenee, entered a training program for flight attendants after high school graduation, eager to see the world. Banta remembers Trenee as an insecure six-year-old, the youngest of nine children, forced to repeat first grade.

Now, Banta describes Trenee as “pretty adventurous and open to various cultures,” traits that she and Trenee discovered together. Trenee says her experience in Campbell’s organization saved her: “I wouldn’t have had my best friends or the good jobs I’ve had, learning about computers. And being in the program meant I always had people I could depend on.”

Friends of the Children has yielded many other success stories. The first program participant to earn a college degree – the child of a drug-addicted mother – was infested with head lice when she was assigned a Friend. In another case, a young man became the first African American dance instructor at a local studio, years after a mentor had signed him up for his first ballroom dance class.

“This is what I was called to do,” he says. “I wouldn’t want anybody to have my childhood, but I’m so fortunate to have had it because it’s given me the blessings that I have now.”