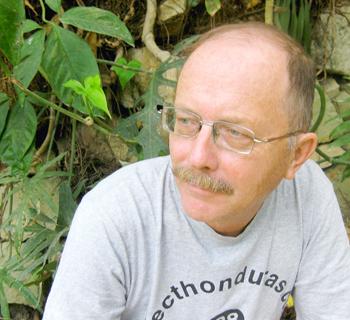 Sedat is regenerating the steepest, most eroded landscape in Copán, Honduras, and helping combat poverty and nutritional issues in the area.

Before retiring from his post as field director at the University of Pennsylvania Museum of Archaeology and Anthropology’s Copán Project, archaeologist David Sedat led the team that discovered the royal tomb of the founder of the ancient Maya city of Copán, Honduras. Copán is a tourist destination, a crown jewel for Honduras’ economy. Paradoxically, the municipality of Copán is one of the country’s poorest. Sedat, 61, an expert on the ancient Maya, noticed striking parallels between the problems facing contemporary Copán and those that brought down the region’s ancient Maya civilization: unrestrained population growth; deforestation and erosion of hill slopes; loss of farmland; diminished water resources; and nutritional deficiencies. Sedat thought, “Why is not more being done now to avert the coming catastrophe?” In 2003, Sedat started the Copán 2012 Botanical Research Station (or 2012 Project, named so because the year 2012 marks the next cycle of the ancient Maya calendar) to turn 20 acres of the steepest, most eroded farmland overlooking the ruins of Copán into an outdoor classroom where individuals, community organizations, and nongovernmental organizations can learn the relatively simple process of land regeneration. To counter desert-like, rocky slopes gullied by erosion, the 2012 Project combines simple soil conservation techniques with different kinds of fruit, medicinal, and biofuel-producing trees. Roughly five years later, lush forest covers the land.