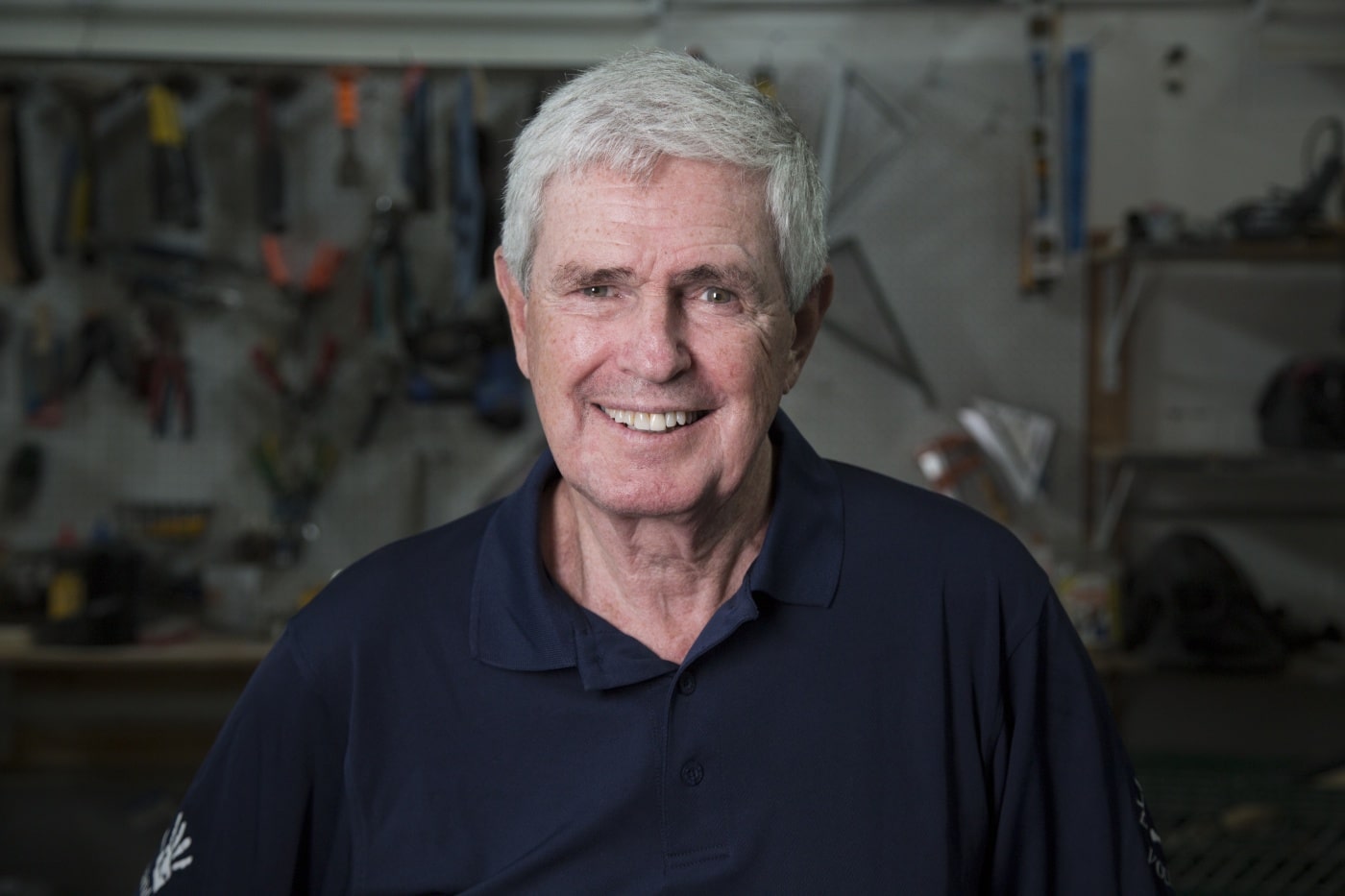 He is using his management savvy to build a highly effective disaster relief organization dispatching volunteers around the world.

Technology executive David Campbell never imagined that a casual lunch with a friend in Boston in December 2004 would change the course of his life. Their conversation turned to the devastating Indian Ocean tsunami that had ravaged Southeast Asia two days earlier. It was a personal shock to his friend who had eaten lunch at a Meridien Hotel in Phuket, Thailand, just ten days before. The hotel had been damaged and several guests killed.

The story deeply affected Campbell, who scoured the web to learn all that he could about the largest natural disaster of his lifetime. When he discovered a hotel in Bang Tao, Thailand, that had been damaged but, miraculously, still had Internet service, an idea formed in his mind: why not use the Internet to help?

So Campbell set up a blog detailing his intention to volunteer in Thailand, using the hotel as his base in hopes of connecting with others eager to get involved. Armed with a wireless router and duct tape, Campbell, then 63, flew to Bang Tao with little idea of what to expect.

Once there, he joined a small group that had put up a website to recruit more people to help. Then, he put on his work boots and gloves and pitched in, clearing debris, mixing cement and helping to build rudimentary temporary housing on concrete slabs for homeless families. Meanwhile, their website began drawing volunteers, first among travelers who were somewhere in Asia, then soon from around the world.

“I went in as one individual,” he recalls. “But we wound up eventually getting 300 volunteers. That’s when my 40-plus years of management experience came into play.”

Campbell and others who showed up to help became known as SUVs (Spontaneous Unaffiliated Volunteers) — good Samaritans who possessed little to no training in disaster environments and few specialized skills, but were united by their desire to work hard for no pay in tough circumstances. Using the hotel as his headquarters, Campbell helped organize a chaotic, global community of random people into a team of effective volunteers.

“He was someone who could hold us all together,” says Darius Monsef, one of the original volunteers in Bang Tao. “I went to Thailand thinking I’d stay 30 days. I wound up staying for five months.”

When Campbell wrapped up his work in Thailand in 2005, he returned home to Massachusetts only to have Hurricane Katrina hit the Gulf Coast of the United States eight months later. Using the model he developed in Bang Tao, Campbell was on the ground within a week in Biloxi, MS, eventually rallying over 1,500 people to help.

These transformative experiences, overseas and closer to home, became the foundation for All Hands Volunteers, the nonprofit Campbell launched in 2005 with a simple mission: to provide immediate and sustainable volunteer support — with minimal bureaucratic obstacles — to communities struck by disaster all over the world.

All Hands volunteers pay their own way to disaster zones. The work is labor-intensive and physical, ranging from debris removal and housing to basic gutting and mucking. They have built 20 schools in Haiti, repaired and built hundreds of permanent homes in the Philippines and developed and implemented an innovative mold treatment program in the wake of Hurricane Sandy. Volunteers have even been known to touch up precious family photos damaged by the storms.

In exchange, All Hands provides tools, meals and basic communal living arrangements in the heart of the affected area at no cost to the volunteers. “I believe that by living in these impacted communities, our volunteers become neighbors who can identify with the local residents,” states Campbell. “This empowers them to help in personal and meaningful ways. It’s life-changing for everyone involved.”

Since 2005, Campbell’s organization has engaged 28,000 volunteers in 45 projects in Indonesia, Philippines, Peru, Bangladesh, Haiti and Japan, as well as dozens of domestic tornado and hurricane impacts — including ongoing volunteer projects in Long Island and Staten Island, NY, rebuilding after Hurricane Sandy. In total, All Hands volunteers have donated 750,000 hours of labor to help 45,000 families and individuals.

While Campbell has partnered with organizations such as Habitat for Humanity, Salvation Army and Save the Children, he is fiercely committed to the belief that volunteers can do good work in tough circumstances despite a lack of formal training. “Our view is that if you get yourself here, if you’re willing to work hard for nothing, then together, we’ll find creative and important ways to help,” Campbell says. “When people are allowed to do the best they can do, clever ideas emerge to solve immediate problems.”

Volunteering, Campbell says, allows individuals to do their best because it unifies the group under one greater purpose: helping humanity. Campbell has personally worked at disaster sites from Biloxi, MS, to the Philippines and Bangladesh, clearing rubble in stifling heat and humidity during the day, and sleeping in makeshift communal housing with strangers at night. Twice, he has survived dengue fever contracted in Haiti.

Such experiences are a far cry from his boardroom days. But Campbell says his corporate experience and his encore career work hand-in-hand. Decades of executive-level work in the tech industry taught Campbell the power of the Internet and its ability to connect individuals. His previous jobs as chief executive of corporations like Computer Task Group gave him the skills to understand the complexities of partnerships and how to manage diverse workers. And sitting on the boards of both public companies and nonprofit organizations taught him the importance of fundraising.

“Raising money is one of the greatest challenges,” Campbell says. “My personal network comes from 40-plus years of corporate life.” Since its inception, All Hands Volunteers has raised over $14 million from 2,200 unique private and institutional donors and aims to bring in at least $3 million in 2014.

“I’ve known David for 40 years as fellow entrepreneurs,” says Ernest Keet, founder and President of Vanguard Atlantic Ltd., who has donated more than $1 million to All Hands. “David is exactly my age, so it was actually quite shocking to see him take a huge risk — both financially and in personal safety. It’s been amazing to see what he’s been able to do.” According to Keet, Campbell’s business savvy has helped All Hands achieve the lowest administrative overhead of any other similar organization.

Beyond helping disaster victims, All Hands transforms the lives of volunteers, who often find a new calling themselves. Stefanie Chang volunteered with All Hands after Hurricane Katrina. A week-and-a-half volunteer stint turned into a five-year job as operations director with the nonprofit. After helping in disaster zones across the globe, Chang says her experience prompted her to pursue a master’s degree in international relations at Tufts University.

“The original idea of All Hands Volunteers was an innovation in itself,” notes Chang. “SUVs are often seen as the black sheep of the humanitarian world. Inexperienced volunteers who aren’t well-managed can cause problems. But David has shown what a scrappy little organization can do.”

As for Campbell, All Hands Volunteers has given his life deeper meaning. Surrounded by photos and memorabilia from his many volunteering trips, Campbell, now 72, says he has no intention of packing in his encore career. “My goal is to remain as highly effective as I can be in this next phase of my life — to live a life that has purpose.”

In recognition of his extraordinary encore work, David Campbell was awarded The Purpose Prize for Future Promise (sponsored by Symetra) in 2014.

2015 Update: All Hands Volunteers, Inc.’s 30,000 volunteers have helped over 50,000 families, via more than 50 relief projects in nine countries and dozens of domestic locations. Read Campbell’s book: “All Hands: The Evolution of Volunteer-Powered Disaster Response Organization.”