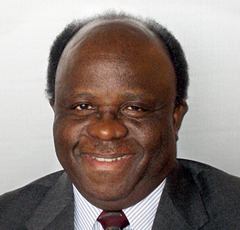 Shungu is working to purge onchocerciasis, a leading infectious cause of blindness, in the Democratic Republic of Congo through community-based distribution of medicine.

Seven million people are infected and approximately 70,000 are already blind or visually impaired in Shungu’s native Democratic Republic of Congo, where he is focusing his work. Once a person becomes blind, he or she becomes dependent on family members, especially children, who end up forgoing school to tend to their blind relatives.

Through training, capacity building and community empowerment, Shungu’s Lawrenceville, N.J.-based organization, United Front Against Riverblindness, is putting free medicine in the hands of local communities through designated community distributors who administer the drugs annually over a 10-year period to those affected. The distributors take personal responsibility for the success of the treatment and are in turn highly respected and recognized with gifts from their communities.

Nearly 1 million doses have been distributed so far. Early distribution success has encouraged Shungu to expand the efforts into new regions. Of his work, he says: “The satisfaction of realizing that the lives of many of the much less fortunate and previously helpless people in remote parts of Africa are being changed for the better is very hard to describe.”