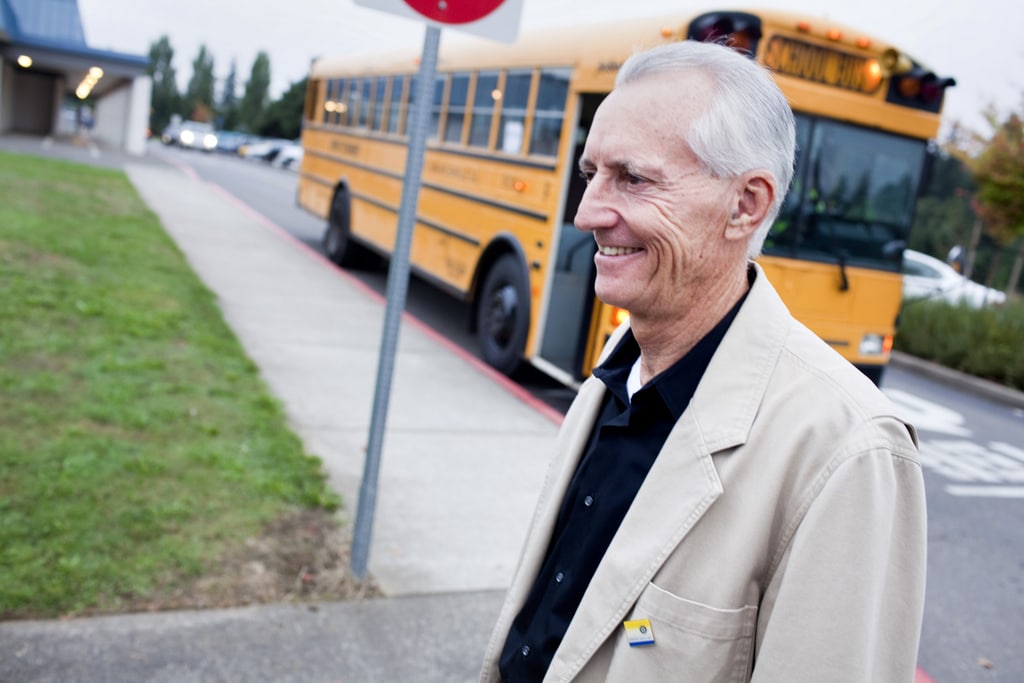 Childs improves the lives of vulnerable children and their families in Tanzania by creating farming cooperatives, building classrooms and opening clinics.

Barry Childs left Tanzania, his childhood home, as a college-bound teenager, eager to prepare for a comfortable corporate career. When he returned 35 years later, the African country was a vastly different place.

It was 1998. AIDS had orphaned an overwhelming number of children. Villagers were desperately poor. And for many, prospects for a better life were virtually nonexistent. During that visit, Childs decided he would leave his corporate career to help. Less than two years later, he resigned his executive post at Abbott Laboratories and created Africa Bridge.

“The poverty in Tanzania is of an entirely different scale from what we know here,” Childs explains. “Someone in the U.S. earning the minimum wage makes roughly $70 a day, but the average income in rural Tanzania is 70 cents a day. There are well over 2 million orphaned children in a country of just 40 million people.”

Focusing on economic development, Africa Bridge helps vulnerable children and their families in Tanzania. In a decade, it has expanded to 16 villages, improving the lives of thousands of villagers.

The nonprofit, whose U.S. headquarters are based just outside Portland, Ore., has set up 28 income-generating farming cooperatives for caregivers and built classrooms and clinics for thousands of children. In 2009 alone, Africa Bridge implemented comprehensive care plans – covering housing, clothing and food, social and legal support and schooling – for 3,557 children.

Childs himself had experienced an idyllic boyhood accompanying his father, a British agricultural officer, from village to village. But as an adult, “I’d been rushing around the world and had pretty much forgotten about Tanzania,” Childs says in a soft accent that reveals his British heritage.

He feels that fate brought him back in 1998. Lanky and athletic, Childs set out to visit the high mountain villages he remembered from his childhood. Tanzania was in many ways the same beautiful, peaceful place.

“What hadn’t changed were the people. They were wonderful and welcoming,” says Childs. “What had changed was the poverty and HIV/AIDS. The combination was devastating.”

After he quit his job in 2000, Childs (who does not draw a salary from Africa Bridge) returned to Tanzania to interview government and business leaders, journalists, educators and AIDS patients. Although he originally believed Africa Bridge would be dedicated to helping leaders find solutions to problems, just as he’d so ably done throughout his corporate career, he determined that helping the orphans and their caretakers would be the organization’s top priority.

A father of three, Childs observed that in some villages, nearly half of the children were orphans. Although villagers traditionally take in orphans and care for them along with their own children, Childs saw what a terrible strain that added.

“The choices these people have to make, I can’t imagine,” he says. “With so many children, they have to decide who they can feed that day.”

Childs went back to Tanzania in 2002. In the village of Idweli he organized a three-day meeting with 64 children, eight from eight villages each, who expressed their needs and desires. Sitting in a circle, African style, Childs listened attentively to the children. Then eight of the children were joined by more than 50 adult leaders for a second three-day meeting, to decide a course of action. On the last day, participants of the second meeting agreed on a plan and elected an organizing committee.

Childs was moved at how caring and considerate the children were of each other, particularly of the orphans among them. Every child dreamed of going to school, Childs recalls, but at $25 per year, schooling was beyond their reach.

Childs figured that lifting the villages’ economic situations would help the children. So Africa Bridge began issuing micro-loans (very small loans designed to spur entrepreneurship) and helping villagers establish agricultural and livestock cooperatives. A portion of the income was then dedicated to a Most Vulnerable Children Committee in each village, which assured that orphaned and needy children had proper care. In the process, the village economy and health, as well as the status of women, improved.

Childs notes several success stories, such as the recent, relative prosperity of a village woman known as Granny Witness. She parlayed her pig co-op into a growing enterprise that has created employment opportunities for many villagers.

Economic improvement in the 16 villages helped by Africa Bridge brought a surge of school enrollments. Some teachers had more than 200 students. The modest schoolhouses were running out of room. Help came from an unexpected source.

Six years ago, Childs was invited to speak to a fourth grade class in his home of West Linn, Ore. He sat with the children and told them stories about children living on the far side of the world. His dramatic storytelling made an impact on the students and they decided to help Africa Bridge by raising money. The next year, their entire school pitched in. Over time, the children in Oregon were able to help finance construction of several classrooms and eventually, electricity for the school in Tanzania.

“When the email came back with a photograph of a light switch, it was quite a moment,” recalls Judith Stickney, deputy superintendent of the West Linn-Wilsonville School District.

Childs recalls how moved the villagers were by the American children’s contributions. A village chief, with tears in his eyes, asked Childs, “Do you mean that children in your village want to help children in my village?”

Alfred Magalla, who is a coordinator for the Most Vulnerable Children Committees on behalf of Abbott Laboratories’ Abbott Fund in Dar es Salaam, says the village children fully appreciate the fact that American children are helping them. “The support they are getting they appreciate very much. They know where it’s coming from.”

Gary Grossman, who volunteers his marketing skills for Africa Bridge, accompanied “Papa Barry,” as Childs is known in Africa, to Tanzania in 2009. There he saw how important schooling is to the children and their families. Childs was leading Grossman and other visiting dignitaries through a village when suddenly the air was filled with the din of about 150 boisterous children returning home from school.

“The kids came running down the hill in their bright red school uniforms,” recalls Grossman. “And there was noise and laughter and just the whole village scene was transformed by these children. And they all were so proud to be in their uniforms.”