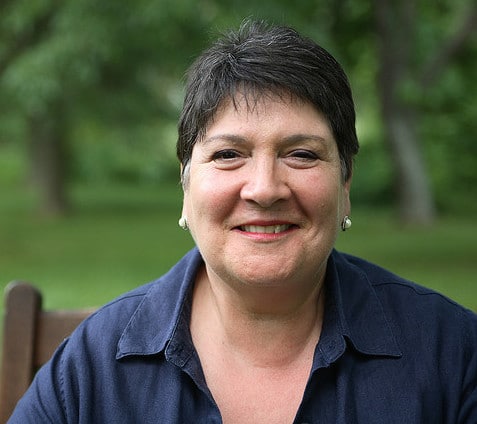 Advancing humane treatment of farm animals through certification and labeling.

In the late 1990s, Adele Douglass was appalled and morally outraged by the rampant mistreatment of farm animals in the United States. In 2003, determined to make change, she created the nation’s first process to certify – and inform consumers – that animals were treated humanely from birth to slaughter.

Douglass’s nonprofit organization, Humane Farm Animal Care, continues to be the only organization that includes inspections in its certification of U.S. farms and slaughterhouses. Douglass notes that certification provides a triple win – protecting animals; helping farmers, who receive higher prices for their products; and helping consumers, who want to know that the animals are treated well and not given prophylactic antibiotics. In 2003, 143,000 animals in the U.S. were raised under certified humane standards. Just three years later, that number jumped to more than 14 million.

Raised in New York City, Adele Douglass “had a rosy picture of farm animals walking through fields.” Ten years ago, as director of the American Humane Association’s Washington, D.C. office, she began to look closely at the treatment of farm animals in the United States. What she found astonished and appalled her.

Chickens kept in such crowded conditions that they can’t raise their wings. Pigs kept in “gestation crates” for breeding that are so small the animals can’t turn around. Cows given feed treated with antibiotics and hormones. Animals raised without adequate food and water or protection from the elements. Brutal slaughterhouse techniques that prolong pain and suffering.

“I was absolutely stunned by how animals were raised differently from what I had imagined,” Douglass says. “I’m not saying every animal should have a water bed, but an animal – for whatever short time they’re with us – needs to be able to do what they do. Birds flap their wings, they walk, they scratch. Pigs need to root, they need to walk, they need to move. You cannot keep a pig confined for months and say that’s okay. I knew that I needed to so something to help.”

Douglass spent years researching the issue and during what she jokingly calls “a moment of insanity” in 2003, she cashed in her pension plan and immersed herself in the creation of a nonprofit called Humane Farm Animal Care.

“I was scared to death,” she says of those early days. “I started working out of my apartment seven days a week, 18 hours a day, and you forget you’re scared because you’re so busy.”

In a few short years, Humane Farm Animal Care has created standards for the quality care of farm animals and a market-based inspection, certification and labeling program that protects animals; helps consumers choose meat, poultry, eggs and dairy products from animals that were treated humanely; and helps farmers, who receive higher prices for their products.

In 2003, 143,000 animals in the United States were raised under certified humane standards. Just three years later, that number jumped to more than 14 million.

Why a certification program? Given Douglass’s experience in Washington, it didn’t take her long to figure out that legislation wasn’t the answer. “It took literally 100 years for the Humane Slaughter Act to pass,” she says. “And even if you can get a bill passed, you can’t get it enforced.”

So, in the late 1990s, Douglass traveled to England, literally “schlepping from one pig farm to the next” with a colleague to study that country’s answer to the animal farming dilemma. English grocery stores carried “Freedom Food,” a single brand of humanely produced farm products.

“I saw the impact of English farmers’ efforts, and I thought: ‘This is simple. This is the marketplace solution,'” she says. “‘This would give consumers a chance to vote with their pocketbooks.'”

Given the competition of the American marketplace, Douglass determined that a certification program – a voluntary, user-fee based service available to producers, processors and transporters of animals raised for food – could work.

With her pension, a $10,000 contribution from her daughter, and zeal, Douglass got busy. It wasn’t easy, but eventually she secured funding from the American Society for the Prevention of Cruelty to Animals and The Humane Society, among others, and things started falling into place.

Douglass worked with a team of animal scientists and veterinarians to establish standards, mandating that farmers who want to be certified allow animals to engage in natural behaviors, limit stress, and provide appropriate space for roaming, fresh water and food without added antibiotics or hormones.

Douglass established the Certified Humane Raised & Handled label, which farmers can display once they prove that they adhere to the guidelines. She then applied for International Standards Organization (ISO) Guide 65 accreditation, provided through the USDA. Following an extensive audit, Humane Farm Animal Care became – and remains – the only certification body for animal welfare that is ISO-accredited in the U.S.

While there are other similar certification programs today, Douglass says hers is the only one certifying that animals are treated humanely from birth to slaughter, and the only one that inspects each farm and slaughterhouse at least annually.

Notes from the Field

Alan Zuschlag of Touchstone Farm in Amissville, Virginia, says the Humane Farm Animal Care certification program “has been a godsend in marketing my products. With the “certified humane” label, not only do customers know that my lamb products are good tasting, but they also receive some assurance that much care has been taken to allow these animals to lead healthy, happy, and natural lives. That is a huge consideration for many consumers today.”

Zuschlag lauds Douglass’s vision but says the program wouldn’t be successful without her ability to follow through. “She saw the problem and created a solution for it before a lot of livestock producers even saw that need,” Zuschlag says.

The Humane Farm Animal Care program is “realistic about the realities of farming,” Zuschlag adds, “and yet they don’t cut any corners to make it easier for the farmer at the expense of animal welfare. They get the balance just right.”

Douglass says she never would have been able to take on such a daunting task without being armed with everything she had learned in the previous decades, as a mother, Capitol Hill staff member, lobbyist, and nonprofit executive.

“I had contacts, knowledge, experience, a little more freedom because the kids were all grown and gone,” she says. “You reach a point where you’re just going to be who you are and not worry about what anyone else thinks. You have a confidence and assurance level that comes with age.”

She also attributes her success to her family, a passion for animals, and a desire to change the world, which she believes was instilled by her parents.

“I’m at a point in my life where there are two things that are important to me,” Douglass says. “One is to leave the world in a better place than I found it, and the other is to make happy memories for my grandchildren, and that’s pretty much it.”