These grandmothers are fighting for climate justice and future generations 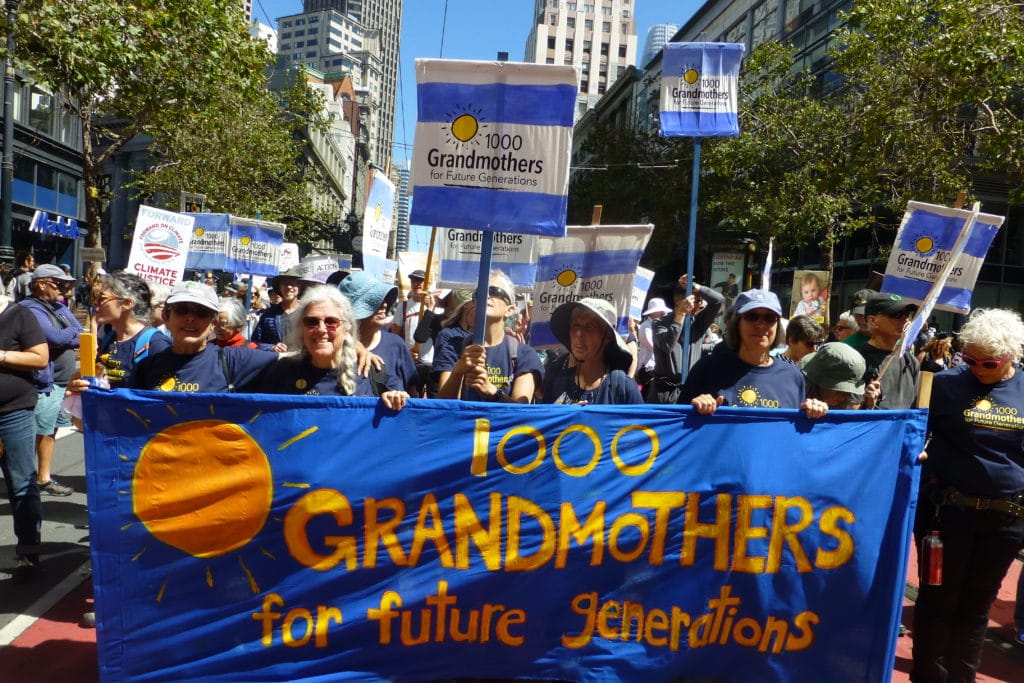 1000 Grandmothers and allies march in the 2018 climate strike.

Nancy Feinstein has been a social justice activist for over 55 years, including feminist, gay and anti-racist activism. She hadn’t been drawn to the environmental movement for most of that time. But about 10 years ago, she learned more about climate activist Bill McKibben’s work, and her perspective changed.

“I realized none of the other issues can get addressed,” she says, “if we don’t address climate.”

Feinstein started following McKibben’s writing and his organization, 350.org. When he called for people to come to Washington, D.C. in 2013 to demand action on climate change, her then 28-year-old daughter asked her to join her in his call for nonviolent civil disobedience. They both travelled to DC and got arrested together — along with over 1,100 others.

“The more I learned about the climate movement,” she says, “the more I felt like, okay, this is where my focus has to go. It’s not exactly what I envisioned for this stage of my life, but it is a crisis that can’t be ignored.”

At the same time, Feinstein began to notice that she was being marginalized as an older woman. She wanted to put the two – climate change and ageism – together. She gathered with a small committee of older women who also wanted to do something about climate, and they started meeting in Berkeley, California.

“We were moved by the grandmothers at Standing Rock,” she says, “and our first work was supporting their struggle as water protectors, against the Dakota Access Pipeline.” Using the indigenous definition of grandmothers – elder women who are concerned about future generations – they began reaching out to other women.

“Grandmothers have a powerful heart connection to future generations,” says Feinstein, “and we have a modicum of ethical weight in the culture at large.”

They wanted to help build a powerful grandmothers’ voice in the climate movement and named themselves after an anti-war song by Holly Near that highlights the power of grandmothers. As of September 2019, their numbers reached over 1,000.

1000 Grandmothers created T-shirts, helped by arts activist David Solnit, made banners, signs, and marched over 100 strong in the 2018 and 2019 climate strikes in San Francisco. “Young people and other groups have very warmly welcomed us into the climate justice movement,” she says.

They have worked on legislative struggles against the fossil fuel industry, started advocating for the Green New Deal, and joined the struggle to stop local refinery plans that are scary to everyone – but particularly dangerous to the front-line communities that live near the refineries. They have “held down the streets” – risking arrest – to support indigenous and youth climate leadership. They have created political art and are building real collaborations. Feinstein reflects, “I love building community and power with grandmothers and allies.”

Many of the grandmothers are long-time activists. “We’ve spent decades working in different movements, and organizations,” Feinstein says. “We have thousands of years of collective experience. And we have the advantage that many of us are in a position, and are willing, to take more risks to support front-line struggles. And most of us have developed wise impulses to avoid going down paths we know won’t turn out to be productive.”

Now, with the COVID-19 pandemic, Feinstein says all the grandmothers are experiencing the particular challenges of being elders at this moment in history. But the members of 1000 Grandmothers continue to organize, as they can, online. Their 1000 Grandmothers Bay Area Facebook page is active and a more robust website is on the way.