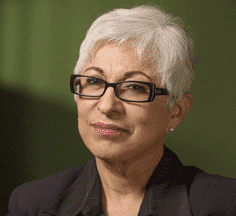 When journalist and cancer survivor Ysabel Duron turned the camera on herself, she launched an encore career that shines a spotlight on cancer for Latino communities across the United States.

In 1999, during a cervical checkup, TV anchorwoman Ysabel Duron’s gynecologist discovered a golf ball-sized cancerous tumor in her pelvic region. The diagnosis: Hodgkin lymphoma. She felt healthy and, strangely, unworried. So Duron, who had been on the air in San Francisco for years, turned the camera on herself—and on the larger issue of cancer treatment.

She broadcast it all: being pumped full of chemotherapy drugs, shaving off her hair, receiving radiation treatment. She also visited support groups and interviewed cancer patients “to make it [about] learning, because there was still a big bugaboo around the word ‘cancer,’” she recalls. The resulting three-part documentary, “Life With Cancer,” won a Radio Television New Directors Association award, and Duron became a poster child for cancer treatment.

After she recovered, she was haunted by how few other Latinos she had seen receiving treatment. Questions about how, and where, Spanish-speaking cancer victims got help plagued her. She had survived. But how many did not?

That’s why when the Cancer Prevention Institute of California asked Duron to work with a group of Latina women around issues of breast cancer, Duron leapt at the chance. She helped establish the 501c3 nonprofit Las Isabellas, which organized the first Mothers Day Walk Against Cancer.

But she felt called to do more, by expanding the visibility of low-income Latinos fighting the disease. “So began my encore career—carved in experience, inspired by need, honed in a huge learning curve about the issue,” says Duron, now 66.

In September 2003 she founded Latinas Contra Cancer (Latinas Against Cancer), an organization committed to educating, supporting and providing essential services to low-income Spanish speakers suffering from the disease.

Since then, LCC has offered a range of programs that support and teach more than 2,700 men, women and children about the disease, resulting in more than 300 preventative cancer screenings. The group has provided psychological and social support to several dozen patients per year. And out of 50 who suffered terminal cancer, LCC navigated 35 of them into hospice—a novel and important success rate in a community unfamiliar with this kind of care.

The call to action Duron answered has had an impact far beyond the Bay Area. Her passionate commitment is helping Latino communities across the U.S. gain access to cancer support, information and treatment about cancer. Duron’s game-changing networking, partnerships and legislative advocacy have been the hallmark of an encore career with significant social impact.

The social need is great. Cancer is now the leading cause of Latino deaths in the U.S., killing one in five, a rate higher than heart disease. And for Duron, framing the message of cancer prevention and helping organize social and psychological support for those most in need has become her mission.

Her long history as a minority woman in broadcast journalism prepared her to build this movement in the second stage of life. Duron started as a broadcaster in 1970 and immediately confronted the challenge of working in a white, sexist and male-dominated
journalism industry. But she adapted and persevered, pioneering a new role as a Latina newswoman as she covered social justice movements like the Black Panthers, anti-Vietnam rallies and the United Farm Workers struggle.

She helped launch the country’s first minority news magazine show, “All Together Now,” and Oakland KTVU’s “Minority Report” where she “started to shape what people know about minorities.”

“I had to prove that a female and a Latina were not there just because of EEOC rules or affirmative action,” says Duron, who became senior anchor for San Francisco’s KRON 4 Weekend Morning News in 1991. “I knew I had a responsibility to represent this community of color: that I had to operate with integrity and shine a light. All the challenges kept preparing me to stand up for something.”

With Latinas Contra Cancer, Duron answered that call. Today, the group—which employs eight, operates on an annual budget of $425,000 and is headquartered in downtown San Jose—is the leading national voice for advocacy and services relating to the prevention and treatment of cancer in the Latino community. LCC brings cancer awareness to Spanish speakers through education about early screenings, eating right, getting exercise and diminishing toxins in their environment.

Duron says dispelling the myths and misconceptions about cancer—that it’s a punishment from God, that it’s contagious or that it means an automatic death sentence—remains a challenge in the traditional Spanish-speaking community. Poverty, language and culture barriers also keep many Latinos from seeking preventative screening, which translates into later stage diagnoses and disproportionately high mortality rates. The goal, says Duron, is “to activate a conversation—at schools, at their workplace, at churches—because these facts get people talking.”

The organization’s bilingual website, www.latinascontracancer.org, has clearly been another conversation starter, drawing 2 million hits since it launched.

Through LCC’s Patient Navigation program that launched in 2010, Latino cancer patients
receive one-on-one guidance through the treatment process, from diagnosis to end of life.
More than 310 patients with 40 different kinds of cancer have been “navigated” through the program. LCC’s support groups, financial services and distribution of wigs, bras and prostheses have helped hundreds more.

When Linda Cordero’s one-year-old boy, Frederick, was diagnosed with a rare childhood eye cancer, she called LCC “in very desperate need. We were behind on our rent, we had no money to take him through treatment,” she says. “Ysabel offered us gas cards to drive him [to the San Francisco clinic] three times a week. That was a blessing to us.”

Duron has developed national health networks where none existed before. In 2008, Latinas Contra Cancer convened the first National Latino Cancer Summit, bringing together health care providers, researchers and community-based agencies—including from Puerto Rico, Mexico and Spain—to network and share knowledge. (The fourth Summit in 2014 will look at impacts of the Affordable Care Act on Latinos with cancer.) The nine-year-old Health Bingo program teaches thousands about breast, cervical, prostate, colorectal and lung cancer from Orlando to San Francisco.

She’s also always forging new partnerships. Among the most recent are collaborations with major universities including UCSF, Stanford and the Georgetown Lombardi Cancer Research Center, where researchers are conducting a study on breast cancer patients and their caregivers. Another, with the Stanford Cancer Institute, aims to build coding that makes cancer data simpler to access and analyze. LCC is even working with San Jose high school students to create a mobile app to educate Latino youth about cancer.

Duron is now committed to reshaping federal policy, law and funding. An advocate for extending the Affordable Care Act to cover more immigrants, Duron believes “everyone deserves the best treatment they can get when they’re ill.” Earlier this year, she pushed to get language written into the immigration bill that would allow insurance companies to create a special lower-cost product for undocumented immigrants. “They’re going to stay
here, they need health care,” she says, so “give them a tool they can pay for.”

Behind the scenes, Duron was appointed in 2011 to the federal Interagency Breast Cancer and Environment Research Coordinating Committee. Her recommendations to increase cancer research on minority women made it into last year’s State of Science on Breast Cancer report delivered to Department of Health and Human Services Secretary Kathleen Sebelius.

After her own experience fighting, surviving and “putting a human face on the big C,” Duron’s great empathy for cancer patients has made her utterly clear on her bigger purpose in the second stage of life. “I was meant to do this—to be a voice for an underserved, underrepresented population without a voice.”