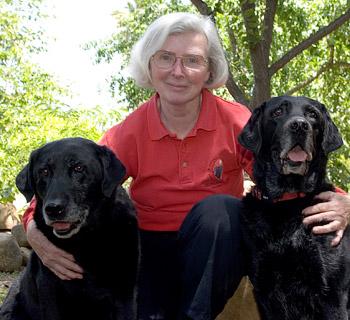 When disaster strikes and people are buried by rubble and possibly unconscious, one trained dog can often find the injured more quickly than 20 human searchers. And yet, in 1995, when Wilma Melville and her Labrador, Buddy, were called to help after the Oklahoma City bombing, there were only 15 FEMA-certified canines in the nation, all handled by volunteers.

So in 1996, Melville, then a retired physical education teacher, founded the National Disaster Search Dog Foundation. Melville started with abandoned dogs from the pound, developed an innovative program to train the dogs in about a year (instead of the previously typical two to three years), then paired the dogs with firefighters for additional training free of charge. Today, there are 150 FEMA-certified dogs in the United States, many working side by side with firefighters, which improves disaster readiness. Melville’s organization has trained 40 percent of these canine search teams and 83 percent of the teams in California. The trained teams have searched for survivors after a wide range of disasters, including 9/11 and Hurricanes Katrina and Rita.

On April 9, 1995, the Alfred P. Murrah Federal Building in Oklahoma City was bombed. The blast destroyed a third of the building, leaving a 30-foot wide crater. More than 300 buildings in a 16-block radius were destroyed or damaged, and 80-some cars were burned or destroyed. Shattered glass accounted for five percent of the death toll and 69 percent of the injuries.

Wilma Melville, a retired physical education teacher living in California, and her dog Murphy, a black Lab trained as a FEMA-certified search dog, spent a week in Oklahoma City, combing through the wreckage. The destruction and suffering Melville saw staggered her.

“It wasn’t the dead as much as the survivors,” she recalls. “People who would literally ask you, on a daily basis, ‘Did you find my wife?’ then show you a photograph. It’s like someone reaches into your chest and squeezes your heart.”

Melville was struck, too, by how few trained dogs were at the scene. In disasters, when people may be buried or unconscious, search dogs are “an invaluable asset,” says Henry Renteria, director of the Governor’s Office of Emergency Services in California. “Their ability to detect live humans in environments, where even the most sophisticated equipment can’t, dramatically increases the victims’ chances of surviving.”

At the time, there were only 15 FEMA-certified dogs in the entire United States. All were handled by volunteers, like Melville. After she returned home, a revelation hit.

“I thought, ‘What if I trained one dog for everyone who died in Oklahoma City? One hundred sixty-eight Murphys would make a real difference,'” she recalls. “And what if those dogs were in the hands of firefighters already trained to respond to disaster? I felt as if every single thing I’d done thus far in my life was coming together. I’d been a teacher, so I knew I could write a curriculum. I’d raised four sons, so I knew I could teach firefighters. I had a trainer, who could teach the dogs. And I had perseverance.”

The next year, Melville opened the National Disaster Search Dog Foundation. In the decade since, Melville revolutionized rescue dog training. The Foundation has produced 85 canine-firefighter search teams, and remains the only organization in the country dedicated to partnering rescued dogs with firefighters and providing them at no cost to fire departments. Thirteen dogs trained by the Foundation were deployed at Ground Zero just after 9/11. Others have responded in tornadoes, floods, mudslides, and Hurricanes Katrina and Rita.

“When people see dogs working, they know that everything that can be done is being done,” Melville says. “And they know that if someone is alive, they will be found.”

Melville started her work with three dogs, volunteer labor, small donations coupled with her own savings, and a lot of sweat equity. “It was a rough road,” she says, “but I knew that one can be many, many times beyond tired and still function. It’s people who are older who have real endurance.”

Melville aimed to train more dogs in less time and with fewer resources than anyone had ever done before. To do it, she created a highly successful new model for identifying and training search dogs. Unlike other efforts, the Foundation:
Finds search dog candidates at shelters instead of by breeding puppies specifically for the task. The difference in approach saves potentially doomed animals. “Often these animals were discarded because they have the very qualities that make them great rescue dogs,” Melville says. “They need to work. When left alone in a suburban backyard, they destroy the place.”

Chooses dogs at eight months to two years of age – a decision that allows the Foundation to select those animals that have already exhibited the boldness, high-energy, prey drive and focus that make great search dogs.

Recruits interested firefighters whom Melville describes as “like the dogs – bold, outgoing, friendly, in good shape, and driven to succeed.” The Foundation is the only organization that pairs dogs with firefighters and trains the team at no cost to local fire departments.

Trains animals and firefighters separately, then pairs each dog and human up in a good “marriage” and trains them together, using a systematic, standard curriculum.
Offers ongoing training during the working life of the dog – about 10 years.

Guarantees lifetime care for all dogs rescued, even those that proved unsuitable, become ill, injured, or retired.

These innovations have enabled the Foundation to raise the percentage of dogs that succeed at disaster search training from 15 to 85 percent, and to reduce the time required to reach certification from several years to 11-14 months. No other organization has matched this record.

Those on the front lines understand the value of Melville’s work. In 2005, when the New York State Office of Fire Prevention and Control decided to establish disaster search canine teams, it turned to the Foundation because its “training regimen provides the ability to produce a certified team in a much shorter time frame,” says John Mueller, New York’s Acting State Fire Administrator. “This regimen also reduces the failure rate of the animals. Through Ms. Melville’s leadership, the Search Dog Foundation has evolved into a premier disaster search canine training organization.”

Charley Hurley, deputy chief of special operations for the California Office of Emergency Services, agrees. “The Search Dog Foundation is one of the best, if not the best in the nation, in training urban search and rescue dogs.” Having enough trained search dogs is of great concern in the earthquake-prone state.

In the wake of 9/11, Melville was able to build a strong case for the need for more rescue dogs – and raise funds to help make it happen. Today the Foundation’s work is supported by 83 estate donors, dozens of foundation grants, and contributions from both individuals and large corporations.

Melville’s goals for the future remain ambitious – she wants the nation to have “an absolute minimum of 330 FEMA-certified canine disaster search teams” as soon as possible – and her motivations clear.

“As you get older, you carry all those facets of what you’ve done in your life, and one day, you have the opportunity to focus them on one problem,” she adds. “I was, and continue to be, driven by the experience of being in Oklahoma City.”