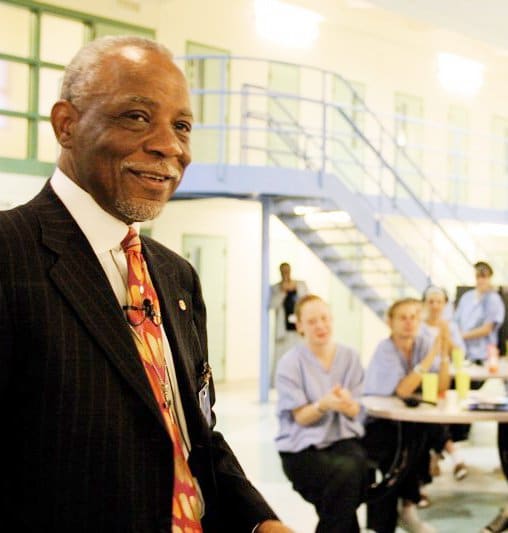 Wilson Goode is perhaps best known for his two terms as mayor of Philadelphia (from 1984 to 1992). But in 2000, at age 62, Goode earned a Doctorate of Ministry and took a job as director of Amachi, a nonprofit established to help the 7 million children who have one or both parents either in jail, on parole, or under state or federal supervision.

The problem was close to his heart – when he was 14, Goode’s father was sent to jail for assaulting Goode’s mother. The solution was just as personal. Goode paired a proven intervention – mentoring – with a faith-based recruitment strategy. He rallied pastors in predominantly African American communities, who then encouraged their congregants to serve as mentors. Today more than 240 programs in 48 states are affiliated or inspired by Amachi – a Nigerian Ibo word that means “who knows but what God has brought us through this child.” Mentors have helped more than 30,000 children of incarcerated parents. Without intervention, experts suggest, 70 percent of these children would follow their parents to jail.

“When I walked into a room at the women’s prison in Philadelphia for the first time, 150 women were waiting for me. I said, ‘I’m W. Wilson Goode and I’m here on behalf of your children.'”

The women – unable to be a regular presence in their children’s lives and clearly worried about their kids – were stunned that a former mayor of Philadelphia would show up at the jail, let alone announce that he was there to help. They stood up and applauded.

“I asked them, ‘Do you want to see your children end up where you are?’ and I explained the Amachi program. Ninety percent of the women signed up their children on the spot.”

On any given day, more than 7 million children in this country have one or both parents behind bars, on parole, or under state or federal supervision. Some experts believe that, without intervention, 70 percent of these children will also end up behind bars.

Launched in 2000, Amachi is a national mentoring program for children of inmates – children who have never before been singled out for systemic, national intervention. And while mentoring, in and of itself, may not be innovative, Goode’s method for finding mentors is new: he reaches out to the religious community, vigorously recruiting religious leaders who then rally their own congregants to serve as mentors.

Today Amachi has inspired more than 240 programs across the country that serve approximately 30,000 children between the ages of four and 19. More than 100 are affiliated with Amachi, a Nigerian Ibo word that means “who knows but what God has brought us through this child.” Amachi requires that at least 51 percent of the matches have to come from local congregations, which can be of any denomination. Churches, synagogues, mosques and temples all qualify.

Sadly, Goode knows firsthand what it’s like to have a father in jail. When he was 14, his sharecropper father was sent away for assaulting Goode’s mother with a hoe. That was hard enough, he says, but “what made it tougher for me was seeing him shackled as part of a chain gang that worked directly across from our farm.”

Goode once thought that his father’s incarceration was not a factor in his initial involvement in the Amachi program. “I had put that period of my life out of my mind,” he says. “Then it suddenly hit me that I was being used by God to help children who had suffered an experience similar to mine and that I could speak with authority on this issue.”

With funding from the Pew Charitable Trusts, the Amachi model was developed as a partnership of the nonprofit Public/Private Ventures, the University of Pennsylvania, Big Brothers Big Sisters of Southeastern Pennsylvania, and 42 church congregations and launched in Philadelphia in September 2000.

“When Amachi started I had just received my Doctorate of Ministry from Eastern Baptist Theological Seminary,” says Goode, who was 62 at the time. “My dissertation was on moving congregations from looking inward to looking outward to their community. Research showed that a congregation would become involved in the problems of a community if asked to by their faith leader.”

When John J. DiIulio Jr., who served as President Bush’s first director of the White House Office of Faith-Based and Community Initiatives, asked Goode to head the group, it took him less than a minute to decide.

Statistics suggest that children of incarcerated parents are more likely to use and sell drugs, use alcohol, play hooky, and misbehave. That is, unless you pair them with adults willing to spend an hour a week with them for at least a year. Amachi stresses that the number of hours spent together is less important than consistency. A consistent relationship can change the direction of a child’s life.

For most people, statistics are boring. The children are not.

Seven-year-old Brandon’s father is dead, and he last saw his stepfather six years ago. Darryl Cofield, mentor to both Brandon and to his older brother, laughingly says that if he promises to be at the house at 3 p.m. and isn’t there by 3:01, Brandon will call and ask where he is.

“Once, when I couldn’t get over to see the boys regularly,” continues Cofield, “Brandon’s brother told his mom that I was treating them just the way his father did. That hurt. I told Brandon that I’m not going anywhere. I’m going to be around. I’ll be there for your high school graduation and for your college graduation.”

“We’re blessed having Craig in our life,” says the boy’s grandmother. “Tykeem’s changed a lot since he started coming around. He’s a lot calmer.”

Inmates’ children most often come from the rough inner-city neighborhoods of Philadelphia; so when Goode got started, he decided to find mentors familiar with the lives these kids lead. For 60 days, he visited 50 pastors in predominantly African American churches in Philadelphia. Forty-two of them signed on, and 450 congregation members volunteered to be mentors.

Next Goode needed the children. Social service agencies don’t give up names, families of convicts rarely speak publicly, and schools don’t keep such records. “So for the next 60 days, I went to local prisons and collected names of 2,000 children,” Goode explains. “Amachi took form in Spring 2001 once we had the two necessary things: volunteers and children.”

Soon Amachi was helping 500 children in Philadelphia. President Bush visited the city twice and saw Amachi in action. After his second visit, Congress appropriated $150 million for the program. Growth since then has been exponential.

Amachi programs are hosted and run by local nonprofits, most notably Big Brothers Big Sisters of America. Amachi’s national staff provides training and technical assistance to those on the front lines. Between December 2003 and June 2006, Amachi conducted 62 training programs for 1507 people from 539 organizations in 47 states and 313 cities.

Goode says, “Our job is to inspire, train and provide technical assistance to local community agencies that receive the money. People who run the programs say that what we do makes it possible for them to do what they do.”

The Roots of Involvement

Goode’s career included a stint as director of the Philadelphia Council for Community Advancement, a housing nonprofit. “At one point the executive director and all of my bosses resigned. The board said, ‘You’re the only one left. Close the agency and give the money away. Ford [Foundation] won’t fund us anymore,” Goode recounted. “So I applied to Ford for more money and they provided it. I set up a nonprofit housing agency to build houses for lower to moderate income families. From 1968 to 1978, I helped build 2,000 houses in this area.”

Then the Governor’s office called and asked him to become a member of the Pennsylvania Public Utilities Commission. He wasn’t particularly interested. “The next day I was at a funeral and mentioned the offer to a judge I knew. He asked, ‘You said yes, didn’t you?'” Goode told him he said he wanted to think about it. “The judge slapped me on my head and said, ‘What’s wrong with you? This is the most significant position for an African American in the Commonwealth of Pennsylvania.” Goode went on to become chairman of the commission, then managing director of the city of Philadelphia, then mayor for two terms.

He was 62 when he took on the challenge of Amachi. “When I was young, I thought I could do everything,” says Goode. “Now that I’m in my seasoned years I’m content to pour my energy into establishing a sustainable program that will help rescue these children from a sure life in prison.”

Age, he continues, “gives me the sense that I don’t have 50 years for a project, but that while I have the time I should do all I can to create something that wasn’t there, to leave a legacy.