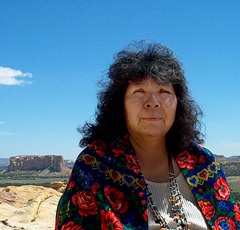 Vina Leno created the intergenerational Language Retention Program as a community-based language immersion program with the goal of revitalizing the Keres language and preserving cultural values and traditions. More than 300 children, from kindergarten to 12th grade, have participated in the program at their public schools. Many of these students have begun to identify themselves by their traditional names and are using Keres phrases in their conversations.

Leno’s previous tribal government positions in the Pueblo of Acoma, including work as a health services administrator, have allowed her to form strategic partnerships with tribal departments and state agencies and enabled her to offer Keres language classes as credit hours for high school juniors and seniors. Leno’s program has served as a model for other native communities wanting to establish intergenerational language immersion programs.

Leno has expanded her program to include drug and alcohol prevention activities for youths. She says the children keep her motivated: “They surprised me with their participation and how much they learned of our culture.”