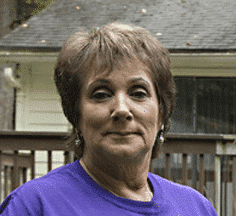 At 64, successful public relations and marketing executive Vicki Thomas knew that she was missing something from her life. It wasn’t until she saw a CNN news story in 2010 on injured Iraq veterans Dale Beatty and John Gallina that she realized what it was: a higher purpose.

Beatty and Gallina were injured when their Humvee hit two antitank mines in November 2004. Beatty was left as a double amputee while Gallina sustained back and head injuries. But their spirits remained intact as they joined together to create the nonprofit organization Purple Heart Homes in 2008 in an effort to provide greater services for veterans like themselves who have service-connected disabilities. “I remember seeing a clip of Dale playing drums in his band, and their story as combat veterans on a mission was so compelling to me. I immediately thought, ‘I have all of this experience, and I can help them. I’m going to give them a call,’” Thomas remembers.

She picked up the phone. That call changed the trajectory of Purple Heart Homes, says cofounder and executive director Gallina. In just three years, as Purple Heart Homes’ director of communications, Thomas has helped take the fledgling nonprofit to new heights. Drawing on her contacts and 35 years of experience in fundraising and marketing, Thomas has raised millions for Purple Heart Homes in financial contributions and material donations. Revenue shot up 600% in her first year with the startup. She’s developed an innovative program that matches veterans with foreclosed homes donated by banks.

“Vicki became our personal mentor and really helped us put the meat on the bones of the organization. And she did this all out of her own pocket at the beginning,” says Gallina.

Her relationship with Purple Heart Homes has also helped Thomas to deal with painful memories from her own teenage years during the Vietnam War. At school assemblies, the principal of her Wisconsin high school regularly announced the names of former students who had been killed in action. At their funerals she watched their parents sob as they received folded American flags. Raised to be patriotic, as a college student at the University of Wisconsin she’d protested the war.

But after leaving college, her focus shifted to work, and she became a successful public relations and marketing executive in New York who by 1988 had founded her own company, which she ran for more than two decades. “My life was always busy, always rich and always full,” she says. “I worked with great companies and clients, but it was always an arm’s length relationship where I was the outsider looking in. As I grew older, I realized that I was performing a function but that I was missing passion. I was contributing to someone else’s purpose, but I was missing a purpose of my own.”

Working with veterans today and making a difference in their lives has reinvigorated her sense of patriotism and allowed her to channel the pain of what she witnessed as a high school student into action.

The need in the veteran community is great. Of the 22.3 million veterans in the U.S., 3.2 million have service-connected disabilities. Upon returning from duty, many are faced with the realization that their homes are not handicap accessible. Wheelchair ramps or stair lifts become necessities, but many vets lack the funds to make the home renovations they need. Often too disabled to work and awaiting veterans’ benefits for years, many see their credit ratings plummet. Home equity loans and new mortgages become out of reach.

The innovative programs Thomas helped developed for Purple Heart Homes helped veterans young and old to live with dignity in their own homes.

The first is the Veteran Home Ownership Program. Designed by Thomas based on her experience as a former executive with the Credit Union National Association, this program leverages donations of foreclosed homes to provide affordable home ownership for young veterans.

The homes are donated by banks and cities. PHH then raises the funds to renovate a home for the individual veteran’s needs. Veterans have access to 15-year mortgages worth 50 percent of the completed appraised value of the home through Georgia’s Peach State Federal Credit Union. If they pay their mortgages on time, after five years a percentage of the equity is released up to the 15th year. By then, the veteran owns the home entirely without any debt.

She also restructured PHH’s existing initiative for older veterans, coining it the Veterans Aging in Place Program. This program takes a percentage of the mortgage money that’s repaid and uses it to fund free home modifications for older veterans who don’t qualify for assistance programs focused on recently returned veterans. The rest of the repaid mortgage funds will enable PHH to become self-sustaining within five years.

“The most important thing to remember is that this is not a handout but rather a hand up,” says Thomas. “We allow [younger veterans] to be able to make affordable payments and put them in a credit repair program. Then they have the chance to pay it forward to others.”

It’s a win-win for all generations—and communities too. It helps veterans to grow assets, towns to recoup lost taxes and neighborhoods that have struggled with foreclosures to stabilize.

That larger community healing is a key component of PHH’s mission—and some of the best evidence for Thomas’s social impact. She rallies entire communities around veterans. Hundreds of volunteers have helped renovate homes. And when a home is ready to be moved into, she organizes a welcome ceremony for the veteran attended by community members, politicians and the media.

For many, this “Mission Accomplished” celebration is the first and only welcome home they’ve received for their military service. It’s meant the world to Army Staff Sargent Sandra Lee, who suffers from a combination of post-concussive disorder and post-traumatic stress disorder. PHH has provided a community to rebuild her life for the service and sacrifices she made.

Lee returned from Iraq in 2004, surviving not only multiple IED attacks but also a sexual assault from a member of her own unit. She spent nine years moving from state to state in an effort to escape her inner demons and regain some semblance of stability.

Thomas met Lee at a Wounded Warrior’s event in 2012 and fought to make her the first female veteran approved to receive a new home under the Veteran Home Ownership Program. In July, the soft-spoken veteran received the keys to a newly renovated home in Manchester, CT. To bring the community together for a culminating event, Thomas arranged a parade, a color guard ceremony and speeches by U.S. Senator Richard Blumenthal and Connecticut Senator Steve Cassano. Thomas watched the ceremony with tears in her eyes.

“I had been let down by the system and people so many times that I was very skeptical that this would work out for me,” Lee says. “Vicki was instrumental in advocating for me, and she supported me throughout this whole emotional journey. Purple Heart Homes and Vicki, in particular, helped renew my faith in humanity.”

For Thomas, the opportunity to have social impact by helping Lee and others has provided her with new passion and meaning in her life. “I get to now see firsthand the ravages and impact of war on those that survive it,” says Thomas, who has built up PHH so significantly that she now draws a small salary. “At this stage in my life, I can take my passion for my country and what these men and women represent and inspire others. I’m in a place where I can make a difference, and that gives me great satisfaction every day.”

Symetra is a proud sponsor of the $100,000 Purpose Prize for Future Promise, recognizing an individual over age 60 whose approach for helping society has the potential to grow steadily over the next five years.