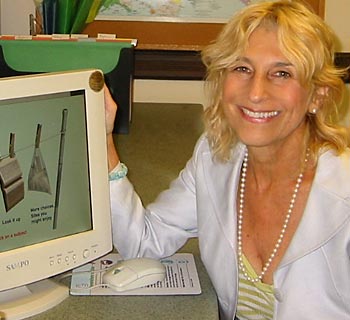 “I’m too old dear; I’m too dumb.” That’s what older people told Tobey Dichter in the late 1990’s when she asked if they were interested in the Internet. Dichter, then a vice president of a billion dollar healthcare company, was startled by the response and concerned that the oldest among us were being left out of the information revolution. So in 1999, Dichter, then 55, quit her job and created the nonprofit Generations on Line to overcome the barriers of poor access and lack of skills that seniors often face and to lessen their intimidation. Creating web-based software, a simplified interface, and large instructions in plain English on each screen, the organization guides novice elders online and provides them with a simpler email account for ease of use. Generations on Line is free to seniors and is now available in more than 1,200 libraries, senior centers, nursing homes, public housing projects, and retirement centers in 48 states. More than 25,000 older Americans and Canadians have used the service to reconnect with relatives and old friends, pursue hobbies, and regain independence; for many it is a lifeline following a stroke or other debilitation. A special Medicare tutorial enables easier access to benefits. A search in 36 languages aides immigrant populations to read news of their homelands. An intergenerational section asks elders to share with supervised fourth graders their memories of the past — from first hand accounts of the Great Depression, to family stories of the Underground Railroad, and life in the last century.