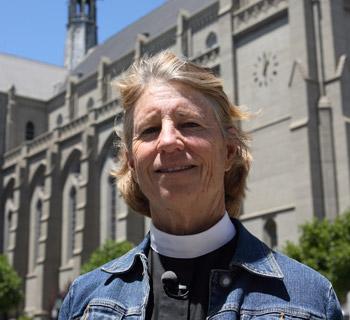 Sally Bingham, a homemaker turned Episcopal priest, developed a new strategy to combat global warming: organize churches, synagogues, Buddhist temples and mosques to buy “green” electricity generated by wind and solar power, to reduce energy consumption in their buildings, and to preach the message that as stewards of God’s creation, congregants have a religious and moral obligation to protect the environment.

In 1993, Bingham founded the Regeneration Project, a nonprofit organization that created a national Interfaith Power and Light Campaign to unite all faiths in efforts to prevent the catastrophic effects of global warming. State chapters of Interfaith Power and Light work with congregations to help them come up with ways to reduce their carbon footprint and publicize the call to combat global warming. Members pledge to give sermons about climate change, support public policy that cuts greenhouse gases, and use energy-saving technologies. So far, more than 4,000 congregations are participating in the effort in 23 states.

As a lifelong Episcopalian who grew up finding God among the oak trees of Northern California, Sally Bingham had been troubled by the silence from religious leaders about environmental threats, such as the death of coral reefs from pollution and rising sea temperatures.

“Why don’t I ever hear about the destruction of creation from the pulpit?” she recalls wondering.

So Bingham, long a stay-at-home mom in San Francisco, set out to become the person she’d been hoping to hear in church: an ordained priest with an environmental ministry. Having never gone to college – she’d married a year after high school and raised three children – Bingham enrolled at age 45 in college, graduated, and went on to seminary. In 1993, she founded the Regeneration Project to make the connection between faith, the environment, and action.

Bingham’s goals: get diverse faith communities to eliminate energy waste in their buildings, preach about climate change, and prod members to give up their oversized cars, all in the name of honoring God and saving money at the same time.

“If we say we love God, we are required to save God’s creation,” says Bingham, now 66. “How can you listen to the second commandment – which is to love your neighbor as yourself – and then pollute your neighbor’s air?”

In 2001, the Regeneration Project launched the Interfaith Power and Light Campaign, now a network of 23 affiliated state organizations involving more than 4,000 religious organizations from churches to synagogues to Buddhist temples to mosques. The nonprofit helps state chapters by providing education about energy audits, energy efficient lights and appliances, and strategies for outreach and fundraising.

Once a year, leaders from the state groups come together with the Regeneration Project staff to brainstorm about successes and challenges. Congregations also use the group’s award-winning DVD “Lighten Up!” as a tool to explain the issue of global warming, the need for a religious response, and concrete actions people can take to make a difference to help the environment.

Moving Off the Grid

The Regeneration Project’s successes are easily seen at the local level.

At St. Elizabeth’s Roman Catholic Church in Wyandotte, Michigan, a member of Michigan Interfaith Power and Light, invested $150,000 in energy upgrades, including a new boiler, window insulation, a solar hot water heater, solar panels on the roof, and a wind turbine. The solar panels and the turbine now supply up to 35 percent of the church’s energy needs.

“My church is partially off the grid,” says Father Charles Morris, the pastor there. As a result, St. Elizabeth’s saves $20,000 a year – a 50-percent reduction in the church’s annual energy bill.

Morris also urges church-goers to adopt energy conservation at home, by stressing the moral obligation to care for what God created. But, if his members are more interested in the cash savings, he’ll go with that approach. “I feel like the Fuller Brush salesman,” Morris says. “If that’s where they’re at, let’s talk.”

The result: annual energy cost savings of $17,000, and an annual reduction in carbon dioxide, nitrous oxide, and sulfur dioxide emissions by 94,000 pounds.

“God asks us to do things in ways that are faithful and responsible,” says Tom Nutt-Powell, a member of All Saints and a co-founder of Massachusetts Interfaith Power and Light. “Practical actions are how we pray.”

Education is a key part of the mission of the Regeneration Project. In 2006, Bingham arranged with Paramount Pictures to screen the global warming documentary An Inconvenient Truth. By November 2006, more than 500,000 people in 4,000 congregations across the country had seen the film. “We had 150,000 surveys returned to us, with notes of congratulations and thanks,” Bingham says.

That reception differs markedly from the ones Bingham got in the 1990s, when she’d travel to the San Francisco suburbs to talk about global warming and find scant audiences of 15 church goers. After one presentation, a parishioner stood up and challenged the truth of global warming and the need for conservation.

“He said, ‘If you listen to this little lady we’ll be washing our clothes on boards and riding in a horse and buggy,'” Bingham says. “Now when I go to a congregation, 300 people show up and cheer.”

Still, Bingham is keenly aware that the process of changing individual behavior can be slow. “Wherever you are in your environmental stewardship journey, we’ve been there – and can help light the way (with CFLs, of course!),” reads the newsletter for Massachusetts Interfaith Power and Light.

One parishioner at Grace Cathedral, the Episcopal Church in San Francisco where Bingham serves as minister to the environment, walked out during an Earth Day sermon that urged members to give up their large sports utility vehicles and drive energy efficient cars. But this same parishioner came up to Bingham six months later, she recalls.

“He told me, ‘I don’t drive my SUV everyday. It stays in the garage except when we go to the mountains. I’ve got a Volkswagen,'” Bingham says.

Bingham drives a Toyota Prius hybrid, of course. “I’ve sold more cars than Toyota,” she jokes. On the back of her car, a sticker reads: “Powered by God and Clean Energy.”

In the fall of 2006, the Regeneration Project brought together Muslim, Jewish and Christian leaders for a summit about the reality of global warming and the imperative for a religious response. As a result, in May 2007 leaders of the National Council of Churches, the Islamic Society of North America, the Alliance of Baptists, and the Religious Action Center of Reform Judaism signed an open letter to President George Bush and members of Congress calling for legislation to limit greenhouse gas emissions.

“We are mobilizing a religious force that will persuade our legislators to take immediate action to curb greenhouse gases,” they wrote. “We believe that placing science-based, mandatory limits on greenhouse emissions is one of the most effective ways to reverse the warming trend.”

Even as the Regeneration Project deals with politics and national summit meetings, Bingham understands that the work always comes back to the individual.

“What I focus on in my ministry is that every single one of our behaviors counts,” she says. “The electricity we’re using, the coffee we’re drinking, the car we’re driving. At the deepest level,” she says, “we matter, and our behavior matters.”