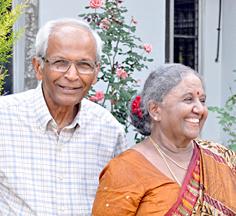 The Ramakrishnas founded a residential school for impoverished girls in Bangalore, India.

T.V. and Vijaya Ramakrishna had successful careers in the U.S. for decades, he as an engineer and she as a businesswoman. But as they approached retirement, neither forgot the challenges they faced growing up in India. T.V. lived in deep poverty. Education had been his ticket out. Vijaya hadn’t been poor, but her father’s bias against educating girls kept her out of college. They knew that poverty and discrimination are still the norm for millions of children in India.

They felt called to do something about it in the second stage of life. “It was important to us to make this stage of our lives meaningful and purpose-driven,” T.V. says. “We chose to pay forward the gift of education—the gift that had allowed us to fully experience the world.”

In 1998 the Ramakrishnas launched encore careers as the founders of the Sahasra Deepika Institute (“a thousand lights”), a K-10 residential school for underprivileged children in Bangalore. Today, the campus is home to 60 disadvantaged girls who attend school for free alongside tuition-paying middle class students. Since 1998, 152 children have lived on the four-acre campus, and 17 are currently enrolled in college.

“Improving the conditions of the lives of these neglected children is a major challenge of our times,” T.V. says of his encore career. “Governments alone cannot solve these problems. Thousands of caring citizens must get off the sidelines and get on the playing field to provide opportunities to these children.”