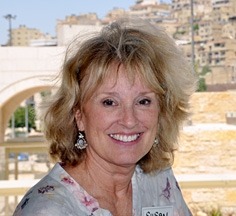 Susan Anderson was a chemist, a housewife, and an artist and arts marketer until 12 years ago, when a trip to Bosnia changed her life. For the first time, she witnessed the destructive effects of war on children and adults firsthand.

“Slowly I closed down my company to pursue a new nonprofit venture that gave greater satisfaction to my life,” she says. In 1999 she founded The ArtReach Foundation Inc., which uses art therapy to help children and adults recover from trauma caused by war, violence and natural disaster.

ArtReach brings drama, movement, music, writing and visual art into schools and communities so children and adults can express themselves creatively, and in the process recover from trauma. The innovative model Anderson developed aims to cultivate creativity, hope and resilience in the participants without forcing them to retell the actual traumatic events.

Bosnia’s Ministry of Education estimates that thousands of children benefited from ArtReach’s programs in the five years the organization operated in that country. Since then ArtReach has expanded to Lebanon, Jordan and the United States, where it helped Hurricane Katrina evacuees in Arkansas and Georgia.

In 2009, Anderson initiated Project America to bring art therapy workshops to war-affected U.S. military personnel, their families and health providers dealing with post-traumatic stress disorder. In February 2011, she partnered with the Georgia Tech Research Institute to study the ArtReach model’s impact before launching a national training institute in Atlanta. Anderson plans to expand Project America to all 50 states and further develop the ArtReach Middle East Institute in Amman, Jordan.

2015 Update: Since 2009, Project America has served 750 participants through a veteran peer-training program. Since 2014, the ArtReach focus has been on displaced earthquake refugees in Haiti, as well as others who have escaped violence.