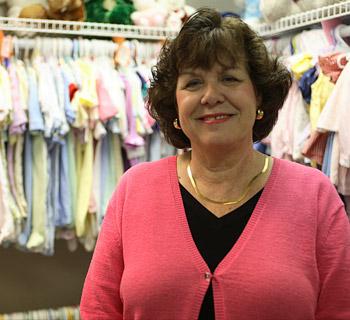 Saving the lives of newborns through nurse home visits.

After 16 years as a neo-natal nurse in St. Louis watching too many newborns leave the hospital, then return with life-threatening medical conditions, Sharon Rohrbach knew it was time to take action. In 1992, she founded the Nurses for Newborns Foundation to bring experienced nurses into the homes of mothers whose socio-economic, personal or health status put their infants at high risk. It’s a low-tech, low-cost, high-impact way to reduce infant mortality, prevent child abuse and neglect, strengthen families, and reduce costs to society. Nurses administer skilled care and provide parenting education, injury prevention strategies and emotional support, along with basic supplies – food, blankets, diapers, clothing, and personal care items. Nurses are available to families 24/7 for two years. The results speak to the power of the program: significant improvements in child and parent health outcomes, no reported cases of abuse or neglect, fewer injuries, fewer repeat pregnancies and higher infant immunization rates. In 2006, the program reached more than 5,300 children in more than 40 counties in Missouri and Tennessee.

The United States ranks 42nd in infant mortality in the world, behind every other industrialized nation. In St. Louis, there are some zip codes where the infant mortality rate is more than double the national rate of 6.4 deaths per 1,000 births. And African American babies in the city are more than twice as likely to die as white babies.

The problem became a “soul-searing” personal one for Sharon Rohrbach, a critical care nurse in a St. Louis hospital. In the 1980s, she saw increasing numbers of babies die in their mothers’ arms “from something that you know could have been prevented.”

Rohrbach blamed the increase in infant deaths on new insurance policies that had the effect of cutting hospital stays for new moms from three days to one. She assumed that babies were going home too soon, before symptoms of life-threatening illnesses became obvious.

Rohrbach was wrong. When she went into the homes of dozens of St. Louis newborns to see for herself, she saw that the escalating rates of infant mortality had more to do with the “coincidental problems that come along with poverty” than with curtailed hospital stays.

“There was no food. They didn’t have a bed. There were no diapers. There was domestic violence and drugs,” Rohrbach says. And many of the mothers had emotional and psychological disabilities caused or accompanied by a history of abuse.

In 1989, Rohrbach launched a fledgling project out of a tiny hallway in her home. By 1992, she had created the nonprofit Nurses for Newborns Foundation. Her goal was to save lives by bringing registered, experienced nurses into the homes of families with newborns most at risk for poor health outcomes – often young, single, uninsured mothers living in poverty and dealing with high-needs infants.

Nurses for Newborns has come a long way since then. The organization now employs 70 people, deploys 1,200 volunteers, and operates out of a 9,300-square-foot office space.

But there are much more important numbers that document the progress of the now 15-year-old nonprofit. For infants and mothers completing Rohrbach’s program in 2006,
Not one of the infants visited by Nurses to Newborns had a substantiated report of abuse or neglect during the first year of life.

Almost none – just 1 percent – of infants were re-hospitalized for preventable causes.

Almost none – just 2 percent – of infants sustained injuries from a household safety hazard.

Nearly all – 95 percent – of teen mothers avoided a repeat pregnancy in the two years since their last birth.

Nearly all – 90 percent – of mothers had their infants completely immunized by the time they were six months old.

The impact is clear but the need for services is, unfortunately, not declining. Over the past three years, Nurses for Newborns Foundation has operated in 29 Missouri counties, plus another 30 in Tennessee. In 2005, the organization received 3,500 referrals; in 2006, more than 5,300.

Erika is two years old now and thriving, but at six months she weighed just 10 pounds, lost her hair, and couldn’t keep food down. She had been born in poverty to an emotionally unstable single mom who neglected to feed and care for her but retained custody.

“God brought us Linda,” she says.

The Foundation gets its referrals from every hospital that delivers babies in the counties that they serve and another 160 community agencies such as homeless shelters and the Division of Family Services. About 20 percent of calls come from pregnant and parenting women themselves.

When called to help newborns – and others struggling within the first two years of life – Nurses to Newborns provide a wide range of services, including medical care, parenting education, injury prevention strategies, and emotional support.

Nurses also help provide basic items – formula, blankets, diapers, clothing, and personal care products. They remain on call 24/7 to handle crises, all with no charge to the families served. Once the children turn two, the nurses help find additional support services for the families.

In addition, the organization screens all mothers for depression. Research indicates that mothers who suffer from depression are more likely to abuse their children and that children born of depressed mothers are more likely to have emotional and behavioral problems. Early identification of maternal depression can reduce the potential for a negative impact on both mother and child.

Nurses to Newborns receives operating funds from a variety of sources, including contracts with the state, United Way funds, donations and grants.

Melanie Lutenbacher, associate professor of nursing at Vanderbilt, is a big fan of the program. “I was so taken by what Sharon had done and her passion for mothers and babies. Nurses to Newborns isn’t a handout. It’s an empowerment program.”

Rohrbach believes there’s no way to understand poverty unless you see it firsthand. “When I was 16, I delivered a food basket to a teen in labor who had no food. I sat and timed contractions with her. Here was someone my age who had nothing to eat, and I saw how much that food meant to her. That memory has stayed with me forever.”

For the past decade, Rohrbach has arranged for nursing, medical and law students from nearby universities to accompany nurses’ home visits. “I hope they will remember the experience when they rise to places of power and influence in their professional lives,” she says. “I think our most important contribution to society is showing upper level society what it’s actually like to be poor. Most have no idea.”

Community leaders who make home visits invariably become committed to the program, serving on the Nurses to Newborns Foundation board of directors, making contributions, and influencing outcomes. One lawyer volunteered his time to help remove a child from a deadly home environment.

Media outreach, education, political savvy, and Rohrbach’s mantra — “improvise, overcome and adapt” – have attracted 9,000 donors, plus bi-partisan political support and diversified funding sources “so that if one dries up, the program can continue.”

Rohrbach turns 65 this fall, and she’s more focused than ever. “My goal is to expand Nurses for Newborns services nationally because they save babies’ lives,” she says. “I’m worried that I’m running out of time.”