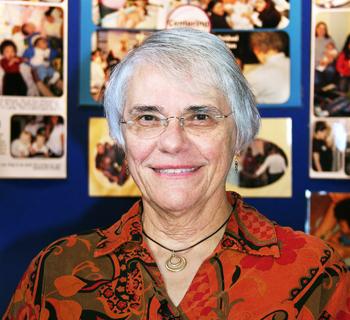 What difference would it make if pregnant women spent nearly two hours for routine visits with their obstetrician, midwife or nurse instead of 15 minutes? And what if they met with and learned from other pregnant women at the same time? After 27 years as a nurse-midwife, Sharon Rising recognized that meeting in groups could increase personal empowerment and save lives. She knew preterm birth was – and is – the top killer of newborns in the U.S. She also knew that too many pregnant women, insured or not, don’t have enough time with clinicians in brief office visits to fully discuss pregnancy, parenting, emotional health and other family issues.

In 1993, Rising brought together groups of eight to 12 women of similar gestation for two-hour sessions over the course of their pregnancies, providing prenatal care, involving women in self-care, and facilitating an open discussion about issues of importance to the women. Patients and health providers immediately reported improved satisfaction and outcomes – for the same price as the traditional model. A recent randomized patient study credited her “CenteringPregnancy” model with a 33 percent drop in preterm births compared to the traditional system. Rising’s model has been adopted nationwide, and now she trains other caregivers in providing group care.

As the years passed, Sharon Rising, a registered nurse-midwife in Waterbury, Connecticut, got more and more frustrated. She saw pregnant women wait for hours in crowded rooms. She had to rush them through their exams, then rush on to other patients. She rarely had time to answer questions from her patients, whether insured or uninsured, teenagers or 40-year-olds, college graduates or high school dropouts. And all the women she saw were isolated from the kind of support that traditional extended families gave expectant mothers in the past.

In 1993, after 27 years as a nurse-midwife, Rising took action. She convinced a clinic in Waterbury to set up a 90-minute appointment, during which a group of eight pregnant women would meet with one doctor, instead of having each woman meet alone with a doctor for 10 minutes.

Most pregnant women, Rising believes, want and need to be together. “They’re under tremendous stress,” she says, “nervous about the pregnancy, concerned about their jobs, worried about money, questioning their partners’ commitment. What happens in a group is powerful. You find that everyone feels the same way, and the women become invested in each other and in the success of every other woman in the group.”

She did away with exam rooms, holding sessions in a circle. “Pregnant women aren’t sick, so they don’t belong in exam rooms,” she declares. And she turned over responsibility for keeping track of weight and blood pressure to the women themselves, arguing that “direct involvement in their care leads them to take more responsibility for their health.”

The group atmosphere and increased time with a midwife, RN, or doctor had an astonishing impact on preterm births. Prematurity is the number-one killer of newborns in the United States, and little is known about how to prevent it. But a study of more than 1,000 women showed a stunning 33 percent drop in the rate of preterm birth for women in Centering groups, compared to those in traditional care.

Other research showed that even women in Centering groups who delivered prematurely had pregnancies that were two weeks longer than those in traditional care and babies that were one pound heavier. That’s not much if you’re weighing apples, but for a tiny preterm newborn not yet ready for the world, it can make the difference between a healthy infancy and death or disability.

“This model has revolutionized prenatal care,” says Carrie Klima, CNM, Ph.D., a clinical associate professor at the University of Illinois-Chicago College of Nursing, who has led Centering groups since 1998. “Traditional care doesn’t always respond to the needs of the woman, but Centering does.”

Testimonials from new moms aren’t hard to come by. “What I like most is talking with others and hearing their experiences,” said Janiece Nelson, 27. “Also, some women ask questions that you were afraid to ask or that you forgot to, but now you have the answers, too.”

Nelson knows from her four childbirths the difference group care makes. The Chicago resident had traditional prenatal care for her first child, who is now four years old, then joined Centering groups for the middle two.

“I hated it that I wasn’t in a group this last time,” Nelson says. “With regular care you see your doctor for maybe 20 minutes and sometimes not even that long. With Centering you have an hour and half or more to talk. And after the babies are born, we check on each other to make sure everything’s okay. It’s kind of like family.”

Rising has a long history of bucking the system. After finishing basic nursing courses, she went to the Yale School of Nursing for training in maternal and newborn health, but opted out of the second-year rotation in the traditional childbirth classes. They weren’t meaningful, she decided. She developed an alternative program allowing her to talk to women in the prenatal clinic as they waited for their exams.

She taught at Yale’s Nurse Midwifery Program for five years, chairing the department in her final year, before moving to Minnesota and then to Connecticut with her husband and small children. Unable to get midwifery privileges at a local hospital hostile to the very idea of midwifery, she provided routine prenatal care in a clinic and for an obstetrician in private practice.

One hospital obstetrician was willing to take a chance on her unconventional plan. She started with three groups and soon had three more. “We ended up with 13 groups, three of them for pregnant teens.” The concept was so popular that Rising introduced group care to the clinic, the private office, and a local health center.

Now pregnant woman throughout the country are increasingly offered the choice of traditional care or a Centering group if one is available locally. Groups are sponsored by a health agency such as a private medical practice, community health center or clinic, and each is led by a health professional. If a woman chooses Centering, she joins eight to 12 others at a similar stage of pregnancy for 10 sessions that last for 90 minutes each. Partners are invited to accompany the women.

“A middle-aged male obstetrician once said to me, ‘It’s terrifying to think about sitting with a group of women and talking.’ But women need to talk when they’re pregnant,” Rising says. “They need to discuss what it means to have a baby, to be a mother, to deal with the stresses of pregnancy, to confront relationship issues. All these things are part of their lives.”

Five years after Rising’s initial idea, she retired from clinical practice to focus on leading training workshops for group leaders in what she has trademarked as CenteringPregnancy™. More than 255 workshops have been held, and nearly all states have at least one CenteringPregnancy™ site. The Indian Health Service and the military have adopted the model. CenteringPregnancy™ materials have been translated into several languages, and thousands of women have attended.

Rising devotes her time to running the nonprofit Centering Healthcare Institute. She is working on groups for moms and babies, called CenteringParenting™, and hopes to create Centering groups throughout the lifespan so that women going through menopause or diabetes have a safe place to ask questions and learn from each other.

“With age I’ve come to realize that I don’t have the answers that can fix women’s lives. I can only offer to share what I know and pass on the wisdom that comes with experience.”