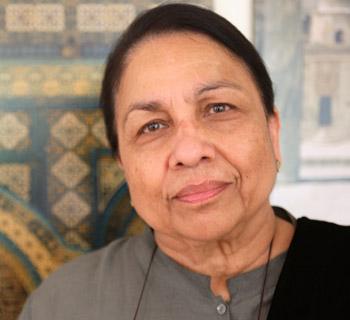 Shakeela Hassan, a University of Chicago’s Professor Emeritus of Anesthesiology and Critical care has made a life long commitment to promoting peaceful coexistence and understanding among different faith communities. She is active in Chicago’s Islamic Foundation and serves as a liaison for the Muslim community to the Archdiocese of Chicago. She serves on the Boards of International Human Right’s Law Institute, Catholic Theological Union, Chicago Theological Seminary, Karamah: Muslim Women Lawyers for Human rights, International Museum of Muslim Culture and Hands of Peace, an exchange program for Israeli-Palestinian youth. In 1999 at age 66, Hassan left her work and position at the University of Chicago Hospitals and turned to documentary films as catalyst for unity and interfaith understanding. Her grassroots fundraising effort for PBS Documentary: Muhammad: Legacy of a Prophet made its National PBS Broadcast in 2002. She was co-executive producer of “Ties That Bind” which aired on WTTW in 2004. In partnership with noted journalist Bill Kurtis, Hassan’s Harran Productions Foundation is now producing “The Sounds of Faith”, a three-part series exploring the connections between the sacred sounds and music of Judaism, Christianity and Islam for a National PBS Broadcast. Promising to be a unique journey of “sound experiences” of the Abrahamic Faiths, the series will compel each faith constituent to act peacefully and justly with the other.