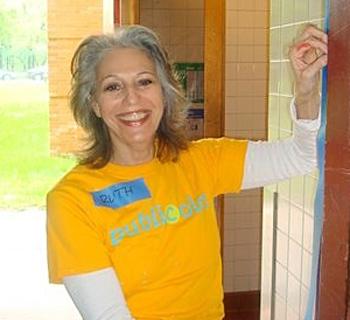 Professing that colorful environments can transform attitudes and behavior, Shuman develops programs in which public school students colorfully paint the common areas in their inner-city schools, learning a marketable skill.

In early 1994, Shuman visited an arts-in-education program in several public schools in Harlem, a predominantly low-income neighborhood in New York City. “I was appalled at how these schools appeared,” she recalls. “They were colorless, lifeless, and hostile-looking, and it was clear that these negative environments were contributing to the soaring dropout rate.” That year, Shuman founded Publicolor, which runs a continuum of after-school programs through which middle and high school students paint their school’s public spaces with warm, inviting colors. These at-risk students then move through youth development programs that help them envision, plan and prepare for college. Shuman works with principals to find students whose self-worth has been shattered by failure and who are at high risk of dropping out. The organization reports that it directly engages more than 1,400 students yearly. Last school year, 86 percent of the high school seniors enrolled in Publicolor graduated in four years, compared with 42 percent of their classmates. Meanwhile, 100 percent of Publicolor’s graduates advanced to college; all were the first in their families to reach that level of education. Shuman, 65, hopes to bring Publicolor to other cities with struggling school systems.