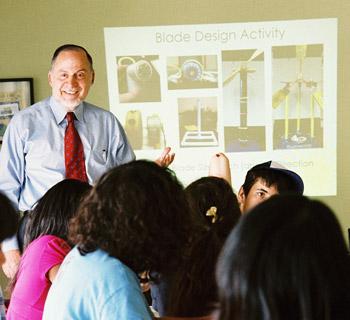 Richard Cherry sees opportunities where others see smokestacks and landfills. In 1994, after two decades with the New York Urban Coalition, Cherry founded the Community Environmental Center to help low-income New Yorkers save money on utility bills by adding insulation, weatherizing, and installing more efficient appliances. Today, the Community Environmental Center has become the state’s largest nonprofit energy conservation organization and the city’s only nonprofit eco-business. The Center now runs an array of initiatives, including consulting services for developers who want to put up energy-efficient buildings, a program to salvage building materials for reuse instead of adding to landfills, and education efforts that teach children about conservation in a solar-powered building. In his role as an eco-entrepreneur, Cherry has aggressively promoted activities that not only help New York’s disadvantaged communities but also raise environmental awareness across generations.

Richard Cherry’s original plan was simple enough: help New Yorkers on limited budgets save money on utility bills. The work, funded by a government weatherization program, would help people who badly needed it get some extra cash at the end of the month. Today, Cherry is an eco-entrepreneur, and the Community Environmental Center he founded in 1994 is the state’s largest nonprofit energy conservation organization and the city’s only nonprofit eco-business.

The Center provides a comprehensive menu of services for homeowners, building owners, government officials and professionals interested in energy efficiency or sustainable buildings, including:

The Center sweats the small stuff, while keeping the big picture in mind. Last year, the Center’s staff installed fixtures for compact fluorescent bulbs, replaced energy-devouring older refrigerators with energy-efficient models, weatherized windows and doors, and installed energy-efficient heating systems and insulation in 8,000 homes, nearly all affordable housing units. The work cut the amount of carbon dioxide dumped into the atmosphere by 10,000 tons annually – the equivalent of planting more than 2,600 acres of trees a year to help scrub the air clean.

The Center also provided technical assistance to the City in converting a 25-unit Bronx apartment building into a showcase for green technology. Renovated from an empty shell, the building will contain high-efficiency condensing boilers and other measures that will cut energy and water consumption by one-third compared with other city-owned buildings.

Roots in the Trade

Cherry’s grandfather, a Russian immigrant, learned English from a plumbing manual and became a plumber. His father, who trained as an accountant, became an expert in heating systems.

“I find it eerie that I trained as a lawyer and here I am dealing with heating systems and plumbing” he says. “Isn’t that something!?”

Rick Cherry’s career started at a large corporate law firm, but soon left Wall Street to join the staff of the New York Urban Coalition. He spent 20 years there, much of the time running the Coalition’s housing program.

When Cherry was in his early 50s, the Coalition board decided to dissolve the organization, and he was out of a job. “I had to decide what to do with my life,” he says. “It was a tough time for me.”

At the suggestion of a friend, Cherry started the Center as an outlet for his passion to improve living conditions for New York’s low-income residents.

In 2002, the Center won a city contract to build an environmental education center in Manhattan. A year later, Cherry and his staff created a related nonprofit, Solar One, the city’s first solar-powered arts and education center.

“The city wanted a not-for-profit group to develop and manage a model of sustainable urban development in Stuyvesant Cove Park,” Cherry says. “Several museums decided against it because they had capital needs of their own. We took it on.” The building was an Earth Day demonstration structure erected by architects who donated it to the Center.

More than 8,000 students throughout the City have attended presentations on energy conservation at the facility. Solar One also runs CitySol, a clean-energy festival series where people rock along with bands that perform on a solar- and biodiesel-powered stage, itself a former catwalk recycled from a Tommy Hilfiger fashion show.

Plans are currently underway for replacing Solar One with Solar Two, which would be the first building in the City to generate more energy than it consumes. Solar Two will continue to run Solar One’s programs including the Green Renter lecture series — featuring subjects relevant to city life, such as green investing, recycling, and how to purchase wind power – and its eco-apartment will show people what they can do in their own homes to lead more eco-friendly lives.

Waste Not, Want Not

A few years ago, Cherry learned about deconstruction, a way to salvage worthwhile material from demolished buildings rather than dumping it in a landfill. He saw an opportunity to expand the Center’s environmental impact and revenue stream at the same time.

“There was nothing like it in the city, and people here knew I was interested,” Cherry says. “Then a major developer told me they needed some buildings taken down, and if I found warehouse space for the salvage I could do the job.” Cherry found the space.

Since early 2005, when Cherry created Build It Green!, the enterprise has kept 450 tons of building material out of landfills and sold it well below retail cost to homeowners, landlords fixing up apartments, and families restoring older homes. Set designers and movie and television producers come to the warehouse as both customers and suppliers.

Recently, someone donated two kitchens, unused and still in their crates, each worth $70,000. “Because so many people wanted them, we ran our first Internet auction. We made a lot of money,” Cherry says, “and it was Build It Green’s greatest coup. So now we’ll start calling property managers and kitchen designers to tell them we’re interested in any high-end kitchens being replaced.”

In the 13 years since founding the Center, and in particular since seeing Al Gore’s An Inconvenient Truth, Cherry has broadened his views and his organization’s mission.

“I originally thought that we were only helping to make homes more affordable for people without much money,” he says. “I never thought of it in the context of climate change.

“As I’ve grown older, I’ve come to realize that it’s not wrong to say that we all have a moral duty to save the earth,” Cherry adds. “That’s something new for me. I’m trained as a lawyer and I explain things like a lawyer, but I’ve discovered along the way that it’s okay not to be embarrassed about sometimes being a preacher.”

People often ask Cherry, who’s approaching 65, if he’s going to retire soon. He shakes his head and focuses on the next challenge — transforming the Center from a company that depends on government contracts into a self-sustaining business.

“We’re in business to make sure we improve the environment,” Cherry says, “and we want to stay in business. But, in the end, I want to leave a business that has more to it than a financial bottom line. I want it to have a soul.”