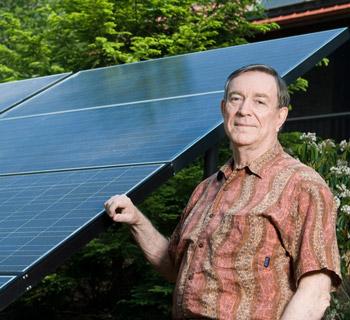 Leading the business community by adopting practices for his own multi-million dollar carpet company that protect the environment and boost profits.

Ray Anderson had an epiphany at age 60 that changed his life, the future of his billion dollar carpet company, and the environmental futures of hundreds of other companies as well.

Today, Interface, on its quest for “Mission Zero,” has reduced emissions by 60 percent in absolute tonnage, drastically cut energy and water use, sharply scaled back the amount of waste products it sends to landfills, dramatically boosted the amount of carpet products it recycles – and raised profits at the same time. Anderson now tours the country, giving speeches to audiences of executives, urging them to follow his lead. Today, major firms – including Wal-Mart and Boeing – come to Interface for advice on improving their environmental practices.

Thirteen years ago, Ray C. Anderson, the founder, CEO, and chairman of Interface Inc., the world’s leading producer of modular carpet tiles, happened on a cause. Then 60 and contemplating his own future in the company, Anderson was asked to outline Interface’s environmental vision in a speech to a staff task force. “I didn’t have an environmental vision,” he says now.

On the very day that Anderson began to draft something that might pass muster, environmentalist-businessman Paul Hawken’s book, The Ecology of Commerce, serendipitously landed on his desk. In the hard-hitting book, Hawken states industry’s stark choice: to destroy the planet with pollution or lead the way to an environmentally responsible – and profitable – future.

“Hawken’s message was like a spear in the chest,” Anderson says. “It was eye-opening, mind-shifting, an epiphany. I had an environmental awakening and had a new purpose for myself and for my company – for Interface to lead the industrial world toward sustainability.”

Anderson gave the speech to his staff, publicly condemning himself as a “plunderer” of the earth. He challenged employees of his billion dollar company to make the firm a leader in the environmental movement.

“We made a whole-hearted commitment to sustainability and to proving it is a better way to run a company,” he says.

By 2020, Anderson expects Interface to reduce its environmental footprint to zero – he calls the campaign “Mission Zero” – and then to move beyond sustainability to restoration of the earth. To achieve the goal, Interface has been recycling old carpeting to reduce landfill need, using solar and wind power in place of fossil fuels to reduce emissions, and even finding alternative materials, such as corn-based polymers instead of oil-based ones, to produce carpeting.

Today, Interface is about 45 percent of the way to its goal, Anderson says. The firm, headquartered in Atlanta with factories worldwide, has reduced greenhouse gas emissions by 60 percent in absolute tonnage. Many of its operations run on renewable energy sources such as wind and solar.

Since kicking off the campaign, Interface has lowered water consumption by 80% in its modular carpet facilities, and 69% in its broadloom facilities, has diverted 103 million pounds of materials from landfills through its product reclaim program ReEntry, and has reduced energy consumption in its carpet facilities by 45% while increasing the percentage of renewable energy to 16% worldwide.

“From the first moment, it was about doing the right thing,” Anderson says. “I mean, if you think you are going to face your maker some day, you can’t really expect to be talking about shareholder value. There has to be something more important, some higher purpose.”

Balancing Business and the Environment

Anderson knew that for his environmental vision to succeed, Interface also would have to thrive as a business – and it has. Interface continues to be the industry leader in modular carpeting, and its stock price soared from $2 to more than $18 a share between 2000 and mid 2007. Sales are more than $1 billion per year.

More and more, customers – corporate executives and their architects and designers – want to know if their suppliers have a green vision. A Japanese firm recently ordered 60,000 square yards of carpet to outfit a new office building after an influential employer heard Anderson speak and leaned on her CEO to buy only from Interface.

Anderson recently stepped down as Interface’s CEO. But he remains chair of the board. Instead of running the company, he spends time educating officials of other companies – including Wal-Mart and Boeing – about sustainability, giving about 100 speeches a year. The money he gets for the speeches goes to a company foundation that funds environmental projects in schools.

Wal-Mart’s Andrew Ruben says the retailing giant was inspired by Anderson to make a massive commitment to sustainability. After hearing a talk by Anderson in 2005, a number of top Wal-Mart executives went to Interface’s plant in LaGrange, Georgia, to see first-hand what the carpet company was doing.

“That was the moment for me,” says Ruben, now Wal-Mart’s vice president for strategy and sustainability. “It changed my life and changed where Wal-Mart was heading.”

Ruben says he and the other executives were especially impressed when they talked to employees on the factory floor. “There are very few businesses in the world where you can walk in at any level of the company and ask the employees what the company means to them, and they’ll tell you something personal,” he says. “That was a real turning point.”

The visit inspired Wal-Mart’s Personal Sustainability Project, a company-wide effort to ask individual employees to make environmental changes in their own lives. “Everything we’re doing, Ray Anderson is right in the middle of it,” Ruben says. “He remains an inspiration.”

Ray Anderson has also been an inspiration to Alan Anderson (no relation), Boeing’s chief engineer responsible for airplane interiors. “We recognized Ray as a pretty hard-nosed businessman who understood the need to make a change in his business to help make a change in the world without sacrificing anything to his bottom line,” Alan Anderson recalls. “He appeared to be a fierce competitor and a visionary, which means a lot more than a consultant giving me advice.”

About a year ago, the two companies entered into an agreement for a pilot project to develop sustainable carpeting for airplanes. Since airplane carpeting is replaced every six months, “we want to produce it through sustainable methods and recycle 100 percent of it,” Alan Anderson says.

Last year, Interface established a consulting business, InterfaceRAISE, to assist other companies’ sustainability efforts. The for-profit entity has earned about $400,000 in revenues to date.

Seeing Green around the Bend

Interface employees share Anderson’s vision. “It’s more than just throwing the trash in the right bin,” says John Bradford, vice president of research and development. “It’s a passion that burns within me. Ray’s a visionary. This is the new industrial revolution.”

“We feel like we’re saving the earth,” says Darrell Heard, 37, a machine operator who has worked at Interface’s LaGrange plant for 12 years. “We’re giving our kids a chance. It’s a great thing. We don’t just make carpet. We have a vision. I love it.”

Anderson reminded workers that he’d “gone around the bend” once before in successfully betting the company’s future on modular carpet tiles. “I told them we had done pretty well with that, but that it was just the warm-up. Sustainability is the main event.”