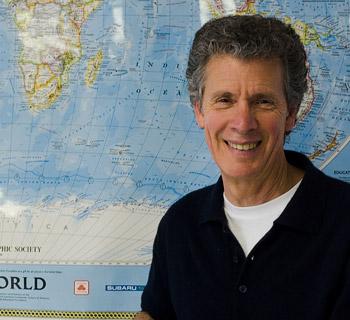 Utilizing stories, pictures and technology — podcasting, videoconferencing and the Web — to expand cross-cultural understanding among youth around the world.

At the age of 45, Phil Borges left a successful orthodontic practice and declared himself a full-time photographer. At 58 and at the peak of international acclaim, Borges turned his talent to a more purposeful passion — expanding children’s worldview and cultural knowledge.

In 2001, Borges created Bridges to Understanding to get middle and high school students worldwide talking to and understanding each other. His tools: interactive technology, photography, storytelling, and travel. His message: “Interaction is the path to understanding and empathy.” Students communicate by e-mail, podcasting, videoconferencing and even in-person visits to each others’ schools. Since its inception, 4,000 students in 30 countries have worked on Bridges to Understanding projects, exchanging stories about everything from families to child labor, water pollution to housing for orphans. The program now routinely pairs U.S. schools with schools in Africa, Asia, and Central and South America.

In 1991, Phil Borges, an orthodontist turned award-winning photographer, was asked to record the life of the Mad Pac, a group of Seattle teen age kids deemed at-risk.

“They called me Click,” he says. “I could relate to them. I knew what it was like to be in trouble.” Borges’s father died when he was young. His mother raised him alone, in a rough San Francisco neighborhood.

Working with the gang members, Borges says, “I had an idea. The best way to show others these kids’ lives was to put a camera in their hands, not mine.”

So Borges taught them how to shoot…with film. How to document their families, their friends, their fears. And a new phase of Borges’s life clicked open, too. If this project could save a street kid in Seattle, he wondered, what if he put cameras in the hands of youth around the world? Could we, like the Dalai Lama preaches, “treat our enemies as precious jewels” if we could only see and hear their stories?

There were many life-altering “clicks” that led Borges to found Bridges to Understanding in 2001, a nonprofit that nurtures global dialogue and youth leadership through photography and the tools of digital storytelling.

The Mad Pac gang project was certainly a click. Candid photos of the gangs’ family and community life turned into a major exhibit that hung in a local museum, adorned with the boys’ own graffiti. Impressed by the graffiti artistry, one viewer hired the boys to decorate a fashion show set in Las Vegas, and Borges used the funds to create a scholarship fund to send some of them to art school.

“Those kids responded to Phil,” says Christine Stickler, then executive director of the Seattle Youth Involvement Network. “The kids were asked to talk about their exhibit at other schools and consequently were hired to photograph some school projects,” she adds. “He got them to be proud of themselves and be respected by other kids their age.”

At the age of 45, Borges took a leap of faith and, after a community college class, left dentistry, moved to Seattle and declared himself a full-time photographer.

With gear strapped to his back, he traveled Afghanistan, Ethiopia and Bangladesh. “When I’d arrive in villages, the first ones I’d meet would be the kids,” he says. “When I got to a village, I’d take Polaroid pictures of the children. It was probably the first time they’d seen a photo of themselves. They’d scream and rush into their homes to show their parents, then come out with big smiles. We bonded easily.”

Four books of his portraits have been published and his work hangs in galleries across the nation. He founded two nonprofits prior to Bridges to Understanding, all benefiting endangered kids, environments and cultures.

Bridges to Understanding provides cameras and training to students around the United States and the world to help them tell their stories. In one such video, Diego, a 19-year-old Guatemalan tells his story to students in the United States in Spanish and through subtitles. Viewers hear the sound of thunder. They see photos of the devastation that Hurricane Stan wrought on his village, then share Diego’s relief when he finds his family alive. Our hope for the future is education, Diego concludes. It’s the only way his people will pull out of poverty, he says.

Stories produced with help from Bridges to Understanding now reach thousands of middle and high school students worldwide. Students like Diego learn technical skills, produce, then showcase their work on the web. Then peers in other countries interact through emails, video conferencing and their own photo production.

Thanks to Borges’ vision, students in more than 30 classrooms in Alaska, Arizona, Florida, New Mexico, and Washington have reached out to peers in Africa, South America, Latin America and Asia. Student projects archived on www.bridgesweb.org delve into tough societal issues – the pollution of Washington’s Puget Sound, child labor in Kenya, orphanages in India – and personal ones, like the story of the teen in Tucson who uses music to deal with his parents’ alcoholism.

Encouraged by the success of these projects, Bridges to Understanding is restructuring for greater impact. Rather than work on a project basis, it will focus on sustained, ongoing relationships with key international schools. “Bridges is evolving into a more systemic program,” says Greg Tuke, Bridges’ Executive Director and expert in international education. The cross-cultural exchange will be even richer, he says, because now students now will visit, as well as communicate.

Working with a skeletal staff, contributions from Microsoft, Canon, Adobe, Getty Images and others, and an army of determined volunteers, Bridges plans to add 10 overseas partner schools in the next five years, even crossing barriers into Israel and Palestine.

The first interchange in the enhanced Bridges program occurred in May. Students from Hector Peterson Senior Secondary near Cape Town, in one of the poorest townships in South Africa, visited Seattle for a photography and storytelling workshop. Hector Peterson students interacted with students from three Seattle schools-an elite private school, a girls’ school and an inner-city school.

The trip changed lives. The South Africans saw the real United States, not the media’s skewed portrayal, and U.S. students learned about the perils of living so close to violence. “I never knew about the racism and segregation that happened there,” writes a Seattle middle school student after the visit. “I thought it was only happening in the U.S.”

The students will continue their digital dialogue with South Africa, and teachers on the other side of the globe at Hector Peterson will sustain the program with an after-school photography class. In the fall, Seattle students and the Bridges team plan to visit Cape Town.

“The U.S. is too insular,” Borges says. “Geography scores in U.S. schools were shown to be some of the worst among nine industrialized countries. Bridges allows young people to learn with and from each other, not just about each other.”

Although most of Bridges’ work focuses on middle and high school, even elementary students glean an international perspective. Parents and students at Coe Elementary School in Seattle held bake sales and other fundraisers to send their principal, Dave Elliot, to a school in rural Northern Afghanistan that has no internet connection. He took letters from his students and returned with the same. The Afghan school is earmarked as one Bridges will help equip and nurture as a longtime partner.

Students are more motivated to learn, read and write, say teachers like Anne Baumgartner at Coe Elementary, when they are engaging directly with real people in real places around the world. They begin to listen and question, she says.

“Dear Movie Makers, The movie you made was wonderful,” emails fourth grade Seattle student Noah, who viewed a Bridges project created by children in India’s Tibetan Children’s Village. “I pray also, but I pray in a language called hebrew. Why do buddists spin prayer weels? Why do buddists chant prayers? I have lots of questions.”

Borges says Bridges has and will continue to raise and answer many such questions for students. “I have seen the effect that one person, guided by empathy and understanding, can have on a community,” Borges notes. “I truly believe this work can make very important contribution to a more peaceful and just world.”

2015 Update: BRIDGES and the Bridges’ curriculum has been adopted by Teachers Without Borders and now resides on their website: teacherswithoutborders.org