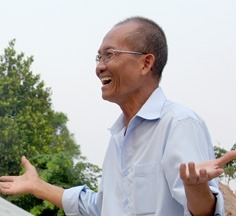 Chuk helps students and teachers in rural Cambodia by strengthening the relationship between school and community.

A native Cambodian who worked and raised a family in the U.S. for almost 30 years, Paul Chuk knew that educating children in rural areas had long been a problem in Cambodia, a country still recovering from the genocidal Khmer Rouge regime. Because of teacher absenteeism or unaffordable fees, 80 percent of Cambodian children drop out of school between third and sixth grades. So when Chuk lost his job as an ATM technician in 2008, he returned to Cambodia to help.

He took a job teaching English at Chrauk Tiek Elementary School, which receives support, including curriculum help and supplementary pay for teachers, from a Colorado-based nonprofit called Sustainable Schools International. The organization quickly saw his potential to be more than an English teacher, so a year after joining the school Chuk was appointed as its program director. After a year under Chuk’s leadership, Chrauk Tiek’s attendance rate tripled, and it became accessible to 1,200 students. Because of those achievements, Chrauk Tiek was named the top primary school in the district.

Chuk also helped a local community group supporting the school develop a microbusiness through which the group rents a power tiller to local farmers to improve crop production. Chuk also he supervised the construction of guest houses to develop volunteer tourism, and he piloted the Community Prosper Bank to help villagers gain access to credit and support teachers’ salaries through loan repayments.

Today, Chuk works with three nearby schools to help them replicate Chrauk Tiek’s successes. “I am the happiest I have ever been in my life,” he says. “I had no idea I would be good at this.”