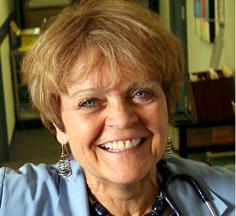 Wolff has worked to save the lives of 85,000 Haitian children through a peanut-based superfood.

St. Louis–area pediatrician Patricia Wolff first began volunteering on medical missions to poverty-stricken Haiti in 1988 with her two young children in tow. For 15 years she worked to alleviate sickness and hunger, which is especially brutal on Haiti’s children. “I lost count of the number of children I saw die,” she says.

Looking for a solution, she visited a malnutrition clinic in Malawi, where she saw starving children undergo a remarkable improvement in health after just a few weeks of eating a ready-to-use therapeutic food (RUTF): a shelf-stable mix of ground peanuts, powdered milk, sugar, oil, vitamins and minerals.

“I knew that if I could bring this mixture to Haiti, we could create a miracle,” she says.

And that’s exactly what she did in 2003 when she launched Meds & Food for Kids to bring Medika Mamba (“peanut medicine” in Haitian Creole) to the country’s children. She made the first batch in a small hand grinder and gave it to the 10 sickest children in an area clinic. “They went from lethargic and half-dead to running around the clinic in just a few weeks,” she says. “It was truly and astonishingly miraculous.”

Since then, MFK has saved the lives of as many as 65,000 children, with a treatment success rate of 85%. Hospitalization saves only a quarter of those treated.

MFK produces Medika Mamba in its Haitian-staffed factory using mostly local ingredients. The superfood has had such a remarkable impact that the factory now sells it to UNICEF and the World Food Program, making it a self-sustaining enterprise.

Dr. Wolff says of her encore career, “Every day I am rewarded with the healthy faces of children whose brains and bodies were in peril.”

2015 Update: To date, Medika Mamba (a peanut-based superfood) has saved the lives of over 165,000 Haitian children. It is produced in a dedicated factory by 56 Haitian employees. MFK also operates an extensive agricultural development program, which has educated more than 2,400 Haitian farmers since 2006. The introduction of appropriate agricultural chemicals, modern machinery and soil preparation methods allows small farmers to grow more and better peanuts, which are then purchased by MFK.