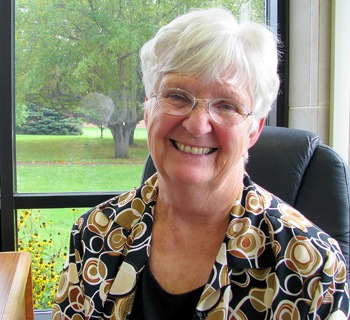 Engaging an army of adults as mentors for resettled refugees.

The fact that 90 percent of Fargo, North Dakota, residents are white would surprise few people. The city is known for its flat farmland, small-town values and history of Scandinavian immigration. But many would be surprised to learn of the recent wave of immigration in Fargo. A federal resettlement program has delivered thousands of refugees from more than 40 war-torn countries. Immigrants from Iraq and Somalia arrive with little knowledge of English, let alone how to apply for a job, food stamps or a driver’s license.

Enter Michele McRae, a retired language professor who has brought local residents and the refugees together to ease the transition – for everyone. She took a small pilot project engaging older adults as tutors for new Americans and turned it into a volunteer operation of more than 500 people who teach not only basic language skills but also help the refugees get their GEDs, pass driver’s license exams, find jobs and more. Giving+Learning is breaking down barriers across age, culture, race and ethnicity. It’s the American dream in the plains of North Dakota.

In the rural plains surrounding Fargo, North Dakota, Michele McRae is breaking down cultural barriers with an army of 500 primarily older volunteers.

“Where else in this community would you find a retired farm wife and grandmother whose grandson was killed in Iraq, sitting across a table teaching a Kurdish refugee from Iraq how to speak English?” asks McRae.

Fargo is famous for bitter winters, flat farmland and a population that is 90 percent white and Christian and mostly of Scandinavian-German descent. One in five is over 55. But an influx of refugees from more than 42 countries is changing those demographics, lured by a federal resettlement program and a strong low-wage job market. The shift has created tremendous challenges.

Michele McRae, 71, has brought the locals and the immigrants together, engaging citizens of all ages as mentors for the new Americans in a program called Giving + Learning.

“It’s such a simple concept, so doable and uncomplicated,” says McRae, a former English and French professor who was inspired by Nelson Mandela, international travel, and the time she had on her hands as a new retiree. “You bring together the gifts and wisdom of our oldest generation with the needs of our newest citizens. It’s a win-win situation.”

More than 3,700 refugees have arrived in the Fargo-Moorhead (Minnesota) area in the past 10 years through the resettlement program, and for more than 14,000 of the area’s 190,000 people, English isn’t the first language. Most came with few possessions from countries torn by dire poverty, civil wars and religious and ethnic persecution. They range from those with no formal schooling to highly skilled professionals with doctoral degrees.

The locals, meanwhile, often wonder why “these new Americans didn’t stay in their own country, don’t speak English, and are putting so much pressure on our health and school and welfare systems,” McRae says. But attitudes are changing, one person at a time.

When Giving + Learning was launched in 2001, McRae had three over-50 volunteers willing to teach English to three new arrivals. It was quickly evident that the newcomers also needed help in other areas: filling out job applications, earning driver’s licenses, finding elder- or child-care, or just shopping for groceries. Most were stunned by the 30-below winters, and they were either unaware of local assistance programs or unsure how to apply for them. They also tended to mistrust government authorities.

The older volunteers knew the ropes. “If the mentors can’t assist them, they know how to reach out to the agency that can,” says Cristie Jacobsen, cultural liaison for the Fargo Police Department.

McRae met with all kinds of local agencies to explain what Giving + Learning offered, and responded to every request from them for help. “It set the ball rolling and we’ve grown every year since.” Today, about 500 mentors, many over 55, are each giving an hour a week to help 600 newcomers learn the skills to build a new American life. And McRae works with more than 400 resource agencies to provide services to the newcomers and support her organization.

“Once the volunteers start, they rarely stop helping,” McRae says. “It’s not unusual that some have helped eight or nine different new Americans.”

Helen Glawe, a former teacher, has been a mentor since the program started. “I certainly have the time, and it makes me feel good,” she says.

“The program has been a miracle for me,” says Hatidza Asovic, an immigrant from Montenegro who now coordinates the Fargo Metro Interpreter Resource Center and just completed her first year at North Dakota State University. “It helped me earn my GED and still provides mentors when I have difficulty with my university assignments.” One key feature of Giving + Learning, she says, is that it sends mentors to the newcomers’ homes, which is critical for the elderly and mothers like herself.

“Doing something small, in my view, is the best way to start making a difference,” McRae says. “We’re not connected to any government or official agency, so we can make this very simple – – no focus groups, no endless meetings, no bureaucracy. If a new American needs help now, we’ll start immediately. No forms or applications required.”

Over time, Giving + Learning has hit a few snags, including one problem with transportation. With no busses running at night, many new Americans were driving illegally to get to and from their third-shift jobs. If they were stopped, it meant a $50 fine. The Fargo police asked McRae for help.

Mentors began coaching new Americans on passing the driver’s license exam. The mentors also did practice-driving rides with the newcomers, and Giving + Learning collaborated with the Metropolitan Council of Governments in a matching grant for driver’s training classes. So far, nearly 80 new Americans have gotten their licenses, and the number of tickets has declined.

Haditha Sulieman, who escaped the civil war in Sudan after six years in refugee camps, is one of them. “I was a physical education instructor in Sudan and I worked four years in factories in Fargo before I took my certified nursing assistant exam,” she said. “I couldn’t have done it without the Giving + Learning program. Michele has been like a mom to me.”

Giving + Learning has also helped new arrivals move toward American citizenship. Mentors are now working with 20 to 30 refugees studying for the citizenship exam, and more than 50 have been sworn in over the past seven years.

The need is growing. Ten to 15 new Americans seek help every month in Fargo-Moorhead, and McRae has opened new offices. In Pelican Rapids, 50 miles southeast, more than 30 percent of the town’s 2,300 residents are newcomers drawn by jobs at the West Central Turkeys packing plant. McRae started Giving + Learning there two years ago and already has more than 40 mentors working with Hispanic, Somali and Bosnian immigrants. She is also organizing a site in St. Cloud, Minnesota.

“Every connection we make comes with not one, but two stories: one from the mentor, the other from the new American,” McRae said. “They’ve all lived amazing and inspiring lives. It keeps me going.”