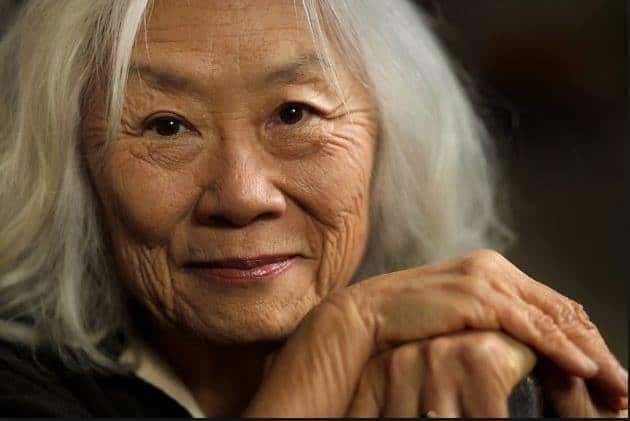 I am Maxine Hong Kingston, 74 years of age. I began taking war personally as a child during World War II. My mother was a refugee from China, where she was a medic during the bombing of Canton. Years later, two of my brothers were in the Vietnam War, and one of them returned with severe post-traumatic stress disorder, or PTSD.

Over time, I became a professor at U.C. Berkeley and authored nine books, including The Woman Warrior: Memoirs of a Girlhood Amongst Ghosts , but the problem of war stayed with me. I wanted peace for my loved ones, and for the world.

In my birthday month, October of 1991, I lost my father, then my house and neighborhood, and my novel-in-progress, in the Berkeley/Oakland firestorm. My trauma was such that I lost my ability to read. I needed a shout-out, ‘Encore!’ – or ‘Hana hou!’ as we say in Hawai’i.A phoenix of an idea came to me:Gather around me veterans, who have been through fire, and let’s write together.Write our way home.Write Peace.

During two decades, veterans of many wars answered my call – mostly veterans of Vietnam, but also of World War II, Israel, the Persian Gulf, the Dominican Republic, Guatemala, and now Iraq and Afghanistan. There are ‘veterans’ of Tiananmen Square and Philadelphia’s MOVE raid and bombing, and an uprising in Malaysia. Survivors of gang violence also came, identifying themselves as veterans, as did widows and children of soldiers, as well as peace activists. More than 800 people have participated.

For wont of a name, the veterans call our community The Veteran Writers Group. We have no formal organization; veterans prefer being underground. My hope is that with a calming practice and artistic expression, veterans can find peace and relief.

Unlike hour-long classes or therapy sessions, our group stays together all day, and sometimes through the night. A volunteer will teach a theme, lead meditations, establish silence for writing, hold space for everyone to read, chair discussions and host the breaking of bread.

The most important goal of this project is to build community, what Martin Luther King, Jr., called ‘the beloved community,’ and Buddhists call ‘sangha.’ The veterans come out of the isolation of PTSD – out of lonely apartments, out of the bush, off of the homeless streets.

I retired from U.C. Berkeley at the age of 65, but there is no retiring from the social good that it behooves each of us to do in this world.I am Buddhist, and take this vow seriously:’However innumerable the sentient beings, I vow to save them all.’So I have made a comeback – an encore.I am doing my life’s work.