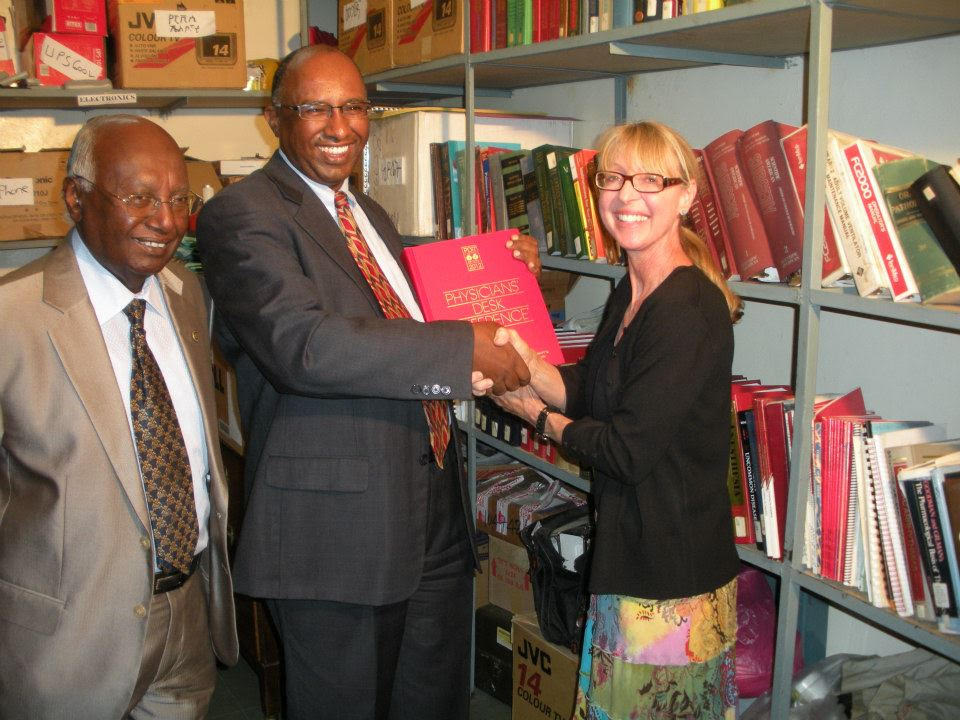 While building an antique business, Martha Franck Rollins became painfully aware of the disconnect between the people of privilege entering the front of her shop and the people in poverty living behind it. In 2001, she created Boaz & Ruth to help some of the 200 people released from prison each week in the Richmond area, spur commercial rehabilitation in a crime-ridden neighborhood, and form healing cross-cultural bridges in the racially divided city.

Today Boaz & Ruth maintains a used furniture store, a café and catering operation, a furniture restoration business, a home repair and furniture moving enterprise, and eBay sales – all to provide jobs and job training for ex-convicts, revitalization for the neighborhood, and revenue to run the program. Of the 50 who have entered the program so far, 22 have found full-time jobs. Only five have been reincarcerated – that’s a 10% recidivism rate, compared to the statewide rate of 30%.

The 7,500-square-foot headquarters of Boaz & Ruth in Highland Park, a blighted crime-ridden area in north Richmond, is a hive of purposeful activity. The main room of the cavernous converted carpet warehouse houses an antiques and secondhand store, where donated items, once cleaned and repaired, are ticketed for sale.

Next door, at the Diamond Cafe, Jon, an ex-offender, serves sausage biscuits, organizes catered events, and is working on getting his GED and heading to culinary school. Behind the warehouse, at Parable Restoration, Linda Weiss, 60, learns from a master craftsmen how to strip and bleach a mahogany curio for a client who wants it lightened.

Just down the street, Calvin Carter works with a volunteer and an ex-offender to gut and rebuild a 102-year-old Victorian house bought for $8,000. Carter, an ex-offender himself, is now a graduate and board member of Boaz and Ruth, a nonprofit, faith-based, ex-prisoner work/life training and rehabilitation program established by a former antique dealer Martha Rollins in 2002 to meet the needs of some of the 200 prisoners released each week in the Richmond area.

Rollins, a driven woman who believes in squeezing multiple outcomes out of any effort, didn’t stop at that ambitious mission. She created Boaz & Ruth to also spur commercial rehabilitation in a crime-ridden neighborhood and form healing cross-cultural bridges in the racially divided city.

“During my 30 years as an antiques dealer,” Rollins says, “I saw the tremendous resources of Richmond’s wealthy entering the front door of my shop and the severe need of the poor and often jobless folks living just outside the back door.” At age 51, after a double mastectomy, Rollins began to share her vision of change with others. At age 59, in 2002, she opened Boaz & Ruth.

An antique store, cafe, and furniture restoration business on site provide jobs for the community, job training for apprentices (ex-offenders and others down on their luck), a destination for shoppers, and revenue for salaries and program expenses. The entire enterprise runs on the relationships between volunteers, donors, employees, ex-offender apprentices, program graduates, shoppers, and people who wander over just because they’re curious.

To Rollins, rehabilitation of a prisoner means more that just a computer training course and GED coaching (although these services are provided). It means instilling confidence through a one-year, 50-hour per week schedule combining work, classes and counseling, for which apprentices are compensated with either a stipend or room and board. It also means changing an entire society’s stigmatizing attitude toward ex-prisoners — a task not quite as quantifiable. (Still Rollins may have made inroads when she staffed her antique-filled house with ex-prisoner guides during a garden society tour.)

All of those who come to Boaz & Ruth are unemployed. Out of 50 who have entered the program so far, 44 were ex-offenders, 42 had prior substance abuse problems, 48 had no driver’s license, and 44 had no computer skills. Today, of the 50, 22 have found full-time jobs. Only five have been reincarcerated – that’s a 10 percent recidivism rate, compared the statewide rate of 30 percent.

Born to a wealthy textile family in Martinsville, Virginia – a town once called the sweatshirt capital of America — Rollins had it all. Talented and charming, she eventually earned a full scholarship to Duke University. She could have spent the rest of her days lounging in her town’s country club, as her family had built it.

But Rollins had a stubborn entrepreneurial streak, evident from her childhood days. Charged with babysitting her little brother, Rollins used extra space in his stroller to load in Girl Scout Cookies and lemonade. She then wheeled him about town earning babysitting money while also nabbing the Girl Scout prize for most cookies sold. Her sister recalls vicious and manipulative family Monopoly games — “I would go to bed in tears” she says. Rollins and her father, CEO of a large textile company, played for hours afterwards, vying for control.

By the early ’70s, Rollins had two degrees from Duke, a marriage to a successful lawyer, a beautiful home in a diverse part of Richmond, and a maid to help with the house and kids. She found herself bored and lacking vision. “I realized I really didn’t like being a woman,” says Rollins. “I would have liked to run dad’s business. Even with all the opportunities I had, I felt imprisoned.”

“People perish without a vision,” says Rollins. “Without a vision, you become stagnant.” Even though she already had young children of her own, she fostered a troubled, physically disabled teen and attempted to adopt her. When that effort failed, Rollins channeled some of her distress into opening an antique shop, Martha’s Mixture.

She continued working in antiques for the next 30 years, eventually owning the most successful antique shop in Richmond. Her store is now so self-sufficient that she’s handed over the reins to her employees and her husband. “It’s the ultimate legacy if you can set up something that stands without you,” says Beverly Binns, head of estate sales.

The name Boaz & Ruth is based on Rollins’ belief in the transformative power of relationships. As young woman, the Biblical matriarch Ruth is an outsider fallen on tough times. To eat, she takes to gleaning fallen grain from the fields of Boaz, a wealthy Israelite. The two eventually marry, lifting Ruth out of poverty, bringing more land to Boaz, and producing a line of descendents that would come to include King David – an ancestor of Jesus.

“The old service model is in just doing things for people,” says Rollins. “But there’s a great power that comes out of doing things with people. It’s not just ministry service to the poor; it’s also ministry to those who have wealth. Having grown up wealthy, I know how needy that category of people can be.”

Seen as a privileged outsider, Rollins had to overcome deep suspicion in the community. “I did not trust her myself,” says Bonnie Dowdy, who now runs Beyond Dialogue, a multicultural film screening series and discussion sessions at Boaz & Ruth. “Doing an antique shop in a poor community? I felt like this is a white woman here to make some money.”

Rollins soon won over key allies with her sincerity and a finely tuned cultural sensitivity. Rosa Jiggetts, an African American community activist who says she had a deep distrust of white Americans, first met Rollins in the streets of Highland Park. Rollins immediately asked Jiggetts to come with her on a trip to New York– a trip that would force the two women to squeeze into her daughter’s apartment and bunk up like school girls. Today, Jiggetts calls Rollins her soul sister.

In just four years, Boaz & Ruth has grown exponentially. The first year Rollins opened the training operation with two employees; re-entry training began a few months later. By 2005, she had added a second store, a café, catering, repair and restoration, home repair, furniture moving, and eBay sales. Today Rollins has a staff of seven; joined by 23 trainees and post-graduates who all work there.

Having graduated four out of seven apprentices her first year, eight apprentices in the second year, and 16 scheduled to graduate this fall, Boaz & Ruth isn’t yet working at full capacity. Rollins intends to double the number of graduates each fall and has taken a lease on a 20,000-square-foot facility where she plans to expand the program to 200 ex-inmates a year.

By 2008, Rollins hopes that she will be able to turn over day to day operation of Boaz & Ruth in Richmond so that she can focus on establishing the organization in other cities.

“If you ever feel like you’re finished learning, that’s when you’re dead, I think,” says Rollins. She keeps a running tally of books, writing, and tasks she’s “saving for the home,” meaning the nursing home. But considering her 86-year-old mother still drives and plays the organ, and her 89-year-old father tools around the Virginia countryside in a huge bulldozer as his “geriatric sport,” Rollins is a long way from the imagined calm of retirement.

Until then, Rollins remains poised to live up to the adventures that she sees all around her. A horse she inadvertently won in a silent auction led her to take up competitive riding and jumping at age 46 — a sport she continues to devote herself to. She’s been known to hire the pizza delivery man to work for her company — part of her pattern of hiring, and mentoring wherever she goes. “I try to live life like a dance, listening to the spirit to tell me what’s the right thing to step into at this time,” she says.

And in the intricate foot work and grand ambitions of Boaz & Ruth, Martha Rollins may have found the ultimate partner.