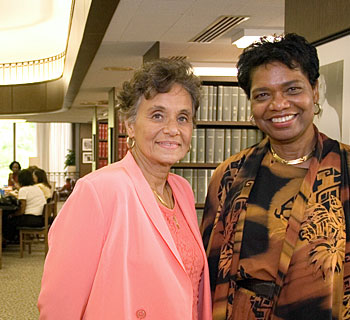 African American women are dying at rates that are greater than any other group of women in the United States — and most of these deaths are preventable. That fact inspired Marilyn Gaston (left) and Gayle Porter (right), both accomplished health professionals to change their focus and write Prime Time: The African American Woman’s Complete Guide to Midlife Health and Wellness in 2001. But information alone wasn’t enough to meet the need.

So in 2003 they created Prime Time Sister Circles – part health course on exercise, nutrition, and stress, and part support group – to change how African American women approach their own health, and thus the health of their families and communities. Meetings, which take place in convenient community locations, such as churches and community centers, encourage goal-setting, peer support, and empowerment. To date, 130 women have participated in pilots in three states and the District of Columbia; 68% of them have maintained their health improvements for more than a year.

Dr. Marilyn Gaston is one of the world’s foremost experts on sickle cell disease, the first African American woman to direct a U.S. Public Health Service bureau, and the second to serve as Assistant Surgeon General. But all her education and experience didn’t make it easier for her to manage her own health risks.

“I was 45 when I finally quit smoking,” Gaston says. “It was almost as challenging as finishing medical school.”

Understanding firsthand how hard it is to be human and healthy — bringing psychology to medicine — is one reason Gaston, 67, and Gayle Porter, 60, the first African American psychologist on staff of the Johns Hopkins School of Medicine’s Child & Adolescent Child Psychiatry Department, have been so effective in changing the health behaviors of African American women.

Through 14-week support groups called Prime Time Sister Circles, the doctors conduct interventions for African American women between the ages of 40 and 70 aimed at changing how the women approach their own health, and thus the health of their families and communities.

And no demographic group is so ripe for a culture change. “It doesn’t matter whether we are well-educated or have money,” says Gaston & Porter. “African American women suffer disproportionately from life-threatening diseases. They’re twice as likely as American Caucasian women to suffer from cardiovascular disease, three times more likely to have diabetes, and at twice the risk for cancer. They are also more likely to experience stress and depressive symptoms.”

African American women also have a traditional mistrust of the medical system and may lack health insurance and access to quality medical care. Even with equitable medical insurance and income, black women regularly receive fewer diagnostic tests and inferior services when compared with Caucasian women or even with African American men.

Porter and Gaston launched Prime Time Sister Circles almost by chance. Chatting on the phone one day in 1996, the doctors discovered that along with former D.C. Mayor Sharon Pratt Kelly and actress Pam Grier, they were both booked for a Black Entertainment Television special on African American women in midlife.

The day after the show aired, both doctors found their offices flooded with phone calls from viewers who wanted to learn more. The incredible response spurred the pair to begin a four-year odyssey researching African American women’s health.

There wasn’t much information to work with. Until about 15 years ago, drug trials and clinical research were performed primarily on white men and the results extrapolated to women and minorities. Not until 1993 did federal legislation mandate that all research funded through the National Institutes of Health include women and minorities.

“Not only was there a paucity of information, but much of it was incorrect,” says Porter. “For instance, with depression, African American women were listed as having the same symptoms as Caucasian women, but they’re often different. If an African American woman goes into a physician’s office obese, angry, and agitated, it’s different from what doctors traditionally learn about depression, so no wonder no one thinks she’s depressed.”

Working on evenings, weekends, and through vacations, the doctors emerged in 2001 with the holistic self-help workbook Prime Time: The African American Woman’s Complete Guide to Midlife Health and Wellness published by Random House.

Prime Time proved a success with African American women, but readers wanted more. In the book, the doctors suggest that women form their own Prime Time Sister Circles ” support groups, but many readers asked for help getting the circles off the ground.

Circling Back to Health

Eleven women seated around a large conference table in the library of Florida Hospital in Winter Park, Florida, are graduates of the first wave of grassroots health support groups. These women had all previously known they should exercise, eat right, and reduce stress. But somehow it took meeting regularly to make change happen.

“I’m addicted to Pepsi and I would have drunk Pepsi for the rest of my life had I not been in this group,” claims Madeline Jones, 49. Some women report other changes. Elaine Cauthen, 51, has worked up the nerve to ask her church to stop serving ham and macaroni and cheese every Sunday. Fifty-six-year-old Beverly Talbot has a new habit of power walks with her husband.

So far, more than 130 women have participated in the Prime Time Sister Circle pilots in three different states and Washington, D.C. With state and foundation funding, the groups meet for weekly two-hour sessions that take place over ten weeks. Facilitators conduct the Circles using a curriculum which includes a variety of health issues with a particular emphasis on taking care of oneself. Experts are utilized in the areas of exercise, stress, and nutrition. Every week each member must verbally set a goal for the next week and then report back on her results, culminating in a course-long goal. According to Gaston and Porter, one year later, about 68 percent of women maintained their lifestyle and health improvement.

Perhaps the most powerful message of the Sister Circle is not just empowerment over health, but empowerment over all areas of life made possible by community support. The women realize by taking care of their physical and mental health first, they can function better in all areas of their lives. Broccoli-loving Cathy Clark credits Sister Circle for helping her follow through on her goal of starting a nursing agency

Empowerment is an idea that resonates deeply through Porter and Gaston’s lives. Both women grew up poor. Porter, the oldest of five children, was raised in Cabrini-Green, the notorious Chicago public housing development. Porter recalls her childhood fondly as one filled with an extended family support network and a culture of helping others.

“We lived in the projects, but my mother would still bring homeless people in to stay with us,” says Porter. While in elementary school, she won a scholarship to attend a Catholic high school — an opportunity that allowed her to experience first hand the power of money and made her more determined to expand the options available to poor people..

Gaston, who grew up in a public housing project in Cincinnati, says she faced more outright racism. But her life was also filled with family support and examples of very strong black women.

“My godmother single-handedly integrated the public pool,” recalls Gaston. “Every Saturday morning she got us up and forced us to go swimming. We didn’t want go, we’d say, ‘They don’t like us! They’ll call the police!'” But every summer Saturday, Gaston and her peers were unwilling civil rights activists. The black children went into the pool, the white children got out of the pool, and the police came. The episodes went on not for weeks or months, but for years. “People saying things to you, calling the police on you. That does toughen the skin,” says Gaston.

When Gaston was 12, her mother collapsed from uncontrolled hemorrhaging due to undiagnosed cervical cancer. Without health insurance or transportation to access health care, her mother was not receiving medical care and therefore her disease was not prevented or diagnosed and treated early. Her mother survived, but the incident left Gaston with a deep-seated resolve to become a doctor and help the poor, underserved, uninsured people to access medical care.

Gaston enrolled at the University of Cincinnati College of Medicine, one of only six female students, and the only black female. “I probably faced more discrimination as a woman than as an African American,” says Gaston. She credits those Saturday morning swims for carrying her through a daily gauntlet of rude comments that caused some of her white classmates to drop out.

The doctors went on to have brilliant careers in their respective fields. They spent their lives pursuing their passions, but as they grew older, they found their passion and purpose had changed. Gaston retired at age 63, Porter at 59.

Driving in dusk through the outskirts of Orlando, Porter reflects on what turning 60 means to her. “I value each age, but I have no desire to go backwards,” she says. “If I had to give up all the wisdom that I’ve gained in order to stay up a little later or have one less arthritic pain, it’s not worth the trade off.”