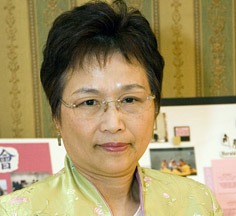 When Lucy Young was diagnosed with breast cancer in 1987, she was a pastor’s wife in Queens, N.Y., and terrified of death since her two children were just 9 and 10 years old. The Chinese-American, who was more comfortable speaking Chinese than English, was afraid to discuss a taboo topic with her Chinese friends and couldn’t find any Chinese-language cancer resources.

After she beat the cancer, in 1992 Young and several friends held the first meeting of their Chinese cancer support group in her living room. A year later, the American Cancer Society asked Young to help launch the organization’s first Chinese unit. Cancer is the second leading cause of death for Asian-Americans, after heart disease, according to the federal government.

Fast forward to 2001, when Young was in her 50s, had risen to a high-profile role with the American Cancer Society and had moved with her family to southern California. Deciding she could have a bigger impact with her own organization, in 2002 she quit her job and founded the Herald Cancer Association at a Chinese Christian Herald Crusades.

The Herald Cancer Association’s bilingual staff provides Chinese-language referral services and resources, patient- and family-support programs, community events and more. In the past decade, the association has provided support to more than 800 breast cancer patients and more than 2,000 cancer patients in Los Angeles. It now has cancer ministries in northern California, San Diego, Houston and New York.

Young, who battled a second round of breast cancer in 2003, says, “I laid aside my financial security to work for those whom I feel are underserved, to get their voices heard. In doing so, I found, to my surprise, that I have, in fact, made a living out of a dream.”