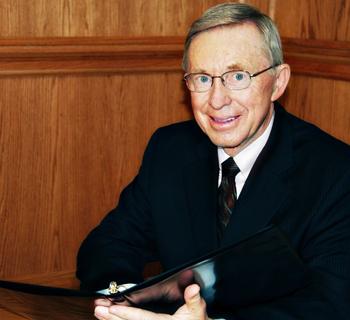 Striving to end chronic homelessness in Utah, Pendleton is helping to create stable housing and build community support for programs that serve the homeless.

More than 15,000 Utahns are projected to be homeless this year – most for only a few weeks because they receive support from family, friends, and social services. Pendleton is especially concerned for Utah’s approximately 1,500 chronically homeless people. Research shows that many of those individuals – 10 percent of the homeless population – battle mental health and substance abuse issues and use more than half of the services available to the homeless. A few years ago, while attending a national conference on chronic homelessness, Pendleton felt inspired. After retiring as an executive from the Church of Jesus Christ of Latter-day Saints in 2006 at age 67, Pendleton became director of the Utah Homeless Task Force. With his guidance, the task force has implemented Housing First, a model designed to find housing and income and provide case management for the chronically homeless. Salt Lake County, where the task force is located, experienced a 24-percent decrease in its chronically homeless population from 2008 to 2009. By the end of 2009, Pendleton will have presided over the creation of more than 500 housing units for the chronically homeless. He says: “I want to inspire others to begin looking at the homeless issue with fresh eyes and encourage them to step in and make a difference.”