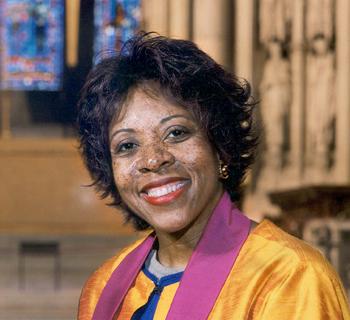 As a seminary student in 1995, Tarry-Chard traveled to a conference in South Africa hosted by Desmond Tutu, then archbishop of Cape Town. During a church service, she heard an inner call to help the women and children she encountered in the squalor of the townships. Within weeks of returning to the United States, Tarry-Chard founded Project People Foundation to provide and support education, employment, and entrepreneurship programs benefiting South African women and youth. In South Africa, nearly a quarter of the population is illiterate, while unemployment rates hover around 25 percent. Black women have the highest unemployment rate in South Africa, the lowest salaries, and the least access to employment opportunities. Tarry-Chard’s foundation has established programs to help impoverished South African women learn skills that enable them to achieve financial independence. Foundation programs have trained more than 1,000 women in Johannesburg and Cape Town to make hand-crafted items, allowing many of the women to launch their own businesses. The foundation also has helped poor South African children attend school without stigma or threat of expulsion by supplying more than 1,700 school uniforms. “My work continues to be guided by what I saw and felt on that first trip,” says Tarry-Chard, now 61 and an ordained minister.