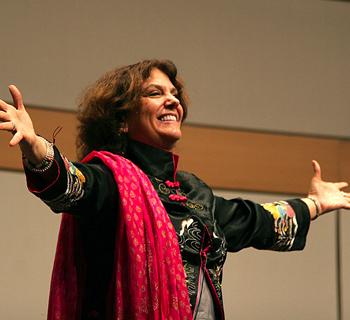 Helping children of war heal through the arts

After more than 30 years as a storyteller, writer and teacher, Laura Simms was an Artist in Residence at the Lincoln Center and traveling in Sierra Leone when she met a young orphan, a former child soldier. She adopted him. After watching her son, his friends and others recover from the trauma of their nation’s long civil war, Simms set up the Life Force Project in 2007 to give young people affected by war an opportunity to heal. Simms uses storytelling, photography and listening exercises to reawaken the youths’ resilience, help them find their voice and regain a sense of self-worth within their cultures. Each listener, drawing out the memories of trauma and fear, becomes an active participant in a process that builds empathy and self-respect. After the September 11 attacks, Simms published Stories to Nourish the Hearts of Children in a Time of Crisis and another book to benefit children’s education in Afghanistan. Her manual, Becoming the World, is used by thousands of teachers and psychologists worldwide in addressing issues of tolerance and resilience. “The two boys told horrifying tales of loss and terror; their soft voices belied the violence they described. It changed my life. The idea took root that I could move from being a performing storyteller to someone who worked for the benefit of children using what I had learned over 35 years of my career.”