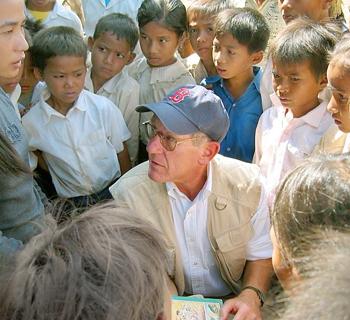 Bacon transformed Refugees International into a leading voice for peacekeeping, developing sustained, focused initiatives — rather than jumping from crisis to crisis, as in the past.

During the Clinton administration, Bacon was a familiar face on television as the bow-tied Pentagon spokesman updating reporters on the war in Bosnia and other military action. When he accepted a less visible post as president of Refugees International in 2001, he brought a journalist’s sensibility to the humanitarian organization, overhauling its communications operation to effectively tell the story of refugees’ plight. “One of the most rewarding parts of the job is sharing what I know, particularly in the field of communications, with a much younger staff,” Bacon said. “They, in turn, have taught me about Facebook, Twitter, and other networking operations that have become an important part of nongovernmental organization outreach.” Bacon molded Refugees International from a largely volunteer organization into a focused nonprofit with a multilingual staff of nearly 30. Under Bacon’s leadership, Refugees International pressured the federal government to allocate $200 million in humanitarian funding to Iraqi refugees from Oct. 2007 to Sept. 2008 and admit 13,784 Iraqis during that time span, nearly six times the admissions in the five prior years combined, according to the organization. Until his death at age 64 on Aug. 15 of melanoma-related complications, Bacon spotlighted what he considered the biggest developing story for refugees: the coming displacement of as many as 150 million people due to climate change.